Since Governor Walz taught geography for 20 years he must be aware of wetland-saturated northern Minnesota and the effect of water extraction on Native ricelands, especially in a drought year.

The Walz administration did a pro forma appeal via the Department. of Commerce. He’s playing both sides.

The Governor’s conundrum is that while he positions himself against fossil fuel use exacerbating climate change, he champions Line 3. Currently Line 3 can transport 390,000 barrels of oil daily. The new line would double that capacity to 790,000 barrels per day cutting across Native ricelands.

The Minnesota Chamber of Commerce in September of 2017 declared that an increase of imported tar sands oil is not needed. Chamber Commissioner Steve Kelley was removed from office by the state senate in 2020. Laura Bishop, Minnesota Pollution Control Agency commissioner, resigned in July 2021 just before a senate vote against her confirmation threatened.

After these selected vacancies of state environmental leadership and three years of modified paperwork, the need to double imported Canadian tar sands oil was reassessed and Enbridge’s Line 3 project was okayed.

In fact, the Minnesota Supreme Court is still reviewing an appeal of the Line 3 project based on declining need for increased fossil fuel brought by Honor the Earth, White Earth and Red Lake Anishinaabe bands, Sierra Club, Friends of the Headwaters and Youth Climate Intervenors.

Meanwhile the latest Enbridge Line 3 construction complication is a massive 5-billion-gallon dewatering scheme because the corporation failed to research the wetland-prone topography. Despite drought and the necessity for a water-rich rice-growing environment, groundwater is extracted and pumped away from below construction trenches to higher ground until after the pipe is laid and covered.

Since Governor Walz taught geography for 20 years he must be aware of wetland-saturated northern Minnesota and the effect of water extraction on Native rice-lands, especially in a drought year. 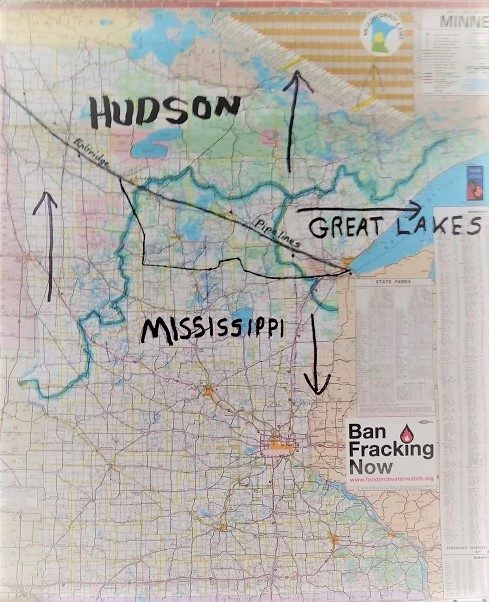 Minnesota is home to the headwaters of the three major North American watersheds that drain north to Hudson Bay, south down the Mississippi River to the Gulf of Mexico, and east out the Great Lakes and St. Lawrence River to the North Atlantic Ocean. Slicing across all three watersheds are two black Enbridge tar sands oil pipelines from North Dakota to Superior, Wisconsin. The southern pipeline is the new “replacement” Line 3 that would carry more than 31-million gallons of oil daily, with a huge dump of carbon emissions into the earth’s atmosphere.

On July 6, Enbridge construction workers accidentally spilled 80-n to 100-gallons of drilling “mud” into the Willow River near Palisade, in what is called a “frac out.” After the spill was reported by water protectors, an Enbridge mitigation team cleaned-up the spill and declared “no long or short term” environmental impacts. Enbridge did not announce the accident until July 13, after the clean-up was completed.

In 1991 near Grand Rapids, the Enbridge Line 3 pipeline ruptured discharging 1.7-million gallons of oil. From the 2010 Enbridge pipeline leak near Kalamazoo, Michigan, 800,000 gallons of tar sands oil required years of clean-up costing more than $1-billion. The unsuccessful cleansing efforts finally resulted in digging up the creek bottom and heating, baking it, which transferred the toxins from the soil into the air.

The price of refining extremely dirty sands oil makes it almost prohibitive except for the economic concept that a finished good should cost more than production costs in order to make a profit. Production costs include PAC (political action committee) “contributions” as well as fines and court expenses against Anishinaabe and non-Indian environmental legal challenges by land defenders.

Article 6, Section 2 of the US Constitution declares that all treaties “shall be the supreme law of the land.” Every single treaty between the United States and sovereign Indian nations has been violated. Because the seven federally recognized Anishinaabe bands in northern Minnesota have different positions on a new route for the tar sands oil pipeline, Governor Walz can play them off against each other.

The idea that “the Indians” speak with one voice is simplistic, not to mention racist. The Democrats, split between environmentalists and developers, don’t speak with one voice. This lockstep thinking keeps the dirtiest oil in the world gushing across the headwaters of the Mississippi, Hudson Bay and Great Lakes/Laurentian watershed divides.

If Line 3 ever goes on line, it would be equivalent to 50 new coal-fired power plants. An expected 50-year lifespan for a new Line 3 would enable the fossil fuel economy for another two generations.

Donate
By Rise Up TimesPublished On: August 10th, 20211 Comment