Zuckerberg and tech CEOs challenged over misinformation: ‘You do it because you make money’ – as it happened 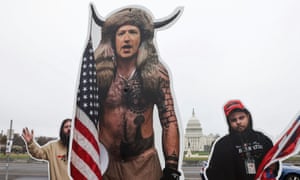 An art installation protest by the group SumOfUs portraying the Big Tech CEOs as key insurrectionists after they allowed their platforms to be flooded with election disinformation and conspiracy theories. It’s time for Congress to hold these companies to account. Photograph: Jonathan Ernst/Reuters

And with that, we are done (for now)

(See below for links to descriptions of testimony)

That wraps up the last statements of the Congressional hearing called Disinformation nation: social media’s role in promoting extremism and misinformation. In some ways it felt a lot of ground was covered during the six-hour questioning marathon of the three most powerful men in tech, but in others it is not clear what concrete action will be seen from the latest in a long line of panels on misinformation and hate speech.

As has happened in past hearings on the matter, Republicans repeatedly claimed conservative viewpoints are maligned on social platforms while Democrats argued that something must be done about misinformation and hate speech. Special attention was paid to how hate speech impacts minority communities including the LGBTQ+ community, the Black community, Asian Americans, and Spanish-speakers.

Zuckerberg frequently spoke in favor of reforming Section 230, a law that exempts platforms from legal responsibility for what is posted by users. Meanwhile, Dorsey put forward his plan of allowing for an open protocol shared by tech platforms to make for more transparency surrounding how content is moderated. He also expressed that Twitter would like to open its moderation operations up to outside researchers for review.

In the six hours of interrogation, Dorsey was the only one of the three executives who accepted any form of responsibility for the insurrection on 6 January.

No follow-up hearings on this particular subject were mentioned today, but the House financial services committee previously this year said in an antitrust hearing that there would be more to come – so we can expect to see these executives back on the Hill soon.