Editor’s Note: Click the titles to view the full articles.

Will the US end military domination to save the planet?

The issue is not new to the military. For more than a decade, the Department of Defense has acknowledged the implications of climate change and rising seas on its own installations and as a driver of conflict around the world.  What it has not yet done is connect the dots regarding how the current strategy of global military primacy contributes directly to the existential threat fueled by CO2 emissions.

When will America free itself from war? 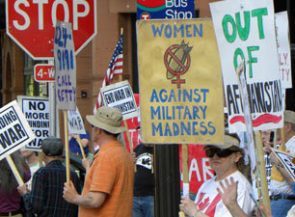 “This is a different kind of war, which we will wage aggressively and methodically to disrupt and destroy terrorist activity,” President George W. Bush announced a little more than two weeks after the 9/11 attacks.  “Some victories will be won outside of public view, in tragedies avoided and threats eliminated. Other victories will be clear to all.”

Passed in the hours after the 9/11 attacks, the 2001 AUMF is the foundational law of our nation’s endless wars. The modern equivalent of a declaration of war, Congress passed the AUMF with only one notable and heroic dissenting vote by California Representative Barbara Lee who warned then that the AUMF was a blank check for a global, endless war. Indeed, today’s bipartisan consensus for repeal is built around the acceptance that this warning has has been vindicated.

Stephen Miles is the Executive Director of Win Without War.

That discomfiting truth is reemphasized each time the president-elect nominates a new national security official for his incoming team. It hardly takes a prophet to predict the sort of characters Biden trusts to caretakers America’s imperium.

Donate
By Rise Up TimesPublished On: January 28th, 2021Comments Off on End This Endless War…this Endless Militarism