Out of Iraq! No War on Iran! and Sami Rasouli on Iraq Caught in the Crossfire

Iraqis have been resisting since the U.S. military invaded in 2003. Rationales provided for the U.S. presence have varied over time. From 2014, the U.S. was in Iraq supposedly to help defeat ISIS, but who believes it?

Only recently, on December 29, the American Air Force bombed Iraqi militia group Kata’ib Hezbhollah, which was on the Iraq-Syria border to defend against ISIS. The U.S. bombing, which killed 25 militiamen and wounded more than 50, was supposedly in retaliation for a U.S. civilian contractor death caused by a rocket fired into a U.S-Iraqi military base.

The militia group is part of Iraq’s Popular Mobilization Forces (PMF). As of 2016, largely due to the PMF’s success defending against ISIS, the PMF was officially incorporated into the Iraqi Armed Forces through an act of Parliament ¾ so the U.S., had in effect, bombed a component of the Iraqi state. (Protesters, stoked by anger at the attack, stormed the U.S. embassy in Baghdad two days after the bombing incident. Trump responded by sending more U.S. soldiers to the area.)

Then, on June 3, came the shocking murder by U.S. drone at the Baghdad airport of PMF Deputy Commander Abu Mahdi al-Muhandis and three other Iraqi officers, along with Major General Soleimani of the elite Quds force in the Iranian Revolutionary Guard. Foreign press reported that Soleimani had come to Iraq on a diplomatic mission to provide a response from Iran to a message from Saudi Arabia in an attempt to de-escalate tensions in the region, but it turned out to be a setup for assassination meant to inflame Iran.

The Iraqi Parliament called an emergency session on January 5 and decided that the U.S. must leave the country immediately because it has violated Iraq’s obligations, affronted its sovereignty, and jeopardized its stability. Virulently anti-Iranian U.S. Secretary of State Mike Pompeo quickly dismissed any intent of withdrawing troops. There goes the rationale about bringing democracy to the Middle East. 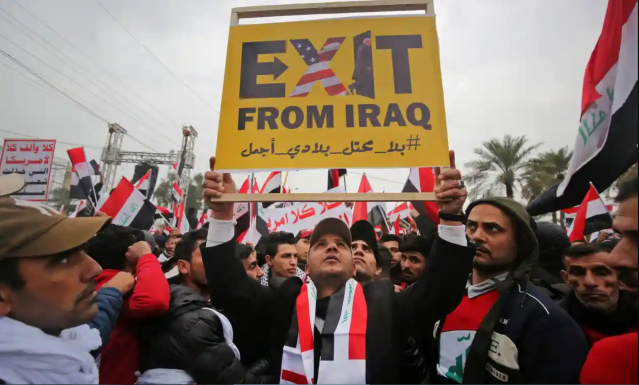 The Million Man March was called by populist Iraqi leader Muqtada al-Sadar and Iraqis flooded into the streets on January 24, bearing Iraqi flags and signs demanding that the U.S. leave. Al Jazeera reported a wide range of participants including rival mainstream Shia parties and Popular Mobilization Forces with Iran-backed groups, leaving no doubt that Iraqis want the U.S. out.

In the U.S., nationwide protests were called for January 4 and January 25, and thousands in cities across the country experienced déjà vu as “Out of Iraq” and “No War on Iran” signs appeared again. Important: be sure to read Sami Rasouli’s on how we feel in Iraq.

Iraq Caught in the Crossfire—from a letter by Sami Rasouli

Iraq is in the crossfire with the competition of foreign actors and use of the nation, each for its own interests. After WWII, as part of the Marshall Plan rebuilding industrial Europe as its ally against Russia in the Cold War, the United States decided oil from Middle Eastern sources was needed. Truman’s Defense Secretary James Forrestal said: ‘It [the Marshall Plan] wouldn’t have succeeded without access to Middle Eastern sources.’ The U.S. and its allies were determined to prevent any other force from controlling the region. Israel has been allowed to fly over Iraqi air space to bomb Syria, where the U.S. and Russia have engaged militarily. The U.S. is endangering Iraq with its threats to Iran, which defends itself in the region. Other foreign forces continue to use Iraq in their own interests.

About the subject of how we feel in Iraq toward whether the U.S. forces should stay or leave Iraq – I would like to share my thoughts:

The Constructive Chaos concept for the Middle East, announced by then National Security Advisor Condoleezza Rice and carried out since the U.S. invasion of Iraq 2003, was creating and supporting extremist religious organizations such as Al Qaeda and ISIS to spread death and destruction across the cities in the Arab countries.

The American presence can spur extremist activity, as evidenced by the growth of various anti-American rebellions and groups that had not previously existed throughout the Middle East since the invasion of Iraq.

The American presence sets a target for American forces to be attacked by extremist elements, while also operating as a tripwire for a potential destructive and tragic war with Iran.

The U.S. administration is continuing its Maximum Pressure campaign to pressure the Iranian regime and is, by its nature, a policy of escalation. Maximum Pressure is bringing the United States closer to another war in the Middle East. It has certainly done nothing to make negotiations more likely.

The U.S. should leave the entire Middle East.

UPDATE: The U.S. has plans to build three more bases in northern Iraq near the border of Iran, according to a January 27 report from the military-industrial source Breaking Defense. It is now widely reported in the media that the U.S. wants to install Patriot missiles in Iraq but approval is currently withheld by the Iraqi government. But does approval matter?

← March on the Pentagon Rages Against the War Machine, by Emma Fiala
Chris Hedges: What Is Happening to Assange Will Happen to the Rest of Us →