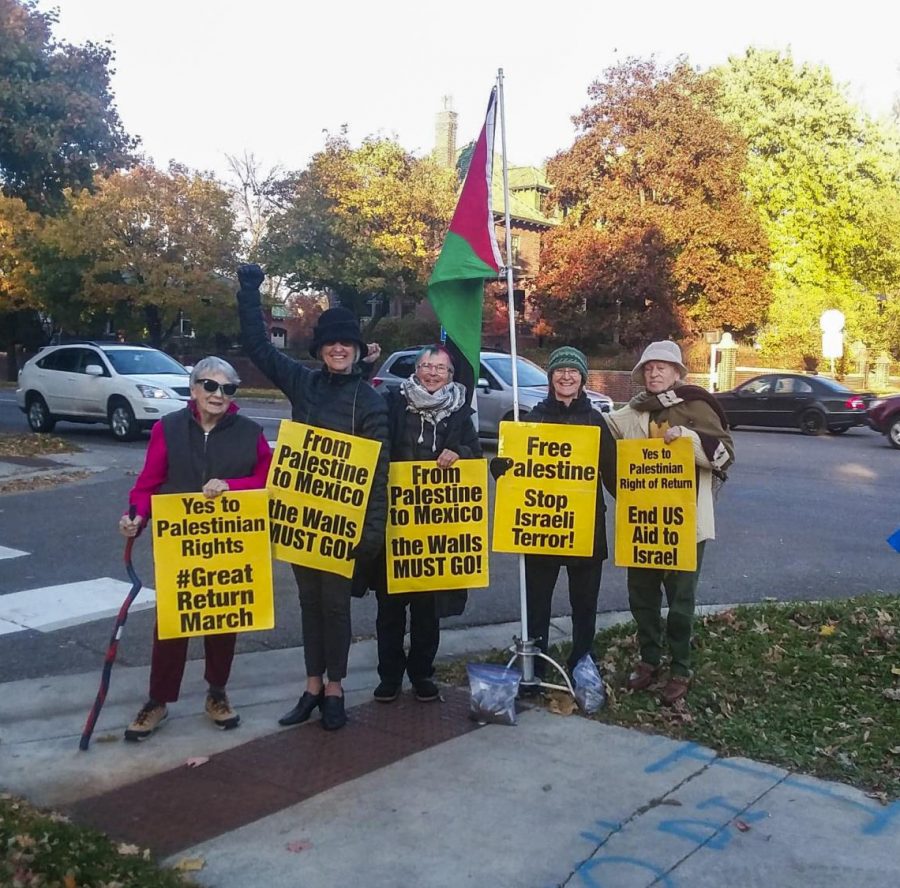 Every Friday afternoon, a small group of women gather on the median at the intersection of Summit and Snelling Avenues and hold an hour-long demonstration for peace in Palestine. Standing under a Palestinian flag, the women chat, wave at drivers and pedestrians and lift signs with slogans like “From Palestine to Mexico, the WALLS MUST GO!”, “Free Palestine, stop Israeli terror” and “Yes to Palestinian Right of Return, end US aid to Israel.”

“It’s been happening on [and off] since the eighties,” Martin said.

The vigil garners plenty of response from passersby. Every few minutes, a driver honks or waves in support. The women respond with raised fists and cheers.

Some observers are especially enthusiastic — a few thank the women as they walk or drive through the intersection. Last Friday, a young woman paused as she crossed the street to kiss the Palestinian flag.

“That has really changed over the years,” Martin said of the support.

Before about 2015, she said, people tended to be much more negative.

“The public’s attitude toward that situation has changed,” Martin said. “Many more U.S. citizens are aware of what’s going on.”

The women cited violence in Israel and aggression towards Palestinians as the targets of the protest.

“I’m pro-freedom for Palestinians — at least self-determination — because they have none, and they haven’t had any since they were basically kicked out of the country,” Sara Olson, another vigil organizer and long-time participant, said.

While these same few women are usually in attendance, more people tend to join the vigil when major events put Palestine in the headlines. The vigil has gained notoriety for its consistency.

“Now when something happens, when Israel does something to Palestine, people will come here — and then it gets much bigger,” Martin said.

The women are all volunteers with Women Against Military Madness (WAMM), a local organization founded in 1982 to protest militarism and injustice. WAMM is focused on ending war and protesting U.S. military involvement overseas.

Through partnerships with other local and international groups, WAMM has supported movements ranging from the movements for indigenous spearfishing rights in Minnesota to opposing war in Iraq and Afghanistan.

Since it began, WAMM has gained attention for its “creative and often playful” means of protest, according to its website. One year, the organization bought out a store’s entire supply of war toys before Christmas as a protest — only to return all of the toys after the holidays.

In addition to the vigil for Palestine, the group holds similar vigils calling for peace every Tuesday outside the Immigration and Customs Enforcement (ICE) building near Fort Snelling and every Wednesday on the Lake Street bridge.

Although the vigil for Palestine is  on the edge of campus, the women said Macalester students and others not associated with WAMM rarely join. The participants appreciate the honks and cheers of support, but they especially appreciate new faces at the protest.

“We’ll never change the country unless we stop all of this ridiculous military spending and blaming other countries for it,” Olson said.
13
Donate
By Rise Up TimesPublished On: November 23rd, 2019Comments Off on Women Against Military Madness organizes for Palestinian rights