The Minnesota legislature refused to fund Southwest Light Rail Transit. SWLRT is the most expensive public works project ever proposed in our state at a constantly escalating price of $2.2-plus-billion. While the state legislature did not approve SWLRT funding, every other light-rail project has been supported by Democrats and Republicans.

The Metropolitan Council is responsible for building, but not for funding SWLRT (aka Southwest Transitway or Green Line Extension of the light rail). State residents had been sold on the project as a 50-50 state/federal split, but the  Minnesota legislature refused to fund Southwest Light Rail Transit.

SWLRT is the most expensive public works project ever proposed in our state at a constantly escalating price of $2.2 plus billion. While the state legislature did not approve SWLRT funding, every other light-rail project has been supported by Democrats and Republicans.

Currently SWLRT is assessed at $2.2-plus-billion. Hennepin County is now the sole funder. In October 2017, the Hennepin County general sales tax was doubled by a quarter of a cent with an expected return of $65M per year. It will take almost a generation to raise the $1-billion-plus that the state did not approve—a regressive tax weighing most heavily on the poor.

If $929-million in federal money comes through Hennepin County will be left with 60-percent of the project whose price tag is fluid but rising. For example, in June the Federal Transit Authority required the county to add-on a ten-percent, $200.3-million “cushion” to cover any funding short fall, like cost overruns.

Federal matching funds are capped at $929-million regardless of the project price tag however, the formerly assumed federal money is no longer a slam-dunk under the Trump administration. Nevertheless, Met Council is surging ahead without reconsidering the viability of this very controversial project and only Hennepin County is now taxed with funding the entire SWLRT costs.

The deciders, the 16-member, 7-county Twin Cities regional Metropolitan Council has the power to supersede decisions and actions of local governments whose members are elected. The Council is a governor-appointed body whose mission is to foster economic “growth.”

Met Council authority now incorporates what used to be called the Hennepin County Regional Rail Authority. Are you seeing the usurping powers of the deciders vs. the taxpayers?

Pro-development SWLRT proponents argue that SWLRT is part of a system. In reality it will be a drag on the system because it is not scoped to carry sufficient paying customers and subsidy demands will never stop. Hennepin County taxpayers, most of whom do not live on the route that skirts city neighborhoods, will pay for everything including $30-million in maintenance, capital replacement and improvement costs, per year, in perpetuity.

Built-it-&-the-money-will-come when Democrats are back in federal power is the theory. Of course the sales tax-payers who get nickeled-and-dimed will not be federally reimbursed.

Urban residents may pay more than money. Gun violence is increasingly being committed across city boundaries due in part to the recently opened Green Line light rail connecting Minneapolis and St. Paul according to a Star Tribune story on organized crime. Other crime reports point to daytime suburban home break-ins near light rail stations.

SWLRT is a 35-year-old pro-sprawl plan designed during the G.W. Bush administration that lacked support from both Democrats and Republicans. In fact the political power struggle over SWLRT has been going on so long that current demographics indicate a reverse migration from the suburbs back to urban life. But how did this vanity plan survive? Same answer as Pres. Trump’s “wall.”

For an example of the kind of old-boy-ism that has pervaded the SWLRT process see this article about the Minnehaha Creek Watershed District (appointed) Board’s development plans. Here is the state law on conflict of interest.[1]

The Minneapolis Park and Recreation Board, a non-partisan body, has consistently opposed the project because of its intrusion into the city’s famous Chain of Lakes. The route is scoped through urban forest, parkland and an ancient Mississippi River channel while avoiding densely populated areas.

The late longtime Democratic Congressman Martin Sabo called the SWLRT plan “despicable” in a 6/19/14 news conference because it was being promoted as an “equity plan.” The route of the SWLRT never included the predominately African American Northside or the white Uptown populations but rather non-populated parkland for fast entrance into and exit out of the city with few stops.

A submerged rail tunnel is planned between Cedar Lake and Lake of the Isles, at the top of the Chain of Lakes, requiring an estimated 24,000 gallons per day groundwater removal (formerly considered “dewatering”). 15,000 of that total would be sent off-site to be cleaned and funneled into the Mississippi. The other 9,000 gpd would be injected back into the ground with possible flooding consequences for nearby homeowners. 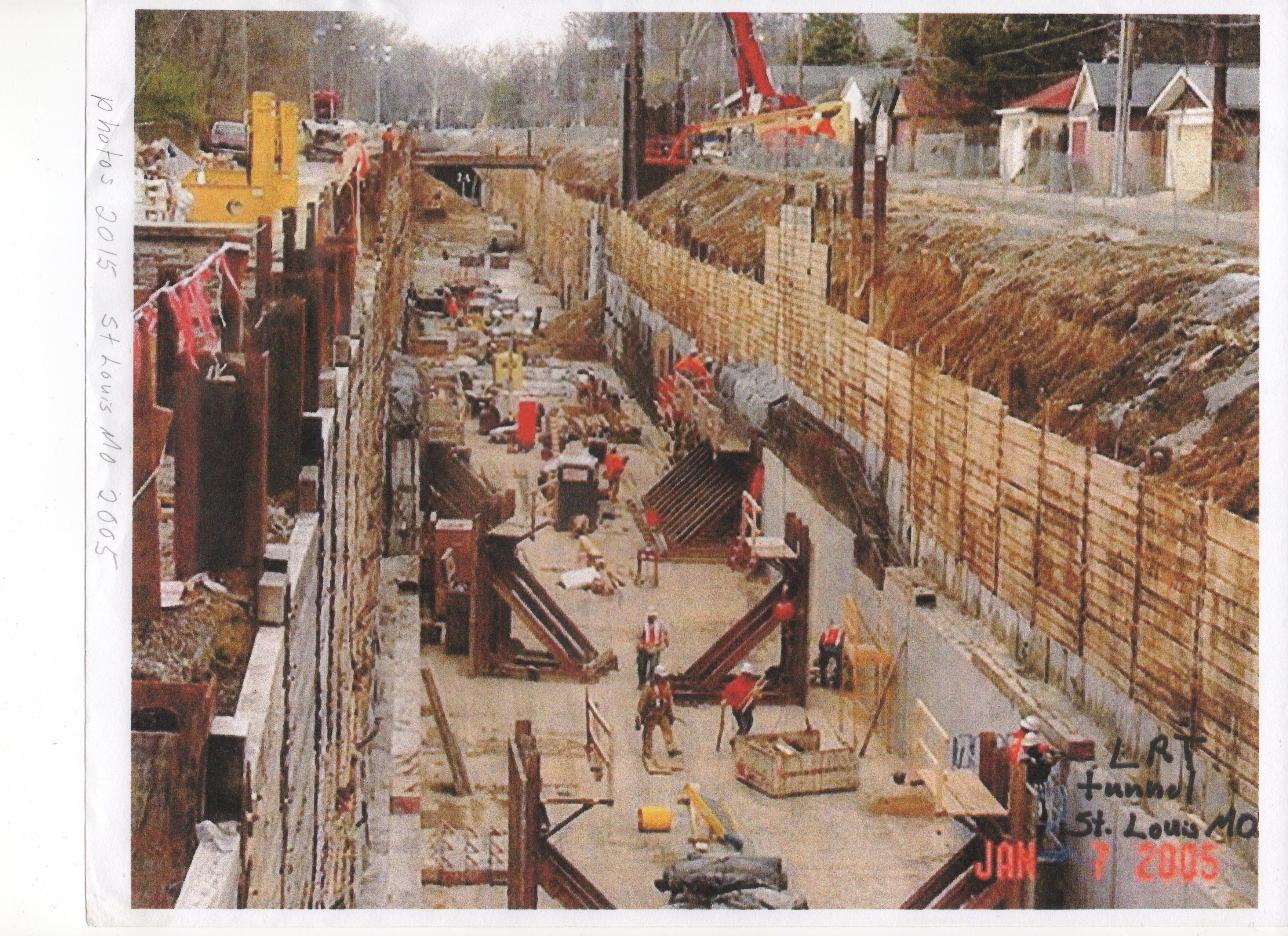 The tunnel image is a construction photo from St. Louis MO, taken Jan. 7, 2005.
The SWLRT tunnel includes solid steel sheets on both sides pounded 55-feet down to anchor the tunnel from fluctuating groundwater levels and restricting groundwater movement.

How long before sucking 24,000 gallons per day out of the source waters of the Chain of Lakes discourages swimming and fishing?  Our lakes are more than scenery.

The issue of financial “externalities” has never cropped up. What are the health effects of clear cutting a 40-acre urban forest where carbon is turned into oxygen? What is the fate of the Chain of Lakes after a half mile tunnel interrupts groundwater recharge? Would seniors in the yet-to-be-built 2040 high rise buildings feel secure frequenting the Bryn Mawr SWLRT station, 30-feet below where Penn Avenue dead ends at I-394?

No parking is provided at Minneapolis transit stations. The Bryn Mawr Station would be accessed along a horizontal pedestrian skyway, thrust across and above freight trains. The enclosed skyway would be 300-feet long, or 100-yards—a football field—at the end of which an elevator or stairway would take riders up or down 22-feet.  With elevator outages riders would have to navigate 42 steps.

In addition to the accessibility challenge, the Bryn Mawr Station would serve as a homeless shelter, prostitution scene, toilet, drug and panhandling site. It would be a set-up for trapping riders in off-peak hours.

Aside from a jobs program what is the public benefit of this multi-billion-dollar expenditure of public money for a 14.5-mile commuter rail at a time of expanding human needs and climate crisis? If SWLRT is such a terrific idea why is it called “transit without the mass?”

For background see the 3/17/17 letter documenting state Republican opposition to SWLRT on environment, cost, route and low ridership projections. The problems with SWLRT have never been resolved and continue to haunt the project.

Years-ago there was an unwritten understanding of no co-location of freight and passenger service in the central city. The agreement legally disappeared because it was never written down. The City of Minneapolis lost to suburban St. Louis Park in the battle between the city and the suburbs. The result is the urban “blast zone” 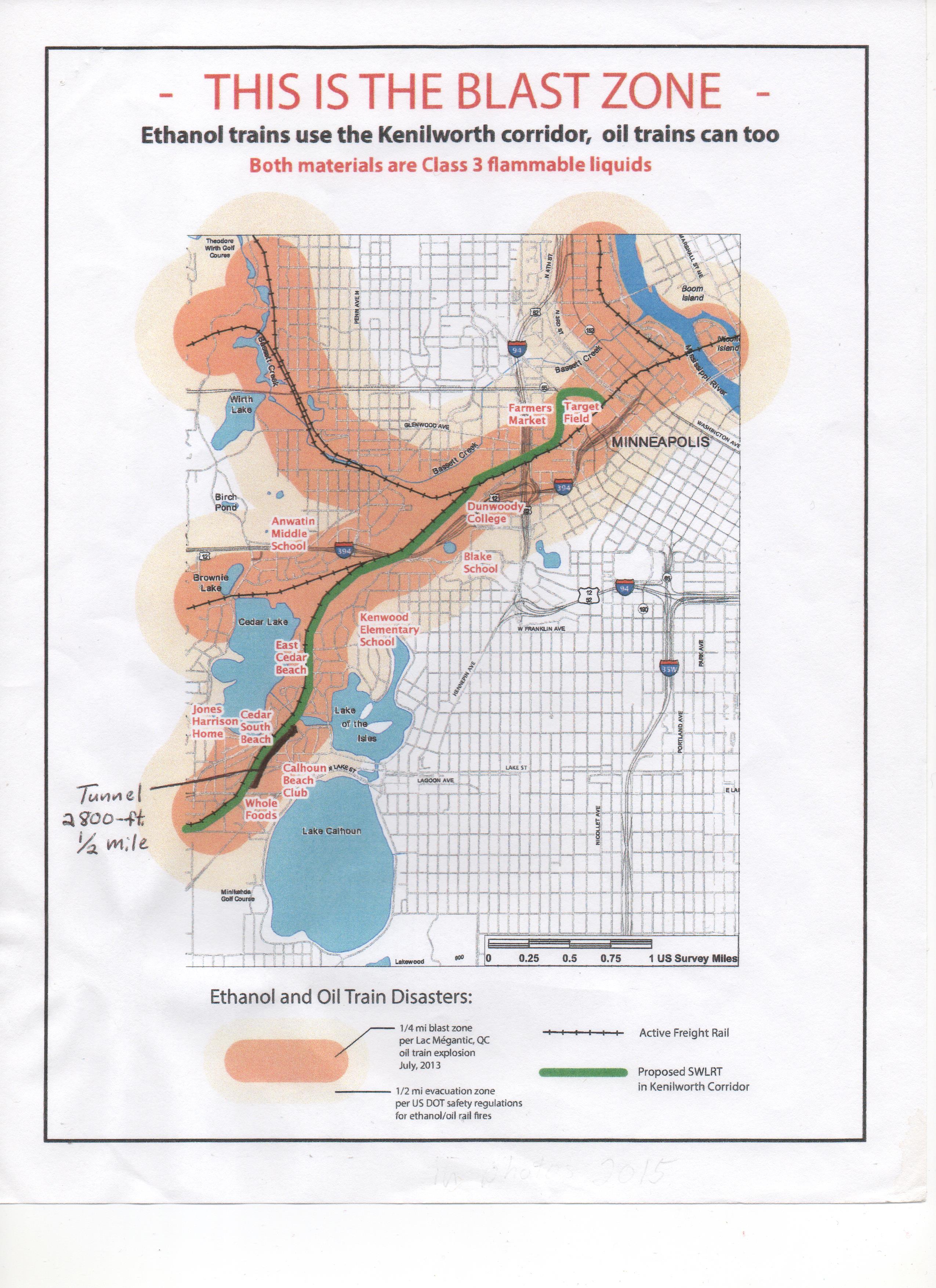 About the 471.87 PUBLIC OFFICERS, INTEREST IN CONTRACT; PENALTY.

Except as authorized in section 123B.195 or 471.88, a public officer who is authorized to take part in any manner in making any sale, lease, or contract in official capacity shall not voluntarily have a personal financial interest in that sale, lease, or contract or personally benefit financially therefrom. Every public officer who violates this provision is guilty of a gross misdemeanor.

Susu Jeffrey is a Minneapolis writer and environmental activist who often writes about and advocates around issues involving water.

Donate
By Rise Up TimesPublished On: August 2nd, 20193 Comments