The Riptide of American Militarism: Lessons from the Natural World on Washington’s Unnatural Wars, by Wm. Astor

Drowning in Militarism. Fulbright … noted a phenomenon then that should ring a distinct bell today. Americans, he wrote, “have grown distressingly used to war.” He then added a line that still couldn’t be more up to date: “Violence is our most important product.” 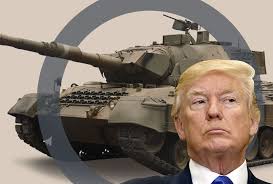 Put up with me for just a moment while I wax literary. It turns out that, if French novelist Marcel Proust lived today, he might have had to retitle his Remembrance of Things Past as Remembrance of Things Present, or even more sadly, Things Future. As an ex-military man who lived through part of the Cold War in uniform, let me make my point, in terms of the Pentagon and an ever-growing atmosphere of American militarism, this way: I love used bookstores. I’ve been browsing in them since my teens. I was, then, an early fan of Stephen King, the famed horror-story writer. Admittedly, today I’m more likely to browse the history section, which has horrors enough for us all, many of which eclipse even the most fevered imaginings of King, though Pennywise the Clown in It still gives me the creeps.

A while back, speaking of things not past, I stumbled across Senator J. William Fulbright’s1970 book The Pentagon Propaganda Machine and, out of curiosity, bought it for the princely sum of five dollars. Now, talk about creepy. Fulbright, who left the Senate in 1974 and died in 1995, noted a phenomenon then that should ring a distinct bell today. Americans, he wrote, “have grown distressingly used to war.” He then added a line that still couldn’t be more up to date: “Violence is our most important product.” Congress, he complained (and this, too, should ring a distinct bell in 2019), was shoveling money at the Pentagon “with virtually no questions asked,” while costly weapons systems were seen mainly “as a means of prosperity,” especially for the weapons makers of the military-industrial complex. “Militarism has been creeping up on us,” he warned, and the American public, conditioned by endless crises and warnings of war, had grown numb, leaving “few, other than the young, [to] protest against what is happening.”

Back then, of course, the bogeyman that kept the process going was Communism. America’s exaggerated fear of Communism then (and terrorism now) strengthened militarism at home in a myriad of ways while, as Fulbright put it, “undermining democratic procedure and values.” And doesn’t that ring a few bells, too? Complicit in all this was the Pentagon’s own propaganda machine, which worked hard “to persuade the American people that the military is good for you.”