According to the report, “the use of live ammunition cannot be justified by automatically deeming every Palestinian who attempts to breach the fences to be an imminent threat to life, and in fact, Israeli forces also shot medics, journalists, children and others who were hundreds of meters away from the fences.”

Every year Palestinians commemorate Nakba (the Catastrophe), the day in 1948 that 700,000 Palestinians were forced from their homes, a result of the creation of the state of Israel. On May 14, 2018, a day before the 70th anniversary of Nakba, thousands of residents of Gaza appeared at the militarized border with Israel, in defiance of their confinement to “the largest open-air prison in the world.” Israeli Defense Force snipers opened fire. It was the bloodiest day yet in many bloody days at the border. Sixty Gazans were killed and 2,700 were injured.

The same day, there was a celebration of Donald Trump’s decision to move the U.S. Embassy from Tel Aviv to Jerusalem. U.S. ambassador to Israel David Friedman praised Donald Trump’s “vision, courage, and moral clarity” for moving the embassy. Prime Minister Benjamin Netanyahu declared May 14th a “great day for peace.” Trump sent a message to Israel that the U.S. will always be “a partner in the cause of freedom and peace.”

For Palestinians, May 14, the declaration of Jerusalem as the capital of Israel, was another reason to protest, in addition to the draconian siege that has kept Gazans imprisoned by land, sea, and air for 11 years. Gazans had been conducting a peaceful protest, the Great March of Return, which began March 30 and lasted six weeks at the border between Israel and Gaza. The Gaza Ministry of Health reported 12,844 Gazan casualties, victims of live fire or tear-gas inhalation. (Update: As of July 7, Gazans continue to be killed and wounded by the IDF.) Human Rights Watch’s response to the carnage was to release a report, “Israel: Apparent War Crimes in Gaza,” which recommends three actions:

According to the report, “the use of live ammunition cannot be justified by automatically deeming every Palestinian who attempts to breach the fences to be an imminent threat to life, and in fact, Israeli forces also shot medics, journalists, children and others who were hundreds of meters away from the fences.”

The spokesman for the UN High Commissioner for Human Rights, Rupert Colville, echoed the sentiment saying: “The mere fact of approaching a fence is not a lethal, life-threatening act, so that does not warrant military action.” 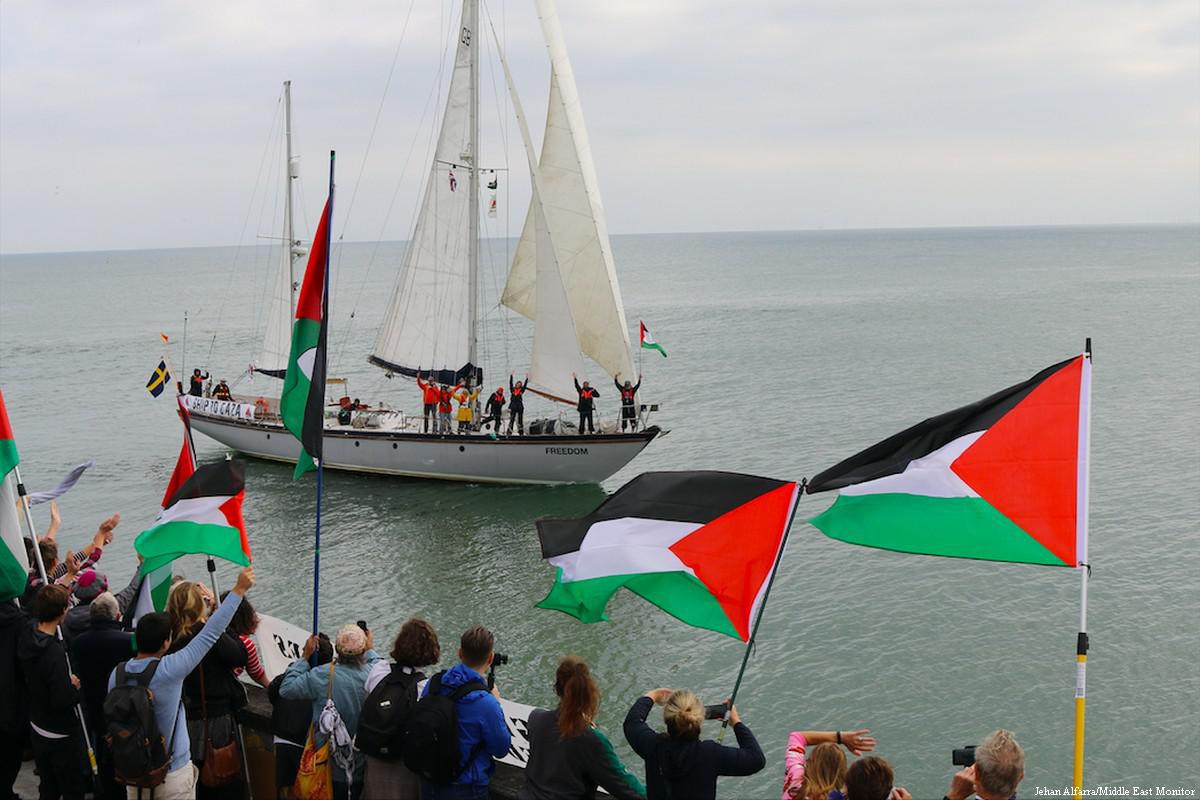 Supporters wave Palestinian flags to a boat sailing under a Swedish flag, part of the 2018 Freedom Flotilla leaving for Gaza in an attempt to break the draconian 11-year blockade.

Last January, the U.S. cut funding to UNRWA (UN Relief and Works Agency for Palestine) for emergency food aid for a million Palestinians in Gaza and schools in Gaza and the West Bank. Funding was also cut for the Palestinian Authority to provide basic needs for the wives and children of resisters of the occupation who were killed or are in prison. But Israel is the largest recipient of U.S. aid. On March 24, as part of its Omnibus Appropriations bill for fiscal year 2018, Congress increased its aid to Israel, giving $3.1 billion for U.S. Security assistance which includes $705.8 million for missile defense and $47.5 million for anti-tunneling technologies. The U.S. has pledged $3.8 billion per year to Israel for the next 10 years. The U.S. has installed a permanent military base in Israel with U.S. military personnel and missile technology.

Polly Mann is a founder of Women Against Military Madness and a contributor to the WAMM newsletter.

Donate
By Rise Up TimesPublished On: September 11th, 2018Comments Off on Polly Mann: Who is Biased?