America’s political history has been written in the fierce narrative of war. Not our country’s many military clashes with foreign nations, but our own unending war for democracy in the United States. Editor’s Note: The  corporate war Jim Hightower describes is probably not news to most Rise Up Times readers, but Jim Hightower highlights a new wrinkle, the domination of the super tech companies in the world economy. Meanwhile in other recent posts  Nick Turse talks about the excessive military spending around the “War on Terror” and endless war in “U.S. Military is Winning. No, Really, It Is!” and Chris Hedges explains the brutal prison system (prisoners are now on strike nationwide) and the corporations that make billions on the backs of the prisoners in “The Slaves Rebel.” David Korten’s book, When Corporations Rule the World, which first alerted many to corporate domination and globalization, was first published in 1995. Since then, Korten has gone on to write several books about a new economy, new structural ways for financial equality. Rise Up Times has posted many articles by progressive and radical news sources about the mainstream corporate media’s misinformation, the true source of so much misdirected “fake news,” as well as about the censorship of non-corporate progressive and radical news sources by media internet providers such as Facebook, Google, and Yahoo. Finally, Henry A. Giroux speaks to the “brutish level of monopolistic power” in our current situation in an interview by Project Censored about his book American Nightmare: Facing the Challenge of Fascism. Our unending war for democracy in the United States is, of course, documented in Howard Zinn’s A People’s History of the United States.

Generation after generation of moneyed elites have persisted in trying to take wealth and power from the workaday majority and concentrate both in their own hands to establish a de facto American aristocracy. Every time, the people have rebelled in organized mass struggles against the monopolists and financial royalists, often literally battling for a little more economic fairness, social justice, and equal opportunity.

And now, the time of a new democratic rebellion is upon us again, for We the People are suddenly in the grip of a brutish level of monopolistic power. 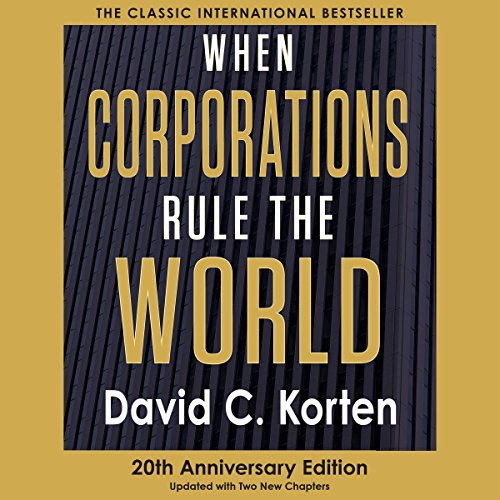 Corporate concentration of markets, profits, workplace decision-making, political influence, and our nation’s total wealth is surpassing that of the infamous era of robber barons. Apple, which just became the first U.S. corporation to reach a stock value of $1 trillion, is now larger than Bank of America, Boeing, Disney, Ford, Volkswagen, and 20 other brand-name giants combined.

The result of fewer and bigger corporations is that those few attain overwhelming power over the rest of us. They are able to control workers’ pay, crush unions, jack up prices, squeeze out smaller businesses, dominate elections, weaken environmental projections, and generally become even fewer, bigger, and more powerful.

They’re waging all out corporate class war on the American people and on our democratic ideals — and they’re winning.

Editor’s P.S.: I reread Chapter 10 of A People’s History of the United States that has to do with a number of significant uprisings in the 1800’s and the formation of unions and also the beginning of the two-party system as we know it. So the corporations are winning now, but what this chapter signifies is that there are many defeats before there are victories, and the people did not give up.

Donate
By Rise Up TimesPublished On: September 5th, 2018Comments Off on Jim Hightower: Corporations Are Waging All-Out Class War