#Unity4J originated from an unplanned but timely response to injustice when Assange’s internet access and visitation rights were taken away. The action has grown into a series of high-profile monthly online vigils. 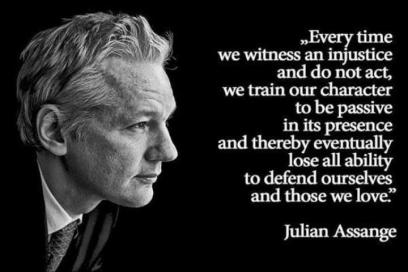 Joe Lauria, editor-in-chief of Consortium News, on Saturday helped moderate a daylong chain of interviews in defense of WikiLeaks and its publisher Julian Assange, including a discussion with Daniel Ellsberg.

A #Unity4J online vigil was held on Saturday to defend the WikiLeaks editor-in-chief, whose sanctuary at the Ecuadorian embassy in London has turned into torturous solitary confinement.

The entire 11 hour and 45 minute event can be viewed here:

International media have reported that Ecuador may hand over Assange to United Kingdom authorities, with a fear that he then would be extradited to the United States. The U.K. and Ecuadorian sides are engaged in ongoing negotiations, but Jennifer Robinson, a lawyer for Assange and WikiLeaks since 2010, has acknowledged that Assange’s legal team is not part of those talks.

The fate of Assange represents a threat to human rights, asylum rights, liberty and press freedoms. The United Nations Working Group on Arbitrary Detention and the Inter-American Court of Human Rights already have found in Assange’s favor.

#Unity4J originated from an unplanned but timely response to injustice when Assange’s internet access and visitation rights were taken away. The action has grown into a series of high-profile monthly online vigils.

A dynamic new format for the monthly online vigils was introduced on Saturday.  Conceived by organizer Suzie Dawson, the concept is described as a “daisy-chain style digital relay”—which featured more than twenty guest appearances of 30 minutes duration each. At the conclusion of each segment, the guests transitioned from interviewee to interviewer.

“Every time we witness an injustice and do not act,” Assange reminds us, “we train our character to be passive in its presence and thereby eventually lose all ability to defend ourselves and those we love.”

For more information about Assange and WikiLeak’s legal situation, visit iamwikileaks.org and justice4assange.com  and unity4J.com .

← Tomgram: Nick Turse, Victory in Our Time (The U.S. Military is Winning. No, Really, It Is!)
Jim Hightower: Corporations Are Waging All-Out Class War →