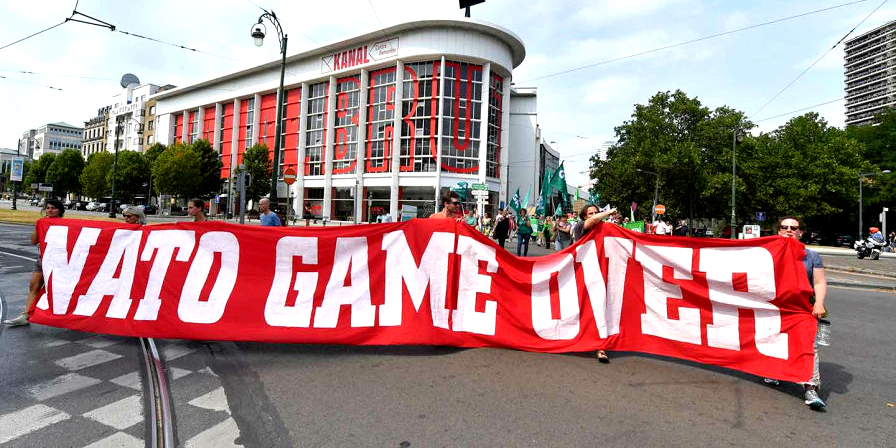 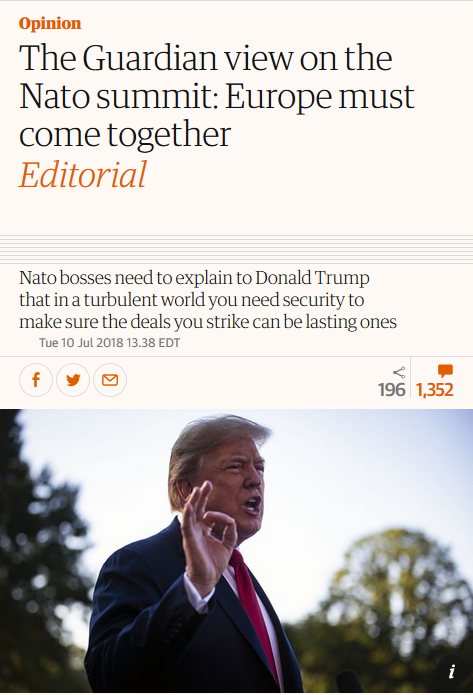 Claims that US President Donald Trump is undermining the North Atlantic Treaty Organization (NATO) by criticizing some of its members and having a cordial meeting with Russian President Vladimir Putin have sent establishment media into a frenzy to sanctify NATO as a force for peace and democracy.

The NATO alliance has helped mold the modern world and ushered in a democratic, liberal world order characterized by open trade and open societies, which after the collapse of the Soviet Union needed only to be lightly defended. This in turn contributed greatly to American peace and prosperity.

Note that “American peace” is a phrase used to describe a state that is currently bombing one country or another every 12 minutes, while US “prosperity” takes the form of spending $716 billion on the war machine annually while 40 million Americans live in poverty, giving the country a child poverty rate of 21 percent as well as the worst child mortality rate among rich nations.

A New York Times editorial (7/8/18) said that since World War II, the alliance has been “the anchor of an American-led and American-financed peace that fostered Western prosperity and prevented new world wars.” According to the paper, NATO has

linked America and Europe not just in a mutual defense pledge but in advancing democratic governance, the rule of law, civil and human rights, and an increasingly open international economy.

The Times argued that, while the alliance’s original purpose was allegedly to respond to a hypothetical Soviet attack, NATO “found a new purpose” after the fall of the USSR, “defending Muslims in the Balkans, and after 9/11, helping the United States fight terrorists in Afghanistan, Iraq, Africa and elsewhere.” 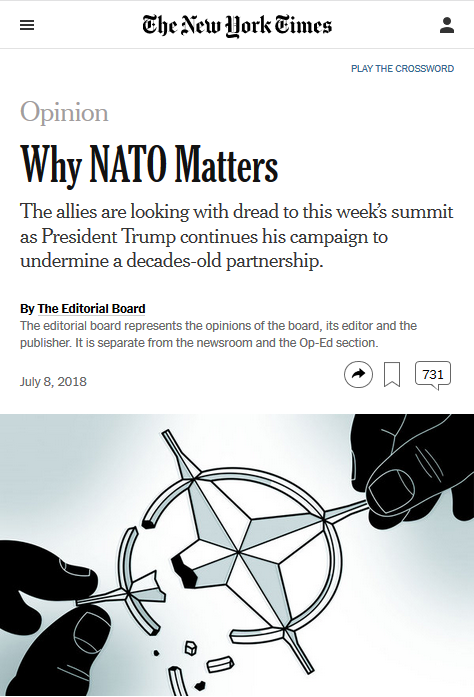 What the Times called “defending Muslims in the Balkans” was actually NATO’s invasion of Yugoslavia, an important tool in the dismantling of that country, which only under the most curious of definitions could be described as an act of “peace” or an exemplar of “the rule of law,” since the attack was illegal. Likewise, in “fight[ing] terrorists in Afghanistan,” NATO has hardly shown itself to be an agent of “peace” in a war that’s gone on for almost 17 years, during which NATO members have demonstrated their regard for “civil and human rights” by killing thousands of Afghan civilians and supporting torturers.While NATO’s occupation has yet to usher in an “open societ[y]” or democracy in Afghanistan, the alliance’s presence has coincided with the birth of ISIS in the country. Rather than embodying “peace” or “human rights,” the 2003 invasion and subsequent occupation of Iraq, which NATO took part in by way of a “training mission,” entailedtorture, the killing hundreds of thousands of civilians, the use of chemical weapons, and rates of infant mortality, cancer and leukemia higher than those reported in Hiroshima and Nagasaki. Then in the Iraqi theatre of the war ostensibly aimed at ISIS, NATO demonstrated these values and helped “fight terrorists” as part of a coalition that killed thousands of civilians.

The Times’ vague reference to “fight[ing] terrorists in…Africa” notwithstanding, none of the articles discussed above or below mentioned Libya, the site of NATO’s most recent full-scale war. Yet it’s fair to say that the seemingly endless war and social collapse in Libya that have followed NATO’s attack, as well as the “hell” of beheadings, rape, and slave markets that resulted from it, aren’t features of “open societies” characterized by “peace,” “democratic” politics and “the rule of law, civil and human rights.” One struggles, in fact, to come up with a single example where such things were the goal of a NATO intervention, let alone its outcome.

Canonizing NATO involves not only erasing its innumerable crimes but also advocating the bolstering of the organization, which would both increase the threat of war and divert resources from socially necessary goods like healthcare, housing, education, ameliorating poverty and inequality, and addressing the climate crisis. 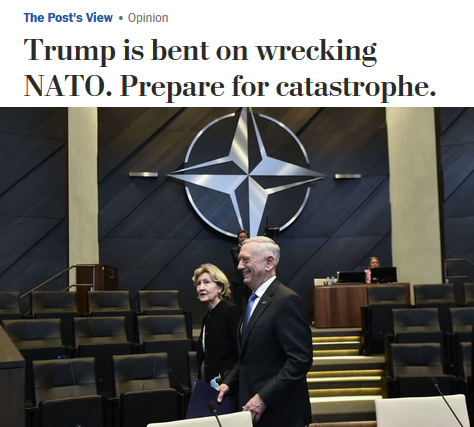 The Washington Post (7/7/18) applauds “the biggest buildup by US allies in 25 years”–despite the fact that NATO is already responsible for more than half the world’s spending on war.

There is considerable good news to celebrate: [NATO] has substantially beefed up defenses of its eastern flank, facing Russia; it is recommitting to vital missions in Afghanistan and Iraq; and every one of its members is increasing defense spending—the biggest buildup by US allies in 25 years. The summit is due to adopt an ambitious new plan that would allow NATO to deploy 30 battalions, 30 squadrons of planes and 30 ships within 30 days—a resource that could considerably bolster the ability of the United States to respond to crises.

The Times editorial claimed that, “faced with” an unspecified “Russian threat”—the existence of which the editorial offers no evidence for, but refers to twice—“a firm and convincing commitment to a strong NATO” is important. Thus the paper implicitly endorsed NATO’s

establishing two new military commands, expanding cyberwarfare and counterterrorism efforts, and approving a new plan to speed the reinforcement of troops and equipment to Poland and the Baltic States to deter Russian aggression.

None of this coverage addressed NATO’s threats to Russia and how these shape Russian actions. Though NATO leaders promised Soviet leader Mikhail Gorbachev in 1990 that NATO would not expand “one inch eastward” toward Russia, the alliance has since grown quite a few inches eastward by adding to its ranks Poland, Hungary, the Czech Republic, Bulgaria, Estonia, Latvia, Lithuania, Romania, Slovakia, Slovenia, Albania, Croatia and Montenegro. 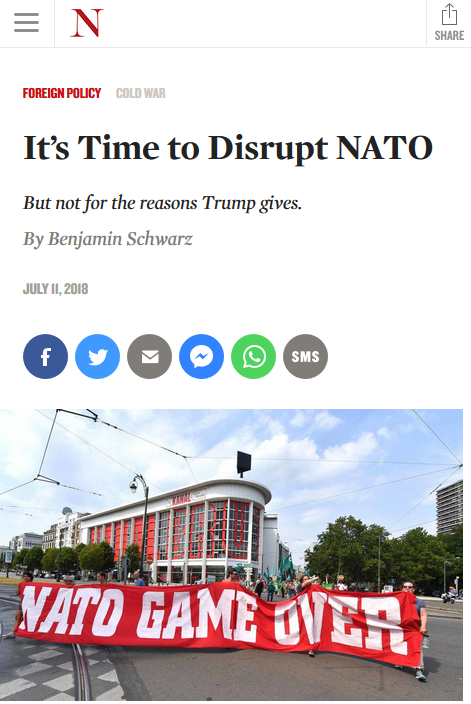 As Benjamin Schwarz pointed out in The Nation (7/11/18), the US has “interfered in the pre- and post-coup political machinations in Ukraine,” and “NATO has signaled that its expansion into Ukraine is a question of when, not if.” He went on to note:

And now that NATO has created an enemy [in Russia], it justifies its [own] intensifying provocative actions—the massive annual military exercises since 2010 in Poland, Lithuania, and, on Russia’s very doorstep, in Latvia and Estonia; the creation of a permanent US Army headquarters in Poland; a new Pentagon-devised plan for a prolonged war with Russia; the US ambassador to NATO’s explicit identification of “Russia and the malign activities of Russia” as NATO’s “major” target—by declaring that they are nothing more than a necessary reaction to Russian hostility and the need, as the New York Times editorial board declared this week, to “contain” the Russian “threat.” And what, according to the Pentagon’s 2018 National Defense Strategy, makes the Russians a threat? Nothing less than that their aim—which is as unproven as it would be understandable—is “to shatter” NATO, the military pact arrayed against them.

Thus, when the Post said NATO’s military buildup “could considerably bolster the ability of the United States to respond to crises,” it should have added that NATO is a driving force in creating these crises in the first place. These media accounts suggest, however, that NATO has an unlimited right to build up its forces near Russian territory, while any Russian response to that is entirely illegitimate.

Therein lies the meta level of the absurdity of this panic about Trump being anti-NATO. By insisting that US allies in the organization pay in more heavily, he’s actually calling for NATO to be built up. In February, the Trump administration released its Nuclear Posture Review, which authorized  developing and deploying so-called “low-yield” nuclear weapons to “deter” Russia in case it’s not already deterred by America’s massive nuclear arsenal.

The problem isn’t, as the media suggests, that Trump is weakening NATO; the problem is that he’s strengthening it.

Donate
By Rise Up TimesPublished On: August 2nd, 2018Comments Off on The Sanctification of NATO