After the snipers began maiming thousands of the demonstrators, including children, medics and journalists, for the impudence of imagining they had a right to liberty, the enclave’s youths reinvented the kite’s role.

First Israel built a sophisticated missile interception system named Iron Dome to neutralise the threat of homemade rockets fired out of Gaza.
Next it created technology that could detect and destroy tunnels Palestinians had cut through the parched earth deep under the fences Israel erected to imprison Gaza on all sides.
Israel’s priority was to keep Gaza locked down with a blockade and its two million inhabitants invisible.
Now Israel is facing a new and apparently even tougher challenge: how to stop Palestinian resistance from Gaza using flaming kites, which have set fire to lands close by in Israel. F-16 fighter jets are equipped to take on many foes but not the humble kite.
These various innovations by Palestinians are widely seen by Israelis as part of the same relentless campaign by Hamas to destroy their country.
But from inside Gaza, things look very different. These initiatives are driven by a mix of recognisably human emotions: a refusal to bow before crushing oppression; a fear of becoming complicit through silence and inaction in being erased and forgotten; and a compelling need to take back control of one’s life.
Palestinians encaged in Gaza, denied entry and exit by Israel via land, sea and air for more than a decade, know that life there is rapidly becoming unsustainable. Most young people are unemployed, much of the infrastructure and housing are irreparably damaged, and polluted water sources are near-unpotable.
After waves of military attacks, Gaza’s children are traumatised with mental scars that may never heal.
This catastrophe was carefully engineered by Israel, which renews and enforces it daily. 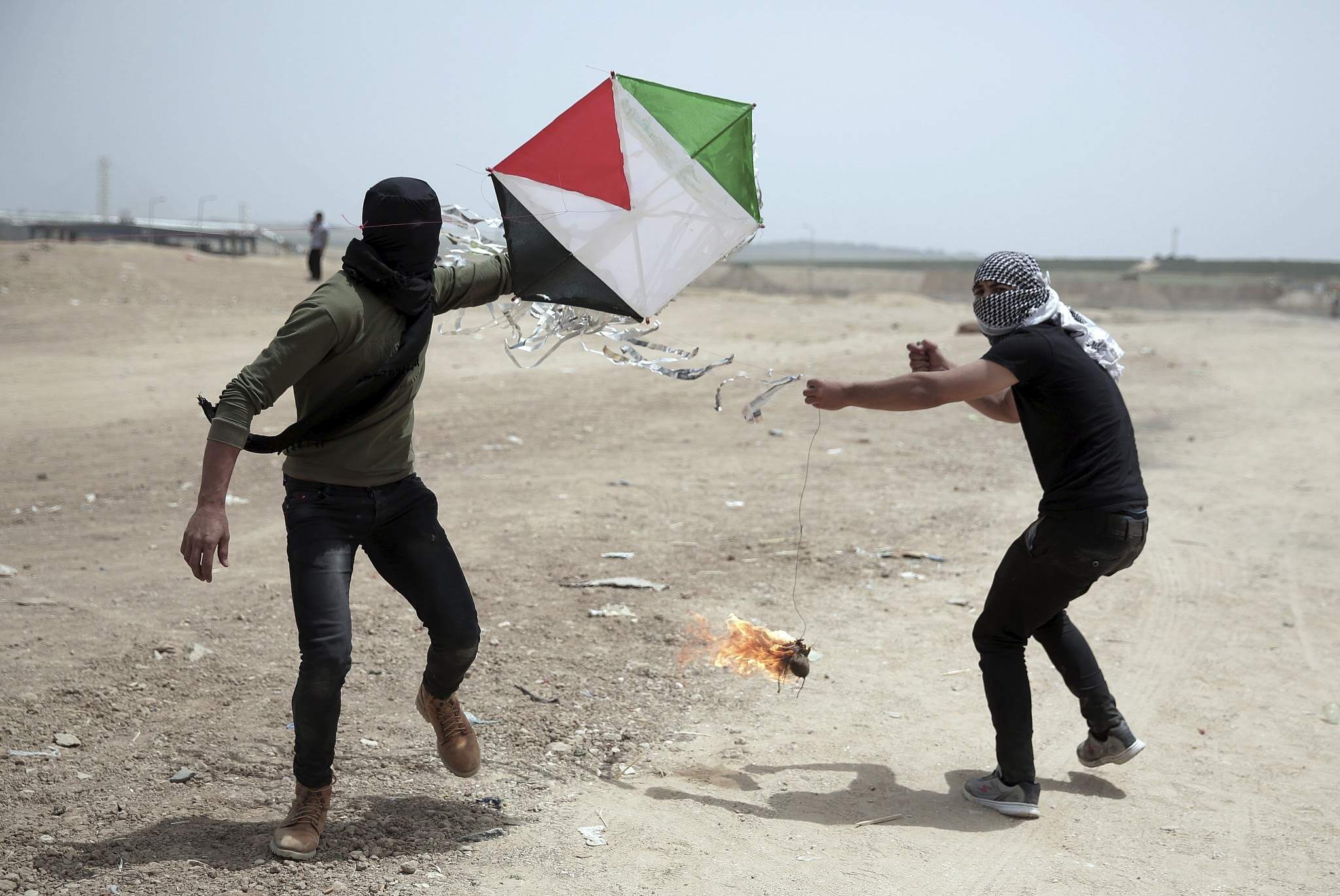 The kites have long served as a potent symbol of freedom in Gaza. Children have flown them from the few spots in the tiny, congested enclave where people can still breathe – from rooftops or on Gaza’s beaches.
Five years ago, the film Flying Paper documented the successful efforts of Gaza’s children to set a new world record for mass kite-flying. The children defied Israel’s blockade, which prevents entry of most goods, by making kites from sticks, newspapers and scraps of plastic.
The children’s ambition was – if only briefly – to retake Gaza’s skies, which Israel dominates with its unseen, death-dealing drones that buzz interminably overhead and with missiles that can flatten a building in seconds.
A young girl observed of the kite’s lure:

“When we fly the kite, we know that freedom exists.”

A message scrawled on one read:

“I have the right to pride, education, justice, equality and life.”

But the world record attempt was not only about the children’s dreams and their defiance. It was intended to highlight Gaza’s confinement and to issue a reminder that Palestinians too are human.
That same generation of children have grown into the youths being picked off weekly by Israeli snipers at unarmed protests at the perimeter fence – the most visible feature of Israel’s infrastructure of imprisonment.
A few have taken up kite-flying again. If they have refused to put away childish things, this time they have discarded their childish idealism. Their world record did not win them freedom, nor even much notice.
After the snipers began maiming thousands of the demonstrators, including children, medics and journalists, for the impudence of imagining they had a right to liberty, the enclave’s youths reinvented the kite’s role.
If it failed to serve as a reminder of Palestinians’ humanity, it could at least remind Israel and the outside world of their presence, of the cost of leaving two million human beings to rot.
So the kites were set on fire, flaming emissaries that brought a new kind of reckoning for Israel when they landed on the other side of the fence.
Gaza’s inhabitants can still see the lands from which many of them were expelled during the mass dispossession of the Palestinian people in 1948 – under western colonial sponsorship – to create a Jewish state.
Not only were those lands taken from them, but the Jewish farming communities that replaced them now irrigate their crops using water Palestinians are deprived of, including water seized from aquifers under the West Bank.
The kites have rained fire down on this idyll created by Israel at the expense of Gaza’s inhabitants. No one has been hurt but Israel claims extinguishing the fires has already cost some $2 million and 7,000 acres of farmland have been damaged.
Sadly, given the profound sense of entitlement that afflicts many Israelis, a small dent in their material wellbeing has not pricked consciences about the incomparably greater suffering only a few kilometres away in Gaza.
Instead, Israel’s public security minister Gilad Erdan called last week for anyone flying a kite, even young children, to be shot. He and other ministers have argued that another large-scale military assault on Gaza is necessary to create what Erdan has termed “durable deterrence”.
That moment seems to be moving inexorably closer. The last few days have seen Israel launch punitive air strikes to stop the kites and Palestinian factions retaliate by firing significant numbers of rockets out of Gaza for the first time in years.
The Trump administration is no longer pretending to mediate. It has publicly thrown in its hand with Israel. It withdrew last week from the United Nations Human Rights Council, accusing it of being a “cesspool of political bias” after the council criticised Israel for executing Gaza’s unarmed demonstrators.
On a visit to the region last week, Jared Kushner, Donald Trump’s son-in-law and adviser, urged ordinary Palestinians to rebel against their leaders’ refusal to accept a long-awaited US peace plan that all evidence suggests will further undermine Palestinian hopes of a viable state.
Kushner is apparently unaware that the Palestinian public is expressing its will, for liberation, by protesting at the Gaza fence – and risking execution by Israel for doing so.
Meanwhile, Prince William is due in Israel on Monday, the first British royal to make an official visit since the mandate ended 70 years ago. While Kensington Palace has stressed that the trip is non-political, William will meet both Israeli Prime Minister Benjamin Netanyahu and Palestinian leader Mahmoud Abbas in an itinerary that has already been claimed by both sides as a victory.
From the vantage point of the Mount of Olives, from which he will view Jerusalem’s Old City, the prince may not quite manage to see the kite battles in Gaza’s skies that underscore who is Goliath and who is David. But he should see enough in the West Bank and occupied East Jerusalem to understand that western leaders have decisively chosen the side of Goliath.
A version of this article first appeared in the National, Abu Dhabi.
Jonathan Cook won the Martha Gellhorn Special Prize for Journalism. His books include “Israel and the Clash of Civilisations: Iraq, Iran and the Plan to Remake the Middle East” (Pluto Press) and “Disappearing Palestine: Israel’s Experiments in Human Despair” (Zed Books). His website is www.jonathan-cook.net.

Truth in media is a powerful instrument.
Global Research is a small team that believes in the power of information and analysis to bring about far-reaching societal change including a world without war.
Disclaimer: The contents of this article are of sole responsibility of the author(s). The Centre for Research on Globalization will not be responsible for any inaccurate or incorrect statement in this article.
Copyright © Jonathan Cook, Global Research, 2018

Like many other independent news and media sites, Rise Up Times has noticed a decline in the number of people looking at articles due to censorship by Google and Facebook. Independent journalism has become the last bastion in seeking and telling the truth as government and corporate lies are promoted by the mainstream corporate media. In the name of democratic rights for all please support us now and share articles widely. The people, Yes!
Sue Ann Martinson, Editor, Rise Up Times

Donate
By Rise Up TimesPublished On: June 29th, 2018Comments Off on The Defiance That Launched Gaza’s Flaming Kites Cannot Be Extinguished, by Jonathan Cook