See Which Companies Make Billions from Selling Weapons Around the World

In 1961, President Dwight Eisenhower famously warned Americans about what he called the “military-industrial complex,” a term he used to describe the toxic union between special interests and people in power. Companies can make a lot of money selling weapons to the government, and those companies can in turn fund candidates friendly to their business model. Our new visualization shows how the United States has ignored Eisenhower’s warning. 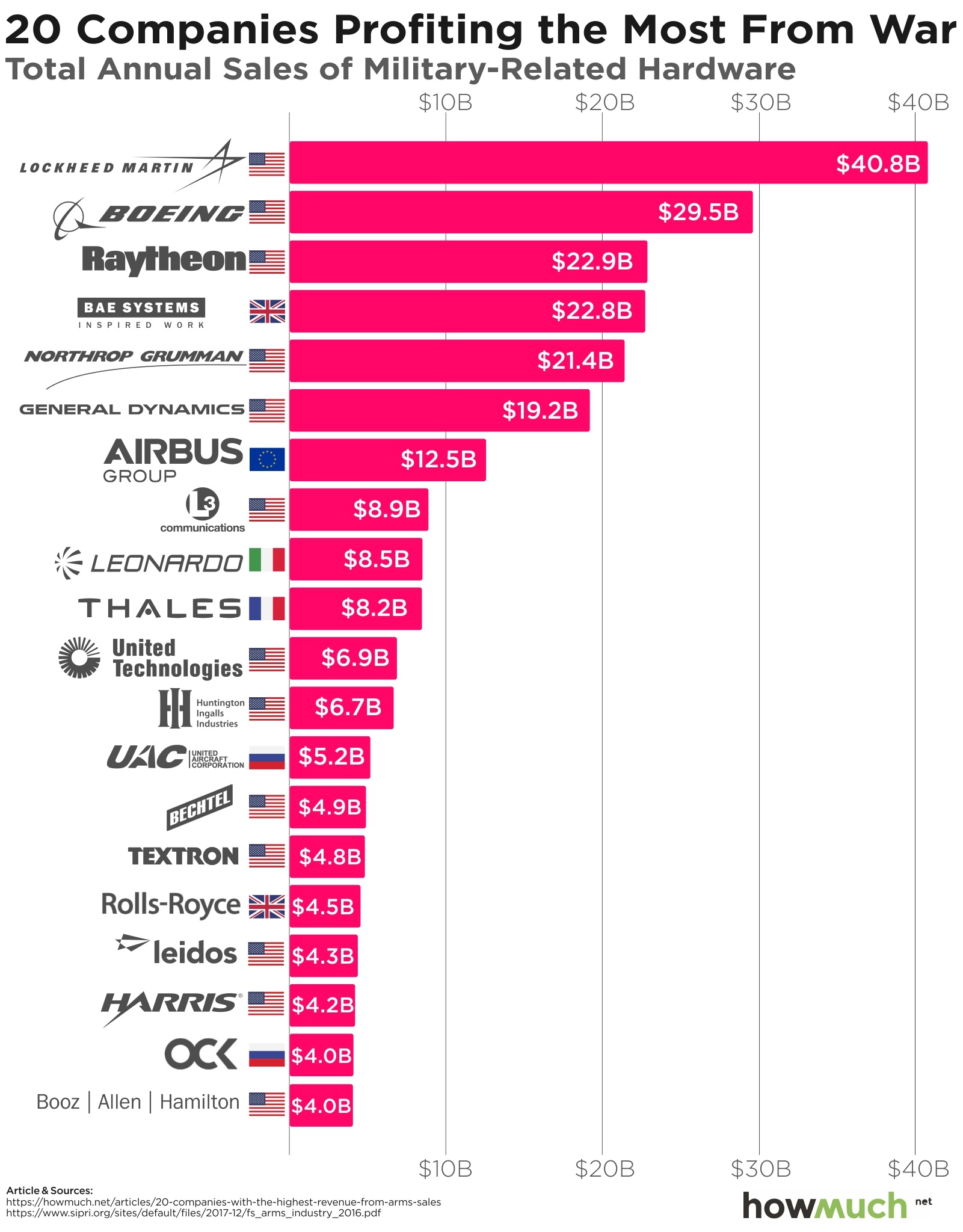 We created our graph from a list of companies compiled by the Stockholm International Peace Research Institute (SIPRI). SIPRI figured out how much revenue each company derives from manufacturing and selling weapons—think military airplanes, tanks, drones, missiles, guns, etc. For each company we provided its logo, along with the flag showing the country where the company is headquartered. Then we made a bar graph showing the annual revenue earned from military sales. You can easily see how making and selling weapons is big business.

Our graph quickly reveals two key aspects of the military-industrial complex. First off, making military airplanes and equipment is a multi-billion-dollar industry dominated by a handful of players. Lockheed Martin jumps out as the biggest contributor, topping $40.8B in annual sales. That represents just over 86% of the company’s total annual revenue. Boeing also stands out as another household name that most people might not expect to find atop this list—they generate $29.5B in annual weapon sales. Unlike Lockheed, however, this sector only accounts for 31% of the company’s total yearly revenue. Airbus ($12.5B) also deserves special mention as the highest-ranked company from a non-English-speaking country (France).

The other interesting trend in our visualization is how American companies dominate the industry. 13 out of these top 20 companies are headquartered in the U.S., collectively generating $178.5B in yearly sales of military equipment. An additional 2 companies are from the U.K., meaning that 80% of the top 20 companies come from the English-speaking world. Another important takeaway is that every company on the list comes from the Western, developed world. Ultimately, that means any active war zone around the globe has been almost undoubtedly made possible by Western companies.

What is the big takeaway from our visualization? The countries included in our visual have foreign policies committed to international institutions, the rule of law, and peacemaking efforts (except perhaps Russia). Large segments of the economies of developed nations (especially in the U.S.) depend on manufacturing and selling weapons and other military-related manufactured goods. Does that mean the stated American foreign policy goals of encouraging global efforts toward peace are inherently at odds with the country’s own domestic political and economic interests? Private companies building and selling guns is not the same thing as the government encouraging their use in other nations’ war zones, but President Eisenhower’s prescient warning is great food for thought.

Like many other independent news and media sites, Rise Up Times has noticed a decline in the number of people looking at articles due to censorship by Google and Facebook. Independent journalism has become the last bastion in seeking and telling the truth as government and corporate lies are promoted by the mainstream corporate media. Please support us now and share articles widely  if you believe in democracy of the people, by the people, and for the people. The people, Yes!