Calling out hard-left group Antifa’s extremist ideology and aggressive tactics, Noam Chomsky noted: “When confrontation shifts to the arena of violence, it’s the toughest and most brutal who win — and we know who that is.” Is Antifa handing the fascists the pretext they’ve been looking for? MINNEAPOLIS – On August 12th, New York Times writer Sheryl Gay Stolberg found herself heavily berated on social media for her reporting on the recent violence in Charlottesville, Virginia. Stolberg, however, had done nothing to buoy the case for the white nationalist or racist elements in motion that day. Her “crime” was instead to suggest that “the hard left seemed as hate-filled as the alt-right” during demonstrations that claimed one life and injured dozens more.
While Stolberg may have been maligned for casting a critical eye on the “hard left,” particularly the controversial group “Antifa,” she is now in good company, as legendary progressive and noted academic Noam Chomsky has also raised concerns regarding the tactics of Antifa and similar groups.
In an interview with the Washington Examiner published last Thursday, Chomsky called Antifa a “minuscule fringe of the Left,” adding that “what they do is often wrong in principle – like blocking talks – and [the movement] is generally self-destructive.” He continued: “When confrontation shifts to the arena of violence, it’s the toughest and most brutal who win – and we know who that is. That’s quite apart from the opportunity costs – the loss of the opportunity for education, organizing and serious and constructive activism.”
Essentially, Chomsky condemned the group, which characterizes itself as “defensive” in nature, for its violent tactics. Most notably, however, he opined that the group is counter-productive to those who aim to support progressive policies and oppose racism — stating that Antifa is a “major gift to the Right, including the militant Right, who are exuberant.”
Beyond Chomsky, very few progressives have spoken out against Antifa. One of the few condemnations in the progressive press comes from writer Nicholas Goroff who argued in a piece for Occupy that the Antifa movement is in many ways antithetical to progressive values.
Goroff writes: “Awash in 20th century Marxist doctrine, the presence of Antifa, and the left’s tolerance of them within their ranks, stands as a rejection of the civil enlightenment values liberals and progressives once stood for, and a slow embrace of the authoritarian orthodoxy which throughout the 20th century so often gave the left its bad name to begin with.”
Other writers, prior to Chomsky’s interview, had suggested that the “militant Right” were well aware that Antifa’s penchant for violence could be twisted to their advantage. As journalist Michael Brendan Dougherty noted in an article for the National Review: “The rally organizers came prepared for violence, and they wanted it. They wanted footage of themselves getting punched and maced so that they could use conservative antipathy to Antifa to erode conservative antipathy to actual Fascists.”
Despite a sympathetic mainstream press, Antifa’s tactics are proving progressives like Chomsky and Goroff correct, as they are revealing themselves to have more in common with authoritarianism than with the progressive values they purport to stand for. Antifa claims to date back to the 1920s and 1930s, tracing their roots to groups of militant leftists who fought fascists on the streets of Europe. Over the years, several low-key groups adopted the name to combat periodic resurgences of Neo-Nazism. However, these groups had little in common with today’s U.S.-based Antifa, whose birth followed in the aftermath of Donald Trump’s election to the presidency last November.
While many of its predecessors were organic movements originating from local communities, Antifa has been identified as sharing links to billionaire philanthropist/activist George Soros. Though some may dismiss such connections between Antifa and Soros as “right-wing conspiracy-mongering,” videos of Antifa protesters in California literally yelling “George Soros, where is my money?” do raise cause for concern about the forces driving Antifa. The video was uploaded by Beverly Hills Antifa, which captioned the video, demanding payment to the tune of $15/hour for their time spent protesting. In addition, some former Antifa organizers have come out and stated that they were promised up to $2,000 per week to organize protests by Soros — money that they never saw. However, more concrete proof of the group’s association to Soros-funded organizations has yet to emerge.

Its indictment of Trump and his supporters – racist and non-racist alike – has won Antifa the support of mainstream media. Journalist John Bosnitch recently told RT that Antifa’s tendency to show up at rallies armed, masked and hooded “falls right in line with the attempt by the mass media and by the stubborn supporters of Hillary Clinton to create a political crisis in America. So I would not be hesitant to guess there is a connection here.”
Indeed, the mainstream media has been largely sympathetic to the group despite their violent tactics. NBC News interviewed sociologist Dana R. Fisher, who stated, “These men and women are basically deciding that there’s a violent alt-right that’s threatening people, and that they should arm and defend the left,” again casting Antifa as a “defensive” organization. CNN recently ran a story “unmasking” the group, claiming that Antifa seeks “peace through violence.” However, CNN later changed the headline, after Antifa activists asserted that the group was “non-violent.” 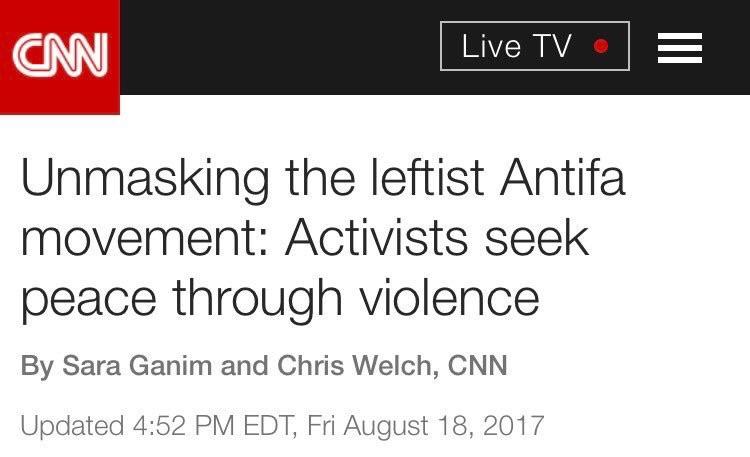 CNN literally scrubbed a headline which called Antifa violent because Antifa did not like it.

This is modern journalism.

Mirroring the violence of their opponents

Antifa believes that preventing the expression of “free speech” — by any means necessary – is “defensive,” as expressing what they deem to be “hate speech” can lead to violence against vulnerable minorities. Yet, certain Antifa members have been caught on video harassing minorities, whom they have labeled “fascists” just for disagreeing with them.
For instance, Boston’s branch of Antifa posted a video claiming to show a “Nazi” harassing and attacking a transgender woman for calling him a fascist. However, the video itself shows that the transgender woman, who is white, does not even allow the so-called “Nazi,” who is an African-American, to speak, screaming “we don’t want to f*ing hear from you” and “we don’t want anything to do with you” and “we’ve got no f*ing use for you.”
There is nothing in this video confirming that the African-American man in the video is a fascist, as he is not allowed to speak. He asks to pass by the march and is told to leave. He refuses to move and is verbally and physically threatened by the Antifa member who initially confronted him and then physically attacks her in retaliation. As can be observed, the tenor of the whole scene is such that it is hard to imagine a group in full possession of its faculties choosing to display to a broader public such self-degrading behavior among any of its members.

Watch an Antifa “activist” harass an African-American for being a “Nazi” for simply walking near their demonstration:

https://youtu.be/dCc-kZluxF0
The same branch of Antifa later posted on their Facebook page a condemnation of a “Free Speech” rally in Boston this past weekend. Though most accounts painted the rally as sparsely attended, Brandon Turbeville of Activist Post – after speaking with attendees and reviewing livestream footage taken at the event – concluded that many of those attending were minorities and people from different sides of the political spectrum. In their post, the group stated: “There is no room for capitalists, conservatives, libertarians, ‘classical liberals’ or supporters of the U.S. constitution in our city. You MUST leave,” followed by the hashtag #BostonResist.
Clearly, not all those subscribing to the aforementioned ideologies are fascists or white supremacists. Instead, it seems Antifa is justifying violence against those who do not agree with its politics by labeling everyone at odds with them as “fascists” and “Nazis.” This incarnation of Antifa, now active in the U.S., is placing itself in the ideological and tactical company of the very people they are ostensibly fighting against: fascist authoritarians.
RELATED

ON VIOLENT AND NONVIOLENT ACTIVISM, THE MEDIA, PHILANDO, AND THE G20  By Sue Ann Martinson  Rise Up Times  July 10, 2017

Donate
By Rise Up TimesPublished On: August 23rd, 20175 Comments