“One consequence [of the election] will be that millions one way or another will once again bear the burden of a society that hates democracy and punishes all but the financial elite.”

Lately the term the “elite” is being used by many media commentators and in numerous articles that appear online and in print. Who are the “elite”? What are their roles in American culture and government? And why should we care?
Perhaps the term should be ruling elite, that is, the current ruling elite. Amy Goodman got it right when she subtitled Democracy Now! The Exception to the Rulers. A ruling elite is a direct contradiction to democracy and could be any group that is in a ruling position who feel superior to the hoi polloi they think are not capable of ruling themselves and who use the position of power for their own gain. Today references to the “elite” generally target a specific group, the financial elite. This group crosses traditional party lines, with Democrats and Republicans equally implicated, and includes a large majority of members of Congress in both dominant political parties.
As Henry Giroux observed before the 2016 presidential election, “One consequence [of the election] will be that millions one way or another will once again bear the burden of a society that hates democracy and punishes all but the financial elite.”
Chris Hedges describes the current domination of the “elites” in his book Empire of Illusion [1] where he echoes many of the themes of Christopher Simpson’s book Science of Coercion [2] that were discussed in the article about “Psychological Warfare.”

The elite rarely confront genuine differences of opinion. They are not asked to examine the roles they play in society and the inequities of the structure that sustains them. They are cultural philistines. The sole basis for authority is wealth. [3]

Which are the elite schools? Harvard, Yale, Wellesley and Princeton are at the top of the list. It is worth noting that the Clintons, Obama, and the Bushes are products of elite schools. Donald Trump is not but he was raised in an atmosphere of wealth and attended a military academy that is a feeder for the schools of the elite, which included an incident that resulted in a questionable record.

The Republican elite are obvious, especially now with the Trump presidency and his wealthy cabinet choices. Thomas Frank describes the Democratic elite and their party this way:

The Democratic Party represents a class. It is a class party, and they act on that class’s behalf and they act in that class’s interests and they serve that class. And they have adopted all the tastes and manners and ideology… It’s just that class is not the working class. It’s not the middle class. It’s the professional class – affluent, white-collar elites. They can’t see what they’re doing. This is invisible to them, because it’s who they are.

To add yet another dimension, the financial elites are battling among themselves for control. The neoliberals are personified by, but certainly not limited to, the Clintons, who are mere millionaires. Trump, with his millionaire and billionaire cabinet and supporters  represents the other faction. Anyone else, namely the people, are fair game, are collateral damage, in this deadly game of psychological warfare that threatens not only democracy, but the planet and humanity.
In addition to the elite in government there are eight people (six are Americans) have more wealth than half the world’s population. Included in the .01 percent of the 1 percent are the CEOs of arms manufacturers such as Boeing and Northrop Grumman, who receive millions of dollars in government contracts for drones and other weaponry, a disproportionate amount going into the hands of the CEOs.
The Elites and Racism 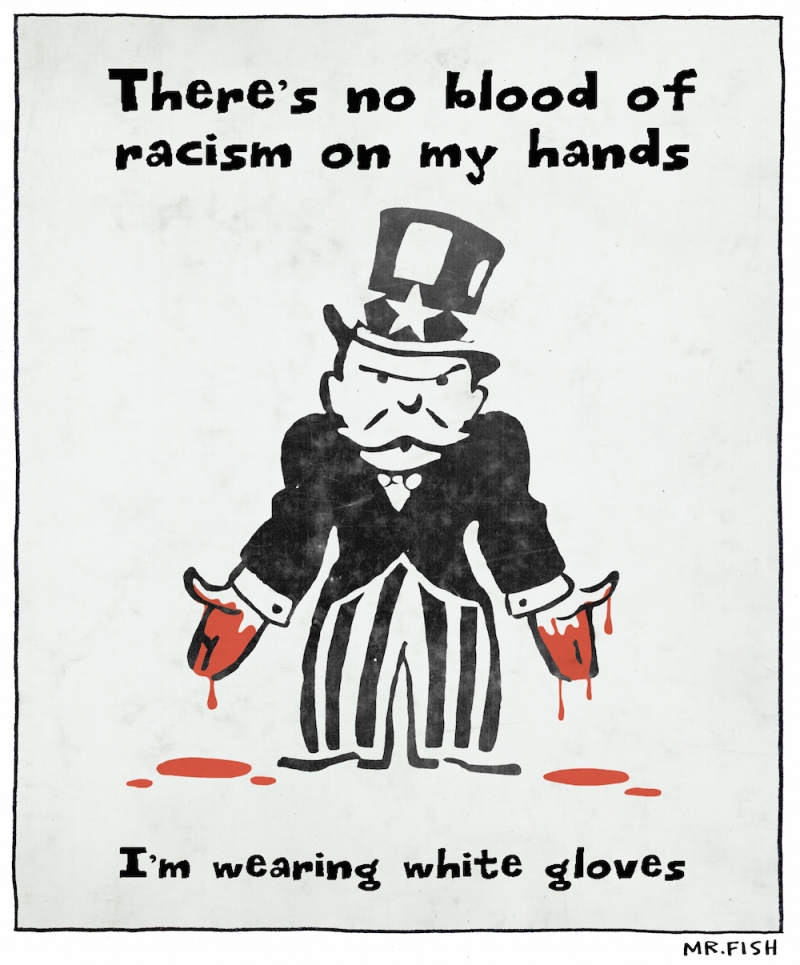 Every time another black person is killed by the police with the concomitant protests that arise, think “control.” Elites need to control the black population because in attempting to assert their Constitutional rights they are a threat to the status quo. They have traditionally been a cheap labor force, as is true of other people of color, especially more recent immigrants such as Somali and Hispanic people.
In Minnesota, mostly in the urban areas of the Twin Cities but increasingly in rural areas as well, we have major representation of these populations with Muslim Palestinians and Somalis, as well as a large Hispanic population and also Vietnamese and Hmong people. In addition, Minnesota has a number of Native American reservations statewide.
These populations are clearly targeted in a violent manner by the police. The militarized police are a symptom of the corruption of the system, a tool of the elite in the science of coercion and the legacy of psychological warfare, the deep state. In training the police are indoctrinated with the attitude that people of color are suspected terrorists, especially all Muslims, regardless of color.

Rampant racism by control of Native American, black and immigrant populations also extends to dissenters, to the working class (for example, Fight for $15), to white people who support people of color and immigrant rights, and to those who are antiwar/propeace, stand against Islamophobia, or protest against environmental destruction. The resistance at Standing Rock in North Dakota by Native American nations and their allies against an insidious pipeline is a recent example: Those who bring attention to climate change must be controlled, because they challenge the capitalistic neoliberal status quo, the corporate elite’s continued use of fossil fuel for financial gain.
When Sheriff Clarke spoke at the Republican National Convention in July of 2016, he said:

There is some good news out of Baltimore, Maryland, as Lieutenant Brian Rice [who murdered Freddie Gray] was acquitted on all charges. … What we witnessed in Ferguson and Baltimore and Baton Rouge was a collapse of the social order. So many of the actions of the Occupy movement and Black Lives Matter transcends peaceful protest and violates the code of conduct we rely on. I call it anarchy.

Clarke’s statement is a somewhat subtle and complex example of psychological warfare. His pronouncement implies that the protesters must be controlled—that they have no rights because they threaten the status quo, which, however, is actually a social order that benefits the elites and oppresses the protesters, particularly people of color. Anarchy serves here as a loaded code word with implications of violence and disorder to invoke fear, as it has long been used in the United States whenever the elite feel threatened. (Anarchy in and of itself is neither violent or nonviolent, and can be either.)  The irony of course, is that Clarke is black. He is not aware that he is a victim of psychological warfare himself. He is so saturated in the culture of cops, that he has betrayed blacks who suffer from a culture of white supremacy.
Fighting for the Soul of Democracy 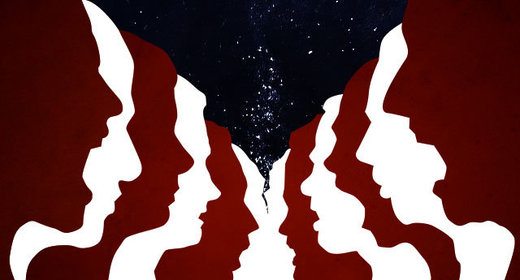 Not only people of color are affected, although certainly they bear a great burden in this new world disorder. In this struggle that Giroux calls the “fight for the soul of democracy” 3.3 million people spoke with their marching bodies across the U.S. and another 250,000 worldwide at the time of Donald Trump’s inauguration demanding a sea change, crystallizing multi-issue rights from such basic needs as heath care and housing and food and water to the local and global need to stop destruction of the planet and the commons−of air, water, and earth−driven by the elite in their greed and endless wars, and their authoritarian need to control with psychological warfare, mass surveillance and suspension of civil liberties. The large marches continue, such as the recent tax day, science and climate change marches and International Workers Day marches on May 1 along with other types of community resistance such as the ACLU’s peoplepower.org, sanctuary cities, and many other groups that have programs, calendars of events, and actions nationally and locally. The ACLU continues to challenge the illegality under the Constitution of many of Trump’s actions.

The Elites and Foreign Policy
Henry Giroux describes the connections between U.S. domestic policies and foreign policy. They are inexorably linked. America has organized itself around a culture of war, led by and ruled by a cadre of the financial elite. “The U.S. government’s warfare state is propelled by a military-industrial complex that cannot spend enough on weapons of death and mass destruction.” [4] Although this was true before, Trump has not only maintained, but expanded military spending.
“Hot wars” are being fought on foreign soil over oil and other natural resources in geopolitical wars presented as religious wars with Islamophobia as the lead fear-mongering propaganda tool of psychological warfare, and NATO as the enforcer for the elite in the Middle East and Europe.

Can you have a democracy that organizes itself around violence and war? Giroux says,

War is no longer simply an instrument to be used by political powers, but a form of rule, a general condition of the social order itself—a permanent social relation and coordinating principle that affects all aspects of society.

Solutions do not lie in giving in to the lure of violence, bigotry and hate, in violence and injustice, of power over rather than power of  the people, in endless war by the financial elite for profit: within the U.S. against so-called dissenters of all colors and backgrounds and in a foreign policy of endless wars of aggression in foreign countries. We have many choices and channels for resistance: unity and solidarity in continued vigilance, action in the streets, in the local and state city councils and legislatures and in Congress, in communities everywhere, organized by reasoned strategizing and focus on issues that people care about and that affect everyday lives that will ultimately determine the lives of generations to come. RESIST!

RELATED
For an in-depth analysis of the elite in the 21st century and how their power structures work, the website WhoRulestheWorld.net, along with the book and video of the same title, is recommended.
Mark Leibovich on Glitz and Greed in Washington, Moyers and Company, August 23, 2013
PSYCHOLOGICAL WARFARE by Sue Ann Martinson, Rise Up Times, December 7, 2016
Power, Politics & Social Change, by G. William Domhoff, Popular Resistance December 8, 2016  Originally published in www2.ucsc.edu
Revolt Is the Only Barrier to a Fascist America, by Chris Hedges, Truthdig,  January 22, 2017
Organizational Structures, by Tony Bouza, Southside Pride, April 2, 2017
WHO RULES AMERICA? A BREAKDOWN OF WEALTH IN THE U.S. HOUSE AND SENATE by Jerry Robinson | FTMDaily   Posted on RiseUpTimes.org  May 3, 2017
Listen Liberal: Whatever Happened to the Party of the People  by Thomas Frank.
THE LEGACY OF PSYCHOLOGICAL WARFARE: THE DEEP STATE  by Sue Ann Martinson, Rise Up Times  February 20, 2017
ENDNOTES
[1]  Chris Hedges, Empire of Illusion: The End of Literacy and the Triumph of Spectacle (New York: Nation Books 2009).
[2]  Christopher Simpson, Science of Coercion: Communication Research and Psychological Warfare, 1945-1960 (New York, Oxford: Oxford University Press 1994). A digital edition with a preface by Christopher Simpson and an introduction by Robert McChesney is available on the web: New York: Open Road Integrated Media, 2014 <http://tiny.cc/l99mfy>. A later edition available in print: Oxford University Press; Reprint edition (March 14, 1996).
[3] Hedges, Empire of Illusion, 100.
[4] Henry A. Giroux, America at War With Itself (San Francisco: City Lights Books 2017) 145.

Donate
By Rise Up TimesPublished On: May 4th, 20172 Comments