Articles about the Trump presidency. Click the title to read the full article. 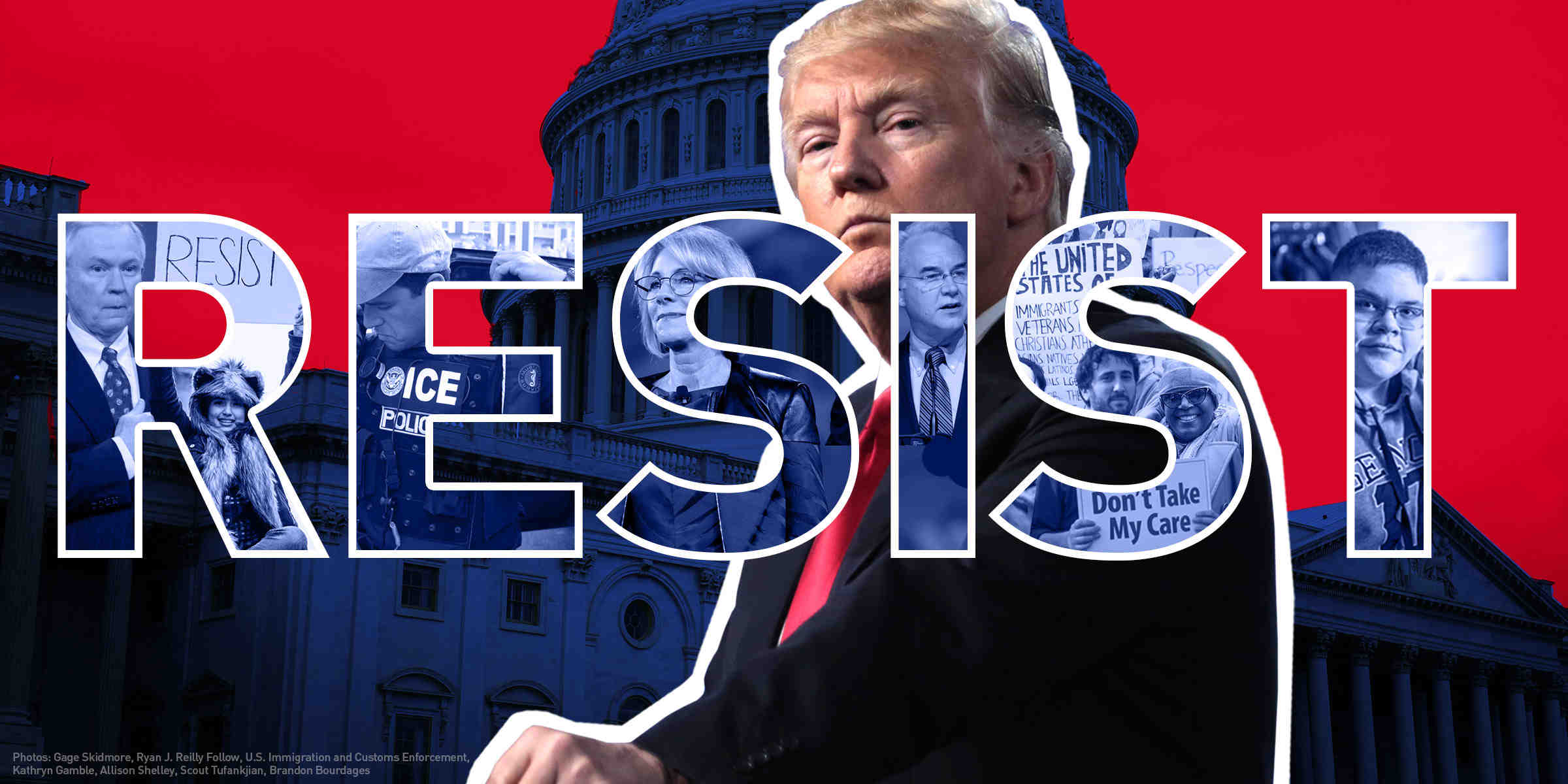 Despite himself, Donald Trump has accomplished something beautiful — he’s awakened American democracy and reminded us that it’s “We the People” who truly govern. 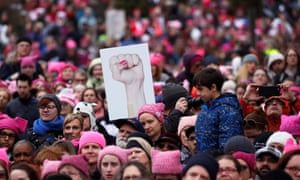 The Women’s March in Washington on 21 January was part of what has been called the single largest day of protest in US political history. Photograph: Shannon Stapleton/Reuters

Saturday is President Trump’s 100th day in office. Adam, the Guardian’s lead reporter on the Resistance Movement, has just published a timeline of activism efforts over this same period, from the airport protests against the proposed travel ban to challenging elected officials at town halls.The Guardian  April 24, 2017

Human Rights Campaign: Thank you for resisting during the first 100 days of the Trump presidency

As a way to thank you and pay homage to the difference you are making as an HRC Partner, we’ve created a short video that shows your support in action over the last 100 days. Take a minute to watch it.

Trump Tax Plan Would Shift Trillions From U.S. Coffers to the Richest 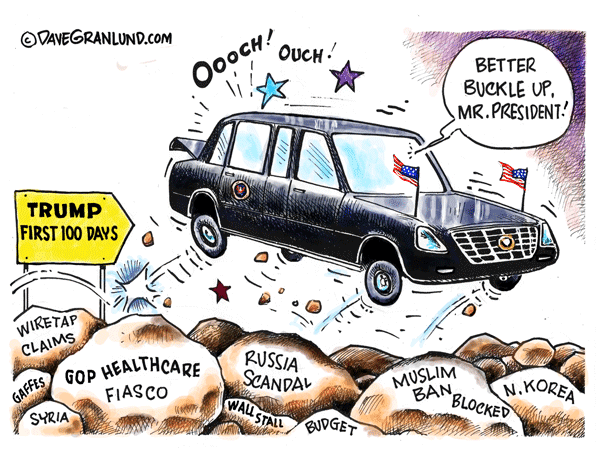 The first hundred days of a new presidency are widely acknowledged to be the most productive of an administration due to the honeymoon period a new president enjoys. Pres. Trump has squandered his first months in office and has little to show for them. Many of his high-profile campaign promises (immigration ban, ACA repeal and a tax reform bill) have been stopped by the courts, fallen apart in the public eye or failed to even be introduced as legislation. In particular, the health care bill’s defeat must be credited to you. The grassroots resistance Donald Trump faces is like no other I have ever seen, keep it up.

100 Days of Media Hoping for a New, Improved Trump

Pundits have begun considering Trump as mostly a problem of manners and refinement to solve. The press helpfully reimagines Trump as he might be, rather than analyzing him for what he really is (and always will be).

Trump ridicules Warren: ‘Pocahontas’ may run for president in 2020

“Buy America, Hire America” is no longer just a campaign bumper-sticker.  It’s now the official policy of the executive branch of our government.

CNN’s Jack Tapper opened Tuesday’s episode of his show The Lead with a scathing rebuttal of the order, asking his audience, “So wait, does that mean he wants me to stop buying Trump products?”

Trump Reverses Himself On 6 Major Issues In 2 Days

From currency manipulation to NATO to Syria, Trump is flexible.

President Donald Trump has reversed himself on at least six major issues this week, pulling back on long-held promises supported by his base.

Four of these reversals alone came in an interview with The Wall Street Journal published Wednesday:

What does the culture of cruelty look like under a neo-fascist regime?

First, language is emptied of any sense of ethics and compassion.

Second, a survival of the fittest discourse provides a breeding ground for racial and social sorting.

Third, references to justice are viewed as treasonous or, as at the present moment, labelled dismissively as “fake news.”

Fourth, the discourse of disposability extends to an increasing number of groups.

Fifth, ignorance becomes militarized, enforced not through an appeal to reason but through the use of the language of humiliation and eventually through the machinery of force.

Sixth, any form of dependency is viewed as a form of weakness, and becomes a referent and eventually a basis for social cleansing. That is, any form of solidarity not based on  market-driven values is subject to derision and potential punishment.

Seventh, the language of borders and walls replaces the discourse of bridges and compassion.

Eighth, violence becomes the most important method for addressing social problems and mediating all relationships, hence, the increasing criminalization of a wide range of behaviours in the United States.

Tenth, the critical media is gradually defamed and eventually outlawed.

Eleventh, all forms of critical education present in theory, method, and institutionally are destroyed.

Twelfth, shared fears replace shared responsibilities and everyone is reduced to the status of a potential terrorist, watched constantly and humiliated through body searches at border crossings.

Thirteenth, all vestiges of the welfare state disappear and millions are subject to fending for themselves.

Fourteenth, massive inequalities in power, wealth, and income will generate a host of Reality TV shows celebrating the financial elite.

Underlying this project is one of the most powerfully oppressive ideologies of neoliberal neo-fascism. That is, the only unit of agency and analysis that matters is the isolated individual. Shared trust and visions of economic equality and political justice give way to individual terrors and self-blame reinforced by the neoliberal notion that people are solely responsible for their political, economic, and social misfortunes. Consequently, a hardening of the culture is buttressed by the force of state sanctioned cultural apparatuses that enshrine privatization in the discourse of self-reliance, unchecked self-interest, untrammeled individualism, and deep distrust of anything remotely called the common good. Freedom of choice becomes code for defining responsibility solely as an individual task, reinforced by a shameful appeal to character.

Liberal critics argue that choice absent the notion of constraints feeds Ayn Rand’s culture of rabid individualism and unchecked greed. What they miss in this neo-fascist moment is that the systemic evil, cruelty, and moral irresponsibility at the heart of neoliberalism makes Ayn Rand’s lunacy look tame. Rand’s world has been surpassed by a ruling class of financial elites that embody not the old style greed of Gordon Gekko in the film Wall Street, but the psychopathic personality of Patrick Bateman in American Psycho.

The notion that saving money by reducing the taxes of the rich justifies eliminating health care for 24 million people is just one example of how this culture of cruelty and hardening of the culture will play out.

Dark Times are truly upon us. There will be an acceleration of acts of violence under the Trump administration and the conditions for eliminating this new stage of state violence will mean not only understanding the roots of neo-fascism in the United States, but also eliminating the economic, political, and cultural forces that produced it.

There is more at work here than getting rid of Trump, there is a need to eliminate a system in which democracy is equated with capitalism, a system driven almost exclusively by financial interests, and beholden to two political parties that are hard wired into neoliberal savagery.

Henry A. Giroux currently holds the McMaster University Chair for Scholarship in the Public Interest in the English and Cultural Studies Department and a Distinguished Visiting Professorship at Ryerson University. His most recent books are America’s Education Deficit and the War on Youth (Monthly Review Press, 2013) and Neoliberalism’s War on Higher Education (Haymarket Press, 2014). His web site is www.henryagiroux.com.

The sweeping executive order — which the president signed with great fanfare in the Environmental Protection Agency’s Map Room — also seeks to lift a moratorium on federal coal leasing and remove the requirement that federal officials consider the impact of climate change when making decisions.

By Juliet Eilperin and Brady Dennis  The Washington Post  March 28, 2017

Trump’s own defense secretary has warned that this blind defense of Israel harms U.S. security.

Noam Chomsky: Trump’s Economic Policies Will Lead to Another Crash

Revesz writes: “Noam Chomsky has warned the Donald Trump-fuelled rally in capital markets is coming to a close and another financial crash is on the horizon.”
READ MORE

More articles on the Trump presidency can be found here or by clicking on the TRUMP PRESIDENCY link at the top of RiseUpTimes.org.

Donate
By Rise Up TimesPublished On: April 29th, 2017Comments Off on Trump's First 100 Days