The idea that elements within the US intelligence community may actually desire a war—or at least limited airstrikes—and thus may have an interest in presenting conflict as inevitable, is never addressed, much less accounted for. 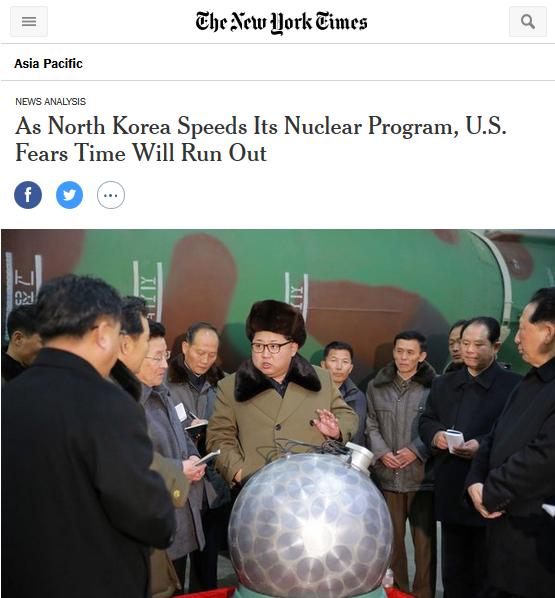 Buoyed by a total of 18 speculative verb forms—five “mays,” eight “woulds” and five “coulds”—New York Times reporters David E. Sanger and William J. Broad (4/24/17) painted a dire picture of a Trump administration forced to react to the growing and impending doom of North Korea nuclear weapons.
“As North Korea Speeds Its Nuclear Program, US Fears Time Will Run Out” opens by breathlessly establishing the stakes and the limited time for the US to “deal with” the North Korean nuclear “crisis”:

Behind the Trump administration’s sudden urgency in dealing with the North Korean nuclear crisis lies a stark calculus: A growing body of expert studies and classified intelligence reports that conclude the country is capable of producing a nuclear bomb every six or seven weeks.
That acceleration in pace—impossible to verify until experts get beyond the limited access to North Korean facilities that ended years ago—explains why President Trump and his aides fear they are running out of time.

The front-page summary was even more harrowing, with the editors asserting there’s “dwindling time” for “US action” to stop North Korea from assembling hundreds of nukes: 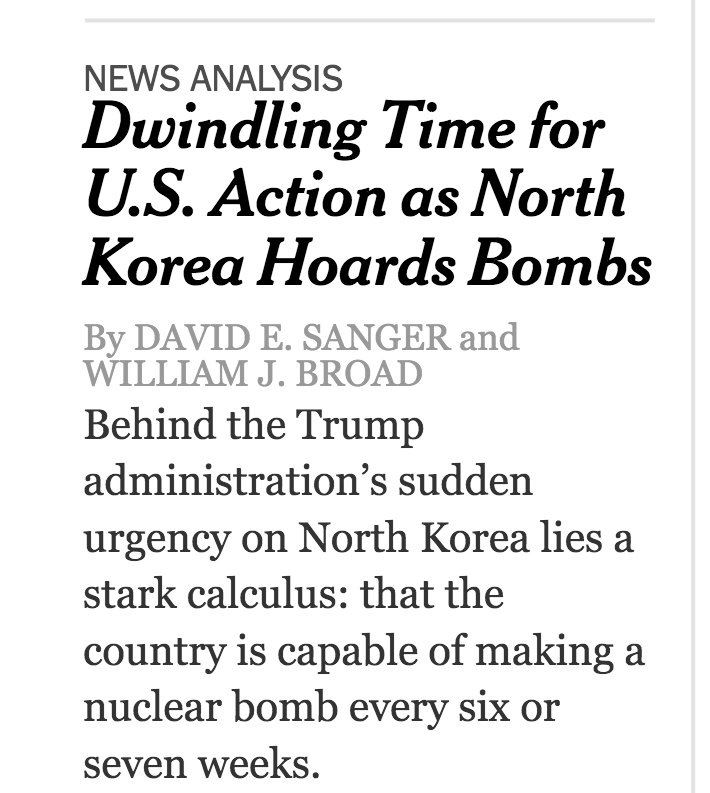 From the beginning, the Times frames any potential bombing by Trump as the product of a “stark calculus” coldly and objectively arrived at by a “growing body of expert[s].” The idea that elements within the US intelligence community may actually desire a war—or at least limited airstrikes—and thus may have an interest in presenting conflict as inevitable, is never addressed, much less accounted for.
The most spectacular claim—that North Korea is, at present, “capable of producing a nuclear bomb every six or seven weeks”—is backed up entirely by an anonymous blob of “expert studies and classified intelligence reports.” To add another red flag, Sanger and Broad qualify it in the very next sentence as a figure that is “impossible to verify.” Which is another way of saying it’s an unverified claim.
When asked on Twitter if he could say who, specifically, in the US government is providing this figure, Broad did not immediately respond.
Other key claims are either not attributed or attributed to anonymous “officials” (emphasis added):

Unless something changes, North Korea’s arsenal may well hit 50 weapons by the end of Mr. Trump’s term, about half the size of Pakistan’s. American officials say the North already knows how to shrink those weapons so they can fit atop one of its short- to medium-range missiles — putting South Korea and Japan, and the thousands of American troops deployed in those two nations, within range.

To offer a bit of outside perspective, Sanger and Broad interview Siegfried S. Hecker, a Stanford professor who directed the Los Alamos weapons laboratory in New Mexico in the late ’80s and early ’90s. The only time he speaks directly to the threat, he does so in the context of a nuclear accident:

At any moment, Dr. Hecker said on a call to reporters organized by the Union of Concerned Scientists, a live weapon could turn into an accidental nuclear detonation or some other catastrophe.
“I happen to believe,” he said, “the crisis is here now.”

Hecker and other semi-neutral observers (Hecker worked for the Department of Defense for several years) are understandably worried about more nuclear weapons in the aggregate, especially in the hands of a relatively poor country with a long history of botched missile attempts. But who, exactly, is making the article’s most alarmist predictions? It’s unclear.
Naturally, the specter of North Korea creating an assembly line of nuclear weapons—by far the sexiest part of the story—was the lead in subsequent write-ups. Within hours, this meme spread to a half-dozen other outlets:

“North Korea’s Growing Nuclear Threat, in One Statistic”
Here is the most frightening thing you’ll read all day: Growing numbers of US intelligence officials believe North Korea can produce a new nuclear bomb every six or seven weeks.
—Vox (4/25/17)

“North Korea Will ‘Cross The Point of No Return’ With Sixth Nuclear Test”
Defense experts estimate that the North is capable of producing a nuclear bomb every six or seven weeks, reports the New York Times.
—Daily Caller, 4/25/17)

“China Warns North Korea Will ‘Cross the Point of No Return’ if It Carries out a Sixth Nuclear Test, as Secretive Country Stages Its ‘Largest Ever Firing Drill’”
…amid fears the secretive state can create a nuke every six weeks.
—Daily Mail (4/25/17)

“North Korea Is Capable of Producing a Nuclear Bomb Every Six or Seven Weeks”
—News.com.au (4/26/17)

Even New York Times columnist Nick Kristof jumped on the meme, magically turning “capable of producing” into “will soon be churning out”:

Excellent on the North Korea challenge, as Kim Jong-un will soon be churning out 1 nuke every 7 weeks https://t.co/jIlZBe2lc6 by @SangerNYT

But from whence did this meme come? Who, exactly, made this claim? Is there any dissent within the community of “experts” on this prediction? Is there an official document somewhere with people’s names on it who can later be held accountable if it turns out to be bogus? Once again, the essential antecedents of war are being established based on anonymous “experts” and “officials,” and hardly anyone notices, much less pushes back.

Adam Johnson is a contributing analyst for FAIR.org. You can find him on Twitter at @AdamJohnsonNYC.
You can send a message to the New York Times at letters@nytimes.com (Twitter:@NYTimes). Please remember that respectful communication is the most effective.
Read the original post here.

Donate
By Rise Up TimesPublished On: April 28th, 2017Comments Off on NYT’s ‘Impossible to Verify’ North Korea Nuke Claim Spreads Unchecked by Media