John Heid on Trial: The conscience of the community is an essential part of a democracy. 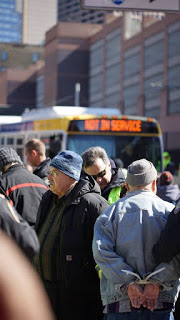 It was a great honor to sit in on at least parts of four of the trials and hear the clear testimony of fellow codefendants describe why they took part. Although much of the trials focused on technical legal minutiae like where exactly were you standing (were you technically on “Metro Transit property”?) instead of the message we were trying to convey, defendants who were eager to take the stand tried to embody the signs we carried: “White Silence Equals Violence” by breaking silence around the police killings of Jamar Clark and other black young men in our metro area. For the past three days, John Heid and Eddie Bloomer were on trial in Hennepin County Courthouse for the arrests at the Black Lives Matter/Twins Home Opener/Catholic Worker Faith and Resistance Retreat action last April. This was the final in a series of five trials, which concluded in two acquittals, dismissal of charges against many of the defendants, the conviction of eight who requested jury trials and the acceptance of a plea agreement for others. (I was in this latter group due to the uncertainty surrounding my dying father’s situation – not wanting to be in the middle of a three-day trial at the time of his passing.)

Yesterday and today, John Heid, going pro-se (representing himself rather than using a lawyer for defense), spoke clearly and passionately. It was difficult to take notes because so much of what he said was noteworthy. Here is the gist of what I wrote down.

Alas, the jurors decided to follow the pleas of the Prosecutor. Both John and Eddie were convicted on all charges.  But lest you think this was a defeat, John Heid smiled his Quaker smile during a break in the trial, saying to me, it doesn’t matter if I get convicted or not as long as we can speak some truth in this courtroom. Thank you, brothers, for lives full of witness and conviction!

Steve Clemens is a peace and justice activist committed to following the way of the nonviolent Jesus of Nazareth. He is a member of the ecumenical Community of St. Martin in Minneapolis and served on the Boards of Pax Christi Twin Cites Area and the Iraqi/American Reconciliation Project, a group helping to support the work of the Muslim Peacemaker Teams in Iraq.

Donate
By Rise Up TimesPublished On: April 4th, 2017Comments Off on Steve Clemens | John Heid in the Courtroom