Hennepin County in Minnesota is featured on the map.

Unlike the simple search of a hashtag or keyword that anyone with access to the internet can perform, social media monitoring products have the capability to read, interpret, and categorize millions of posts in mere minutes, allowing users of the software to stay on top of discussions on social media in real-time as well as search through historical archives of social media posts. Some social media monitoring products claim that they can even interpret the nuances of sarcasm in posts, evaluate the credibility and influence of a message, chart out the relationships between various social media users, recognize and create alerts based on images (including emojis), and pinpoint the movements of individuals. In short, social media monitoring technology provides the capability to constantly monitor and archive information on millions of people’s activities.

Unsurprisingly, law enforcement agencies are increasingly using these tools; according to a 2015 survey by the International Association of Police Chiefs, 96.4% percent of law enforcement agencies surveyed used social media in some capacity, including over half for listening or monitoring and three-quarters for intelligence gathering purposes. News articles indicate that software is used to compile evidence for criminal investigations, shorten emergency response times, alert police to potential threats, detect trends in activity, and analyze sentiment levels in postings.

But the technology can also be used to monitor political and social justice movements, posing risks to First Amendment-protected activity. For example, according to news reports, police departments may have used products from Geofeedia, Media Sonar, and DigitalStakeout to monitor Black Lives Matter activists. During the Freddie Gray protests of 2015, Baltimore police used Geofeedia’s real-time monitoring to run social media photos through facial recognition technology, in order to discover rioters with outstanding warrants and arrest them directly from the crowd of protesters. Investigations have revealed that some companies even marketed their services to law enforcement for monitoring of protestors.

In some cases, public safety agencies have used software that pulls in a wealth of information, including social media data, to assign individuals “threat levels.” Some companies allow law enforcement to create “undercover accounts,” or “targeted friend requests” that law enforcement believes the subject will accept – including “accounts depicting ‘attractive women’” or accounts purporting to be from an actual friend or acquaintance. Police have also made it clear that they know the identity of protestors at times, such as when a police officer called activist Ashley Yates by her twitter handle @brownblaze at a New York protest.

While a few such anecdotes have come to light, very little is known about how, when, and why social media monitoring technology is used by law enforcement. With the exception of information obtained through freedom of information law requests, there is almost no way for the public to determine whether their local police department or sheriff’s office possesses social media monitoring software, much less obtain information on their policies regarding the use of such software.

In an effort to bring greater transparency and attention to this issue, the Brennan Center has created a map that depicts the cities and counties across the United States that have spent at least $10,000* on social media monitoring software, according to public reports, information from the government procurement database SmartProcure, and information from public records requests, particularly via the ACLU of Northern California and the investigative news site MuckRock. The map focuses on purchases of eight social media monitoring products for which data was available: Geofeedia, Media Sonar, Snaptrends (now reportedly closed), Dataminr, DigitalStakeout, PATHAR, Meltwater, and Babel Street. The map also indicates years in which purchases were made.

Three caveats are in order.

Ultimately, this map, with 151 cities, counties, and police departments, provides a conservative estimate of the total number of local jurisdictions that have purchased these products. SmartProcure only obtains information from groups that voluntarily opt-in to its service or that have responded to its purchase requests. As a result, there may be additional municipalities that have purchased the software but did not report their spending to SmartProcure and who have not been the subjects of reporting or public records requests. Moreover, freedom of information law requests and reporting by the media capture what is likely only a small slice of the jurisdictions that are using such software

We plan to keep this map updated as more information becomes available. If you have any information regarding a local government or law enforcement agency’s purchase and utilization of social media monitoring software that is not indicated on the map, please contact andrew.lindsay@nyu.edu. 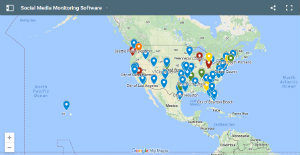 Find your city, county, state. Hennepin County in Minnesota is featured with details of money spent.

Donate
By Rise Up TimesPublished On: November 19th, 20163 Comments