The topics for the final debate, hosted by Fox News’ Chris Wallace, were announced Wednesday, and do not include climate change, abortion, poverty or any of the other issues previously left unmentioned. 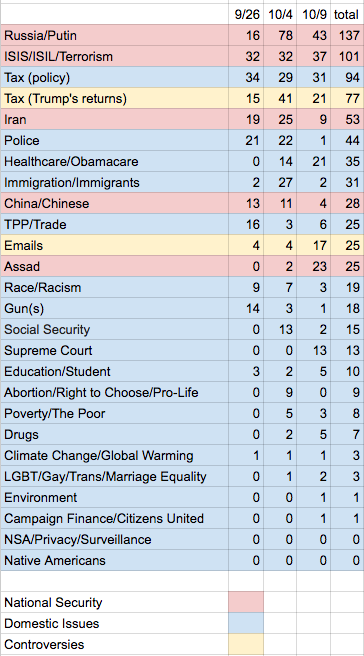 A review of  topics mentioned and questions asked in the first three presidential/vice-presidential debates shows a significant emphasis on Russia, terrorism and taxes—pushing aside most other issues, including climate change, abortion, education, campaign finance and LGBTQ rights.

The total mentions of Russia and Putin—the number of times the words were said by either candidates or moderators—was 137. For ISIS and “terrorism” combined, it was 101. “Taxes” were mentioned 171 times—94 times in the context of tax policy, 77 times in regard to Donald Trump’s unwillingness to release his tax returns.

In contrast, “climate change” (or “global warming”)—widely recognized as the biggest existential threat facing humanity—has only been mentioned three times. All three mentions were by Hillary Clinton, made in passing.

“Poverty” (and “the poor”), “drugs,” “abortion” (with “right to choose” and “pro-life”) and “environment” have each been mentioned less than 10 times. LGBTQ issues (“LGBT,” “gay,” “trans,” “marriage equality”) were brought up in passing three times—once for the sole purpose of criticizing Russia.  “Campaign finance” and/or Citizens United was brought up once by Clinton.

The NSA (along with “privacy” and “surveillance”) and Native Americans have not been mentioned onstage once.

In the first three debates, Russia and Putin have been mentioned more than the TPP, trade, race, guns, Social Security, the Supreme Court, education, student debt, poverty, drugs, abortion, climate change, LGBTQ issues and the environment combined, with 137 vs. 132 mentions. 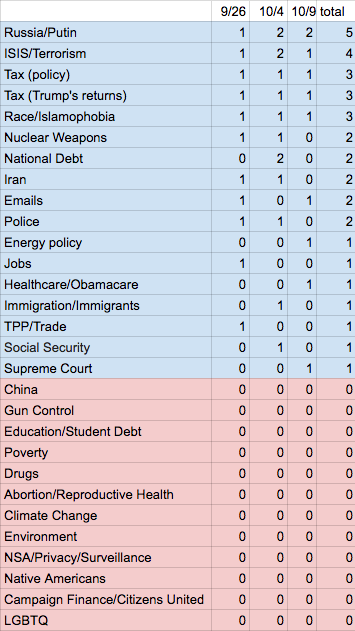 Subjects of Questions in the First Three Presidential/Vice-Presidential Debates

We looked separately at the subjects of debate questions, which speak directly to media priorities. (Note: In the second presidential debate, some questions were nominally asked by audience members, but as these were heavily curated by the moderators, we did not separate them out for the purposes of this analysis.)

Nuclear weapons, police, the national debt, Iran and Clinton’s emails were the subjects of two questions each. Jobs, healthcare, immigration, TPP/trade, Social Security and the Supreme Court were topics asked about once.

No questions in any of the three debates were asked about climate change, the environment, China, gun control or gun rights, education or student debt, poverty, drug policy, abortion, privacy and surveillance, Native Americans, LGBTQ issues or campaign finance reform.

For Democrats, Sunday’s debate marked the 12th consecutive debate without a question about poverty or abortion.

The topics for the final debate, hosted by Fox News’ Chris Wallace, were announced Wednesday, and do not include climate change, abortion, poverty or any of the other issues previously left unmentioned. According to Politico, the topics will be “debt and entitlements,” immigration, the economy, the Supreme Court, “foreign hot spots” and “the candidates’ fitness to be president.” The final debate will be held on October 19 in Las Vegas.