It is difficult. It is hard. Be brave.

The following talk was given at the Women Against Military Madness (WAMM) Walk Against Weapons by WAMM member Pepperwolf on June 4, 2016 on the West Bank in Minneapolis.

Be brave like the bumper sticker quote of Maggie Kuhn’s that says – Speak your mind even if your voice shakes.

It is difficult. It is hard. 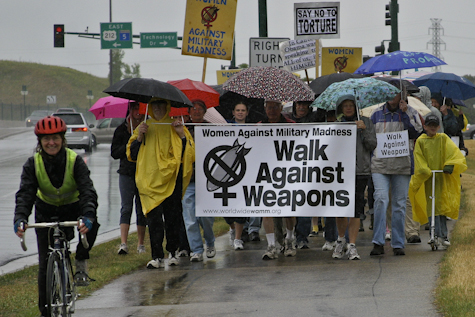 But what if? What if?—like a certain presidential candidate who people like, because that person speaks their mind….What if we would speak our mind? What if, when the opportunity is there, we also speak out?

What if? — Like Muhammad Ali, who died yesterday, we also risked our career or title to align our actions to match our beliefs?

What if? — at your church or school…instead of a wall of photos of those in the military…we propose and put together a different wall, a wall of service of a peace-building kind?

What if? —young
adults didn’t have to join the military because they didn’t see any other options for themselves? Or those needing the camaraderie and community could find it, not with the military or gangs…but within the peace, environmental, religious or community service organizations? 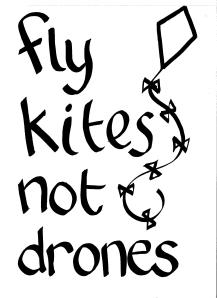 What if—like the student who asked us in our Drones 101 presentation…we didn’t need to choose between “boots on the ground” and a drone strike?

What if we “Fly Kites Not Drones”?

What if? —We told people what we did today at the Walk Against Weapons? Or hit send on that Letter to the Editor? Or when someone talks about the soldiers “fighting for our freedom” we tell them, No, they are not fighting for MY freedom.

We need a nation, a world without weapons. It’s taking our money, resources and our creativity. There are other ways to live, To make money, To honor democracy. To work for justice around the world. Out of the 194 nonviolent actions Gene Sharp has described, surely there are actions that can be used to gain democracy and fight terrorism. Maybe we should mail copies to the War Department.

Last Monday on public television there were TED talks under the umbrella of War and Peace. Two speakers really spoke to me, one Samantha Nutt, a doctor who worked in Somalia described the conditions as so horrific that parents had an easier time obtaining a weapon than clean water and food for their children.

Donate
By Rise Up TimesPublished On: June 6th, 20162 Comments