Probably the biggest surprise in this decision is that some people allowed themselves to be surprised by the US government’s whitewash and rubber stamping of this crime. 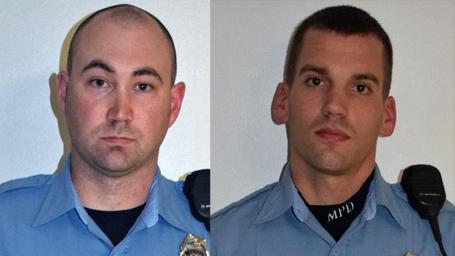 Did US attorney Andrew Luger actually say his, “heart goes out” to the Clark family and that he has a son near Clark’s age, after making sure that the LAW allowed Minneapolis cops to get away with his murder?

Few were surprised with the announcement Wednesday, that the US government represented by Luger’s office, the (in)Justice Department and the FBI concluded that the cold blooded shooting death of Jamar Clark by Minneapolis officers Dustin Schwarze and Mark Ringgenberg did not constitute a civil rights violation in the eyes of the law of the land.

Photo: AP via www.diariodemexicousa.com  (photo inserted by Rise Up Times)

Clark was killed on November 15 last year by Minneapolis officers Schwarze and Ringgenberg after they confronted Clark who was alleged to have interferred with Emergency Medical Technicians (EMT) who were transferring a woman who had sprained her leg. EMT’s reported that they had reason to believe that the woman being transported had been assaulted by Clark, which turned out to be false. Ringgenberg and Schwarze arrived on the scene and according to several witnesses handcuffed Clark who when police arrived was quietly standing on the sidewalk. After handcuffing Clark Ringgenberg threw Clark to the ground and scrambled and got a top Clark according to witnesses. And at some point Schwarze pulled his weapon and shot Clark in the head. None of the witnesses confirm the police version, in which Ringgenberg claimed that Clark had grabbed for his gun and that he then screamed loudly, “he’s got my gun” followed by “shoot him.”

Hennepin County prosecutor Michael Freeman announced on March 30 that his office would not prosecute the cops. While he refused to indict the police he used a near hour long press conference announcing the decision to brow beat, violence bait and chastise the black community.

Yesterday’s decision along with the “fairy tale” that was spun by the cops to justify the killing of Clark, could  lead reasonable people to conclude that the law is farcical, full of hypocrisy, and enforced only against the poor and powerless.

And US Attorney Luger doesn’t have a heart. Just ask the local Somali community whose young people he has been harassing and victimizing and he sure doesn’t see his son in those black immigrant Muslim young people. You can’t work at the highest levels of US government and make coldblooded decisions like this one and have a heart.

Luger and the FBI and the Justice Department while they may look the part with their suits and air of self righteousness, they lack a sense of decency. Incredibly, they crowded into Mr. Clarks fathers house, James Clark to deliver the bad news. Who but the devils minions with no sense of shame would visit the family of the dead young man to give them the bad news, which they helped orchestrate? What nerve! What shamelessness! Thugs behave better than this!

Luger in deciding not to indict Ringgenberg and Schwarze made it clear that the way the law is written they simply didn’t have a case they could take to the jury, because of “substantial evidentiary requirements.” This is an aberration from normal criminal procedures in which suspects are charged based on simply being accused or on the say so of witnesses and cases are pleaded out or a jury is left to decide.

According to section 242 in the federal civil rights code, to prove that someone has been deprived of their Constitutional right, the State must somehow show that the person or person’s depriving someone of life acted “willfully.” On its face this is foolish, of course those cops willfully killed Clark and willfully lied about it and willfully covered it up. They could have just as easily chosen to back off, or they could have left him alone in the first place.

According to the US attorney, he and his office were up against the highest legal standard in criminal law.

In other words, the law is designed to make it nearly impossible to indict police for violence and criminality inflicted on the citizenry. They don’t have this much trouble filling the jails with primarily black and poor people because the laws and standard of law that applies to them is much less stringent.

Probably the biggest surprise in this decision is that some people allowed themselves to be surprised by the US government’s whitewash and rubber stamping of this crime.

It was also shocking that in the midst of rendering what was bound to be an unjust and unsatisfying decision the US attorney actually said it would be “unethical to indict.”

Clearly Luger doesn’t have a grasp on the meaning of the word,” ethical.” Because if he did he would have recognized the irony of making this statement when at the very same time in the federal courthouse in downtown Minneapolis he is prosecuting three Somali young men primarily because of their thoughts. His office in December, brought forth the flimsy case of providing material support to terrorism against 10 Somali youth. www.startribune.com/… And speaking of just throwing charges against the wall for good measure, the loving US Attorney tossed in conspiracy to murder, which if convicted carries a life term.

Only the seriously naïve and misled would actually think that Feds were going to ride to the rescue. Who do folks think are in charge of this corrupt system? The hard lesson or better yet, reminder this decision provides is that the US government and its’ law is not your friend.

Donate
By Rise Up TimesPublished On: June 3rd, 20162 Comments