This report [from September 2015] is based on dozens of interviews in the Twin Cities and San Diego with the defendants’ families, law enforcement, imams and community leaders and a review of court documents.

The FBI finally came for Guled Omar on a Sunday morning.

A squad of agents crashed through the front door of the house on Columbus Avenue in south Minneapolis, raced up the stairs and burst into the room where the 20-year-old Omar slept. Guns drawn, they screamed for his phone, demanding that he give it up before he could alert his friends.

Similar, carefully choreographed arrests played out across the Twin Cities and in San Diego that day in April. By day’s end, Omar and five other young Somali-American men from the Twin Cities were in jail, and Minnesota and its Somali community once again found themselves in the international terrorism spotlight.

May 25, 2016: The trial is now in its third week. More information is now available on “Cali” [Abdirahman Bashir] the FBI informant/operative whose family moved to Minneapolis from San Diego. He was on the stand this week being questioned by the defense attorneys Bruder and Nestor. He was paid a total of $119,000 by the FBI.

For more information on the trial proceedings go to FightBackNews.org and the Twitter account MN Entrapped Youth for regular updates.

More current information on the trial from FightBackNews: 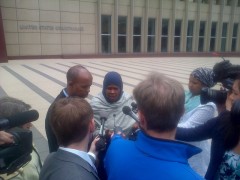 Mother of one of the three defendants demands justice for her son (Fight Back! News/Staff)

Minneapolis, MN – Paid informant Abdirahman Bashir continued his testimony, on May 20th, in packed courtroom at the Minneapolis Federal Courthouse, as the trial of three Somali youth who were entrapped by the FBI entered its ninth day. The cross examination of Bashir is expected to begin on Monday.

The young men, Guled Omar, Abdirahman Daud and Mohamad Farah are facing life in prison on the charges of conspiracy to commit murder abroad and material support of terrorism.

Much of today’s testimony was devoted to listening to tapes that Bashir secretly recorded to implicate the young men who considered him a friend.

The recording showed that Bashir attempted to get the youths to take actions that would lead to federal changes, including obtaining fake passports. At one point in the tapes Bashir offered that he could get an “unlicensed AK-47” and that an arsenal of weapons was available to him.

This trial mirrors many across the U.S. where the FBI manufactures a ‘crime’ and then fits people into it.

Meredith Aby-Keirstead of the Anti-War Committee is urging peace activists and other progressive people to continue to fill the courtroom in coming weeks.

THE INTERCEPT: LISTEN TO AN FBI “HONEYPOT” ON THE JOB

Donate
By Rise Up TimesPublished On: May 25th, 20161 Comment