LAWYERS FOR CHELSEA MANNING appealed her conviction on Thursday, calling it “grossly unfair and unprecedented” and arguing that “no whistleblower in American history has been sentenced this harshly.” 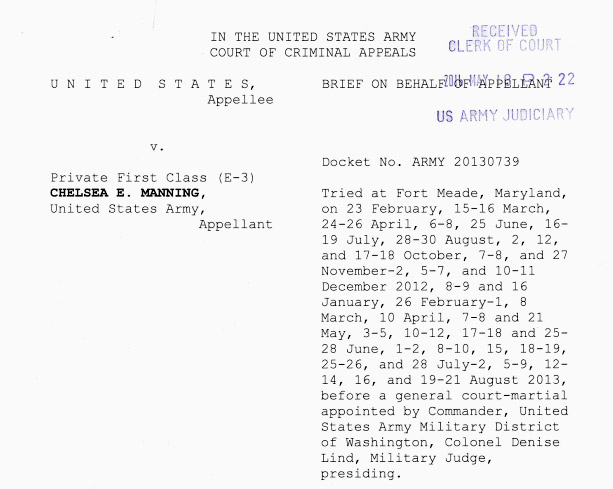 Manning was convicted of six counts of espionage by a military court in 2013 and is currently serving a 35-year sentence in military prison.

In January 2010, while serving as an Army intelligence analyst overseas, Manning – then known as Bradley — sent hundreds of thousands of documents about the Iraq and Afghanistan wars to WikiLeaks. The documents revealed dramatically higher numbers of civilian casualties than were publicly reported and featured a video of Apache attack helicopters in Baghdad gunning down two Reuters journalists.

Manning’s treatment in military court came under fire from journalists and free speech advocates. Because she was indicted under the Espionage Act, she was not allowed to raise the public interest value of her disclosures as a defense.

In the 209-page legal brief made public on Thursday, lawyers for Manning questioned the testimony of military officials at her trial, arguing that their claims of harm were “speculative” and “provided no indication” of actual harm, which they said had a “highly prejudicial” effect on the trial.

The American Civil Liberties Union filed an amicus brief arguing that applying the Espionage Act to whistleblowers is unconstitutional and “furnishes the government with a tool for selective prosecution.”

The ACLU brief cites the example of Gen. David Petraeus, a former Army general and CIA director, who gave eight notebooks filled with classified information to his biographer, who he was sleeping with. Petraeus was not charged under the Espionage Act, accepted a plea deal for two years probation and a $100,000 fine, and kept his security clearance.

NSA whistleblower Edward Snowden has cited Manning’s treatment and trial as a key reason for not returning to the United States.

[Disclosure: First Look Media Works, Inc., publisher of The Intercept, made a $50,000 matching-fund donation to Chelsea Manning’s legal defense fund through its Press Freedom Litigation Fund, and Glenn Greenwald, a founding editor of The Intercept, donated $10,000.]

Donate
By Rise Up TimesPublished On: May 22nd, 20161 Comment