In researching and writing a biography of Angleton, I constantly confront a conundrum: Was the man utterly brilliant? Or completely nuts? 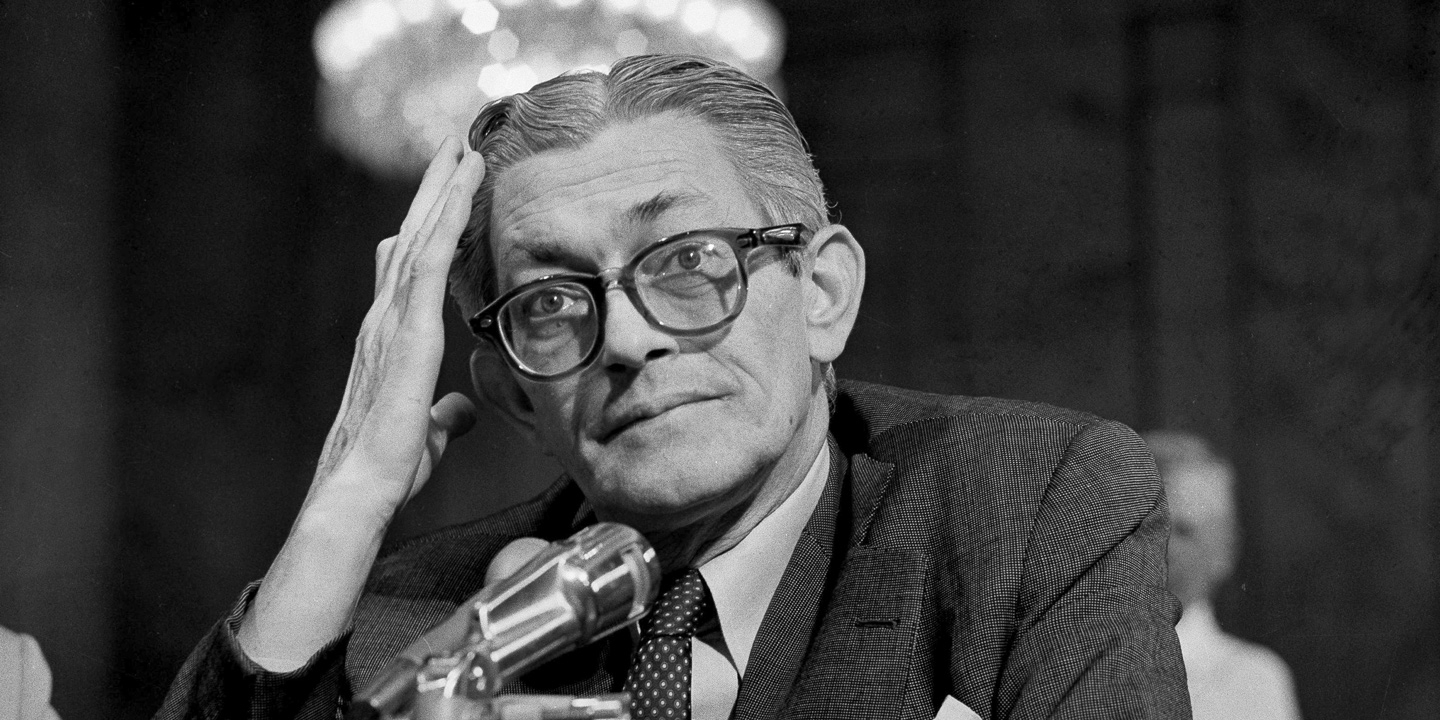 LAST SUMMER I PAID a visit to Georgetown University’s Lauinger Library as part of my research on legendary CIA counterspy James Jesus Angleton. I went there to investigate Angleton’s famous mole hunt, one of the least flattering episodes of his eventful career. By the early 1960s, Angleton was convinced the KGB had managed to insert a penetration agent high in the ranks of the CIA.

In researching and writing a biography of Angleton, I constantly confront a conundrum: Was the man utterly brilliant? Or completely nuts?

Angleton is one of America’s archetypal spies. He was the model for Harlot in Harlot’s Ghost, Norman Mailer’s epic of the CIA, a brooding Cold War spirit hovering over a story of corrupted idealism. In Robert De Niro’s cinematic telling of the tale, The Good Shepherd, the Angletonian character was a promising product of the system who loses his way in the moral labyrinth of secret intelligence operations.

In real life, Jim Angleton was a formidable intellectual and canny bureaucrat who helped shape the ethos of the Central Intelligence Agency we have today. His doctrine of counterintelligence was widely influential, not only in the CIA but in the intelligence services of all the English-speaking countries. He pioneered pre-digital techniques of mass surveillance via an illicit mail-opening program called LINGUAL. He fed the intel to J. Edgar Hoover’s COINTELPRO operatives at the FBI who used it to harass, disrupt, and discredit leftist, antiwar, and civil rights groups from the 1950s to the 1970s. His close liaison with the Mossad in the 1950s and 1960s helped forge a wide-ranging U.S.-Israel strategic relationship that has been central to U.S. foreign policy ever since.

Like them or not, his accomplishments were large. So were his mistakes.

Angleton’s fruitless mole hunt paralyzed the agency’s operations in the Soviet Union in the late 1960s. Speaking in 2012 at a conference on Angleton’s legacy, historian Christopher Andrew offered a nuanced view on the agency’s notorious mole hunter. “When somebody as bright, as distinguished, and so capable of friendship as Jim Angleton makes these sort of appalling errors that he does,” Andrew said, “then we are faced with one of the greatest personal tragedies in the modern history of U.S. and British intelligence.”

Yet no historian can give short shrift to the man whom the Daily Beast recently dubbed “The Spider.” Angleton, who died in 1987, was a master of Cold War power politics, and a seer of the coming U.S. surveillance state. His charisma gained him the confidence of several famous poets, a future pope, four Mossad chiefs, a presidential mistress, a couple of Mafiosos, the odd New York intellectual, and a global network of like-minded spooks.

Whatever his faults, Angleton acted zealously on a theory of history whose validity is hard to accept and hard to dispute. He believed that secret intelligence agencies controlled the destiny of mankind. During his 27-year career at the CIA, from 1947 to 1974, he acted as if the CIA and the KGB were struggling over the future of civilization itself — which, of course, they were.

The Cold War is over and Angleton is gone, but the espionage techniques he mastered — mass surveillance, disinformation, targeted assassination, and extrajudicial detention — remain with us, albeit on a much larger scale. Since September 11, 2001, the power of secret intelligence agencies to shape our future is obvious.

Yet it wasn’t until I went to Georgetown in search of one of Angleton’s darkest secrets that I came away with a personal lesson in how the CIA makes history — by erasing it.

How much damage Angleton’s false accusations did is still disputed.

His defenders insist he protected the agency’s operations far more than he harmed them. One of his critics, veteran intelligence reporter David Wise, says that Angleton ruined the careers of dozens of innocent people.

To clarify the issue, I consulted two collections in the Georgetown library’s manuscript collections. These were the papers of two senior CIA officers who knew Angleton well. Cleveland Cram, a former London station chief, was one of Angleton’s harshest critics in the agency. Ed Applewhite, a classmate of Angleton’s in the Yale class of 1941, was a trusted career officer who worked with the counterintelligence chief.

I hoped the papers of these CIA men might illuminate the financial cost of the mole hunt, something that has eluded Angleton’s previous biographers. It is known that the CIA arranged restitution for some of those falsely accused by Angleton. But the total number of victims and the compensation paid is not something that the agency cares to talk about.

The Applewhite papers looked to be an especially promising source of information. Records for the seven boxes of material that Applewhite’s estate donated to the library in 2005 indicated that he had an extensive correspondence with Peter Karlow, the first victim of Angleton’s mole hunt.

A career CIA officer who lost a foot during World War II, Karlow served in Europe throughout the 1950s, rising in the ranks of the agency’s Technical Services Division, which provides technological solutions to espionage problems (sort of like “Q” in James Bond films). He fell under suspicion in 1962, based on the flimsiest of evidence supplied by Anatoly Golitsyn, a former KGB officer, whose allegations of Soviet penetration entranced Angleton. Hoping to become chief of the Technical Services Division, Karlow was put on leave and subjected to intense FBI surveillance and investigation, which turned up nothing incriminating.

Karlow asked for his job back. Angleton insisted he had not been exonerated, and Karlow was forced to resign in 1963. He was entirely innocent. More than 25 years later, the CIA apologized to Karlow and compensated him with a reported payment of close to $500,000.

According to the library’s records, Applewhite had corresponded with Karlow from 1987 to 1994. Applewhite possessed a memo about Karlow’s request for restitution under a law known as the “Mole Relief Act.” Applewhite also composed an unpublished manuscript that included chapters about Angleton titled “The Bogey Man” and the Robert Ludlum-esque “The Angletonian Captivity.”

A dozen boxes of Cleveland Cram’s papers also offered hope of clarifying what the mole hunt cost in terms of lives and money. In the late 1970s and early 1980s, the CIA hired Cram to write an 11-volume study of Angleton’s tenure as counterintelligence chief. His encyclopedic opus has never been declassified, but Cram was not shy about sharing his severe judgment of Angleton’s professionalism in a separate CIA monograph based on some of his research. The library records for the Cram papers identified a wide range of Angleton-related material.

When I asked to see the Cram and Applewhite papers, a staff archivist told me both collections had been removed from public view. The CIA, he explained, was reviewing the boxes for “security material.” He said he thought the material would be returned “by the fall” of 2015. When I asked to see the library records for the Cram papers again, I was told the CIA had removed those from public view, too.

“They knew you were coming,” Tim Weiner told me. Author of the best-selling CIA history Legacy of Ashes, Weiner suggested the agency had learned I was writing an Angleton biography and acted preemptively to protect itself.

Perhaps insufficiently paranoid, I hadn’t thought of that possibility, but I can’t dismiss it now. Trade publications reported in January 2015 that I had signed a contract for the Angleton biography. The Cram and Applewhite papers were removed from public view in the spring of 2015, according to one Georgetown employee.

I checked with Tom Blanton, director of the nonprofit National Security Archive in Washington, who advised me to file a Freedom of Information Act request for the material. If the agency had possession of the papers, he noted, then it would be legally obliged to separate the classified material and release any unclassified information. If the agency didn’t respond quickly, he noted, I could file a lawsuit.

The CIA’s information and privacy coordinator, Michael Lavergne, wrote back to say the agency couldn’t possibly fulfill my request “as it does not know what the Cleveland Cram papers are or consist of.”

Playing dumb is a CIA art form, so I contacted the Georgetown library’s chief archivists, seeking to know the date when the agency took possession of the papers and how I might better describe the materials for the CIA. When they didn’t respond, I contacted the university’s public affairs office and was finally let in on Langley’s sleight of hand. Georgetown spokesperson John Kenchelian informed me via email that “the CIA has not taken possession of the documents, they are still in Georgetown’s possession.”

That means the Freedom of Information Act does not apply, and thus I have no legal avenue for pursuing the material. I can’t sue the CIA for the Cram and Applewhite papers, because they are not in the hands of the government.

“The CIA will be reviewing the documents at a yet to be determined time and date for potentially classified material,” Kenchelian added.

A CIA spokesperson said the university is “in the process of sending” the Cram and Applewhite papers to the agency.

“We thank Georgetown for its actions to ensure that classified material is not mistakenly disclosed to the public,” the spokesperson said. “Once the files are provided to CIA, we will review and return the documents to Georgetown as expeditiously as possible.”

In any case, the material will not be available while I’m writing my book.

The CIA has the legal right to secure material that is legitimately classified. It is unlikely, however, that the ancient papers of these two deceased men contain any classified information. The CIA isn’t protecting national security. It is covering its proverbial rear end. By removing the Cram and Applewhite papers from public view, the agency has, in essence, redacted some of the details of an embarrassing chapter in the agency’s history. But while the records technically remain in the hands of Georgetown and off-limits to FOIA, the CIA kept this harmless material beyond the reach of law and the eyes of reporters and historians.

Policy and ethics aside, I’m impressed. My attempt to write a more comprehensive history of Angleton’s mole hunt has been limited. My plans to quote Cram and Applewhite on Angleton’s legacy have been called into question. My chapter describing the human toll (and the taxpayer’s bill) for the mole hunt will have to be revised. As I write the story of one of the CIA’s most notorious characters, the agency is redacting my book, and there’s not a damn thing I can do about it. That’s how the CIA writes history.

Rise Up Times featured photo of censored book by Salon.com.

Donate
By Rise Up TimesPublished On: April 27th, 20161 Comment