The tracking of domestic protest groups and peaceful gatherings raises questions over whether DHS is chilling the exercise of First Amendment rights, and over whether the department, created in large part to combat terrorism, has allowed its mission to creep beyond the bounds of useful security activities as its annual budget has grown beyond $60 billion. 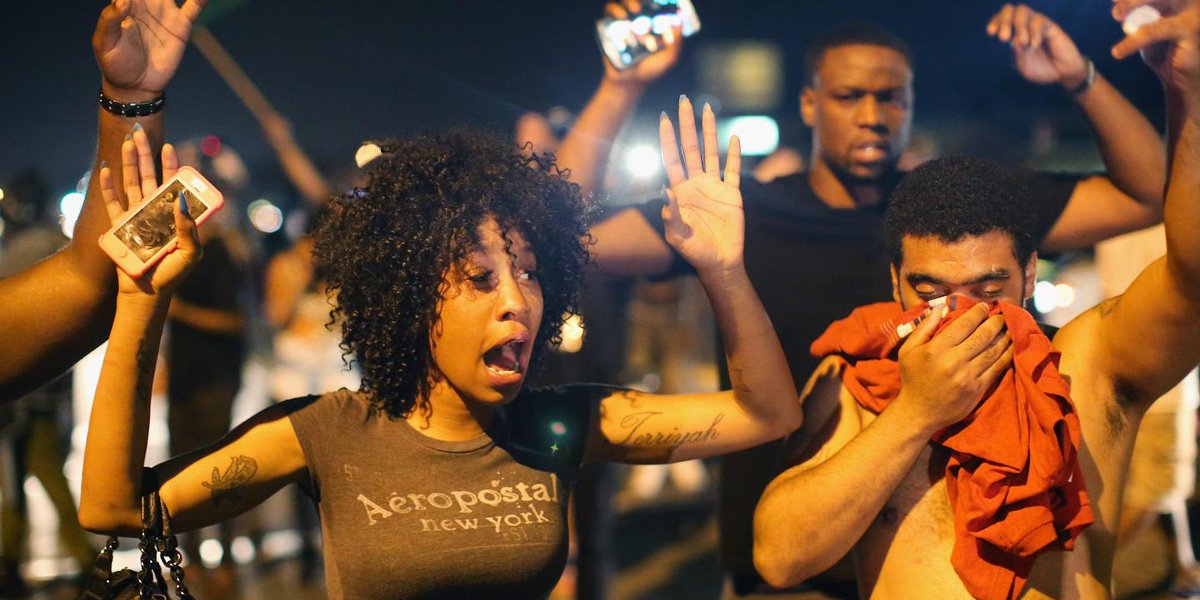 The Department of Homeland Security has been monitoring the Black Lives Matter movement since anti-police protests erupted in Ferguson, Missouri last summer, according to hundreds of documents obtained by The Intercept through a Freedom of Information Act request.

The documents, released by the Department of Homeland Security’s Office of Operations Coordination, indicate that the department frequently collects information, including location data, on Black Lives Matter activities from public social media accounts, including on Facebook, Twitter, and Vine, even for events expected to be peaceful. The reports confirm social media surveillance of the protest movement and ostensibly related events in the cities of Ferguson, Baltimore, Washington, DC, and New York.

They also show the department watching over gatherings that seem benign and even mundane. For example, DHS circulated information on a nationwide series of silent vigils and a DHS-funded agency planned to monitor a funk music parade and a walk to end breast cancer in the nation’s capital.

The tracking of domestic protest groups and peaceful gatherings raises questions over whether DHS is chilling the exercise of First Amendment rights, and over whether the department, created in large part to combat terrorism, has allowed its mission to creep beyond the bounds of useful security activities as its annual budget has grown beyond $60 billion.

The surveillance cataloged in the DHS documents goes back to August of last year, when protests and riots broke out in Ferguson the day after the shooting of unarmed black teenager Michael Brown. According to two August 11th, 2014 reports, a DHS FEMA “WatchOps officer” used information from Twitter and Vine to monitor the riots and reproduced a map, originally created by a Reddit user, of conflict zones. 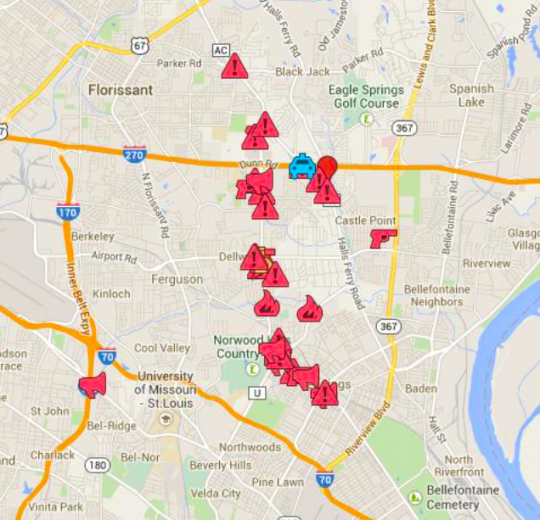 This sort of information gathering was not confined to Ferguson. A few days after rioting and protests there, a DHS email forwarded another message reporting on the “National Moment of Silence,” nationwide silent vigils planned in response to the shooting. The original email listed the cities with planned vigils and noted that they were being spread on social media with the hashtag #NMOS14. It also mentioned that NYPD’s counterterrorism intelligence organization would be “monitoring the situation.” The DHS email forwarding that information said the data was provided “for your situational awareness.”

An April 2015 FEMA memo also shows that the DHS appears to have gathered information on anti-police-brutality protests in Philadelphia “organized by members of the Philly Coalition for Real Justice” and in New York on May Day at “Foley Square, start time 1700… Independent factions are being solicited to join in on a full day of demonstration through various open source social media sites, fliers, posters.”

In an email to The Intercept, DHS spokesman S.Y. Lee wrote: “The Department of Homeland Security fully supports the right of individuals to exercise their First Amendment rights and does not provide resources to monitor any specific planned or spontaneous protest, rally or public gathering. The DHS National Operations Center statutory authority (Section 515 of the Homeland Security Act (6 U.S.C. § 321d(b))) is limited to providing situational awareness and establishing a common operating picture for the federal government, and for state, local, tribal governments as appropriate, in the event of a natural disaster, act of terrorism, or other man-made disaster, and ensures that critical terrorism and disaster-related information reaches government decision-makers.”

Baher Azmy, a legal director at the Center for Constitutional Rights, however, argues that this “providing situational awareness” is just another word for surveillance and that creating this body of knowledge about perfectly legal events is a problem in and of itself. “What they call situational awareness is Orwellian speak for watching and intimidation,” said Azmy. “Over time there’s a serious harm to the associational rights of the protesters and it’s an effective way to chill protest movements. The average person would be less likely to go to a Black Lives Matter protest if the government is monitoring social media, Facebook, and their movements.”

Although Lee says in his email that the department “does not provide resources to monitor any specific planned or spontaneous protest, rally or public gathering,” some of the documents show that the DHS has produced minute-by-minute reports on protesters’ movements in demonstrations. 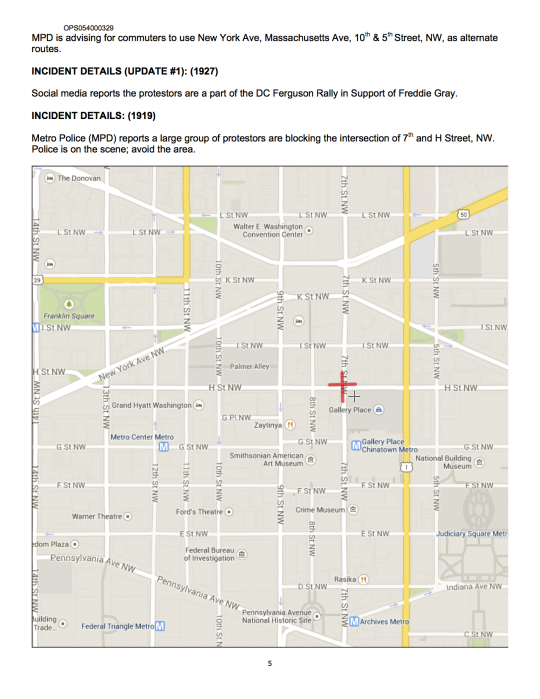 The “Watch Desk” of the DHS’s National Capital Region, FEMA branch compiled this real-time information despite the fact that an FBI joint intelligence bulletin shared among several DHS officials the day before noted that there was “no information suggesting violent behavior is planned for Washington, DC” and that previous anti-police brutality protests in the wake of Ferguson “have been peaceful in nature.” The bulletin also said that for unspecified reasons “we remain concerned that unaffiliated individuals could potentially use this event to commit acts of violence in the Chinatown area.”

This surveillance of the April 29th protest, which the bulletin explicitly refers to as a “First Amendment-protected event,” raises questions about the potentially compromised state of protesters’ civil liberties — a worry that also surfaced after it was revealed in 2012 that the DHS was monitoring Occupy Wall Street.

“It is concerning that the government would be diverting resources towards surveilling citizens who are assembling and expressing their First Amendment rights,” says Maurice Mitchell, an organizer with Blackbird, a group that helps support activism against police violence in communities across the country. “The fact that our government is doing this — I can only assume to disrupt us — is pretty alarming… Directly after 9/11, people said, ‘if you’re not doing anything wrong you have nothing to worry about.’ Well, now we’re fighting back against police brutality and extrajudicial killings, yet they are using this supposedly anti-terrorist infrastructure against us.” 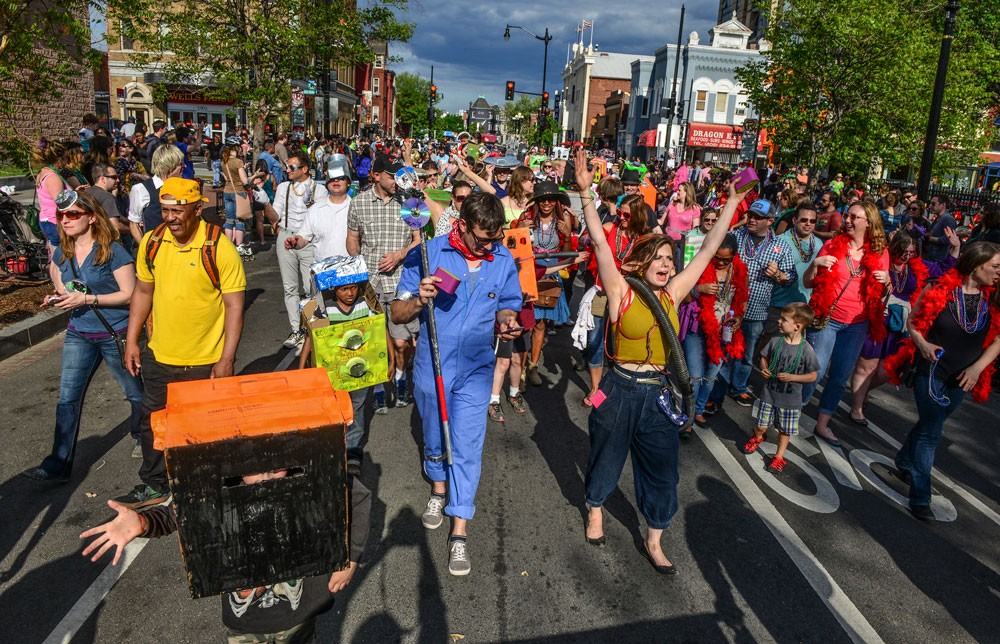 Participants, some dressed as robots, march down T street during the annual DC Funk Parade, on May, 02, 2015 in Washington, DC.

An April 29th email from the DHS National Operations Center also mentions planned  surveillance of three seemingly innocuous events, two of which were associated with historically black neighborhoods. According to the email, the DHS-funded DC Homeland Security & Emergency Management Agency decided to conduct “a limited stand-up… to monitor a larger than expected Funk Parade and two other mass gathering events” in case “any Baltimore-related civil unrest occurs.” It appears that the only Funk Parade in DC occurs in the historically black neighborhood of U Street. The other two events, according to another report, produced by the DHS National Capital Region‘s Information Collection and Coordination Center, were a community parade in Congress Heights, a predominantly black neighborhood, and the Avon 39-Walk to End Breast Cancer.

The documents also elaborate on DHS’s response to riots and militant protests in Baltimore following the death of Freddie Gray, a 25-year-old African American man who in April died from injuries sustained while in police custody. DHS deployed officers on the ground and at intelligence centers. As VICE reported last month, the DHS’ Federal Protective Service placed more than 400 officers on duty in Baltimore after Gray’s death. In response to the anti-police backlash in Baltimore, DHS agencies also “integrated” representatives into two local intelligence centers, the Governor of Maryland’s Operations Center and the Mayor’s Emergency Operations Center. The documents state the DHS’s Federal Protective Service and Office of Infrastructure Protection worked in “close coordination with State and Local partners to monitor the situation” in Baltimore and helped “prepare for a large demonstration” that Saturday.

Brendan McQuade, a visiting assistant professor at DePaul University who researches the DHS’s intelligence-gathering fusion centers, believes that the DHS and its affiliated counterterror organizations monitor Black Lives Matter to such a exacting degree because the terrorist threats they were created to stop are exceedingly remote. “Fusion centers were set up for counterterrorism, but it became ‘all crimes, all threats, all hazards’ because terrorism isn’t a real threat. You are four times more likely to be struck by lighting than killed by a terrorist,” says McQuade. “Even at their moment of emergence it was clear that counterterrorism wasn’t going to be enough.”

Raven Rakia, a journalist who investigates state surveillance and policing, said that the DHS’ decision to monitor Black Lives Matter is hardly surprising, given the federal government’s well documented history of spying on and suppressing black social movements and groups like the Black Panthers. “There’s a long history of the federal agencies, especially the FBI, seeing black resistance organizations as a threat to national security,” says Rakia.

Indeed, the documents provided to The Intercept by DHS may well represent a small fraction of state surveillance against Black Lives Matter. Over the last few years, small bits of evidence have trickled out indicating that other counterterror intelligence organizations like the FBI’s Joint Terrorism Task Force and state police intelligence groups have been involved in monitoring and apprehending Black Lives Matter activists.

Mitchell, the Blackbird activist, says that this continuing surveillance serves not only to keep tabs on black activists, but also to deter them from pushing forward. “Surveillance is a tool of fear. When the police are videotaping you at a protest or pulling you over because you’re a well known activist — all of these techniques are designed to create a chilling effect on people’s organizing. This is no different. The level of surveillance, however, isn’t going to stop us. After all, we organize because our lives depend on it.”

Correction: This article originally misattributed a map of Ferguson activity to DHS. The department monitored social media activity during the protests and rioting there but the map was originally created by a Reddit user. July 24 4:10 pm ET