When war breaks out, most non-combatants run the other way. But a handful of courageous reporters see it as their duty to tell the world what’s happening on the ground. And many pay a high price. 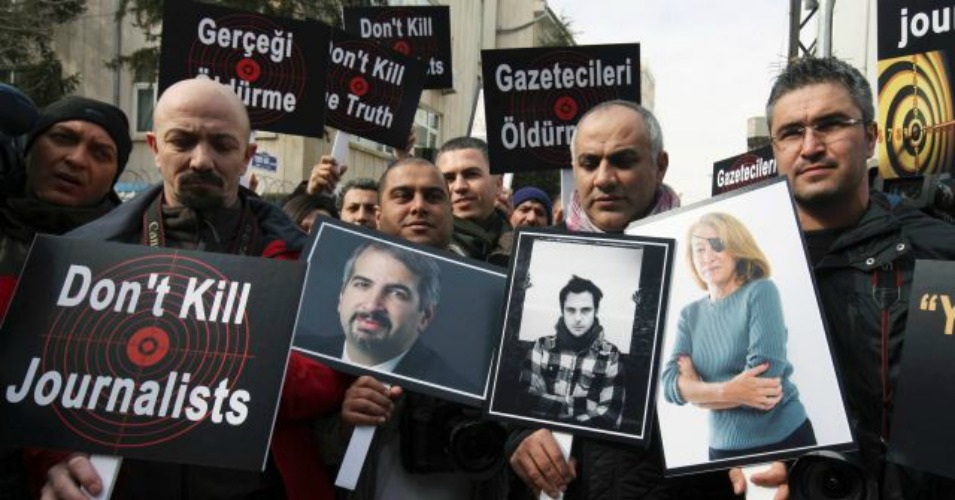 Since 1992, 1,129 journalists have been killed on the job, 38 percent of them in war zones, according to figures compiled by the New York-based Committee to Protect Journalists (CPJ). And increasingly, they are being deliberately targeted.

“As excellent as it may be, there is no certainty that a new resolution will in and of itself be enough to resolve the problem.” — Christophe Deloire of Reporters Without Borders

In an explicit recognition of the key role of the media in peace and security, the U.N. Security Council on Wednesday unanimously adopted a resolution condemning all violations and abuses committed against journalists and deploring impunity for such acts.

“Recent killings of journalists have been given extensive and welcome attention around the world, including the brutal murders of Western media representatives in Syria,” said U.N. Deputy Secretary-General Jan Eliasson.

“Yet we must not forget that around 95 per cent of the killings of journalists in armed conflict concern locally-based journalists, receiving less media coverage,” he added.

Syria remains the deadliest place for journalists, with at least 80 killed there since the conflict erupted in 2011. The second and third places in journalist deaths were shared by Iraq and Ukraine.

According to CPJ, about one quarter of the journalists killed last year were members of the international press, double the proportion the group has documented in recent years.

Eliasson urged member states to implement the U.N. Plan of Action on the Safety of Journalists and the Issue of Impunity, endorsed by the U.N. Chief Executives Board on Apr. 12, 2012.

Its measures include the establishment of a coordinated inter-agency mechanism to handle issues related to the safety of journalists, as well as assisting countries to develop legislation and mechanisms favourable to freedom of expression and information, and supporting their efforts to implement existing international rules and principles.

But this call may fall on deaf ears in some quarters. In March, a military spokesperson for the Saudi-led coalition conducting air strikes in Yemen openly stated that media organisations associated with the Houthi rebels and former Yemeni president Ali Abdullah Saleh are legitimate targets.

On Mar. 18, Abdul Kareem al-Khaiwani a Yemeni journalist from Sana’a, was shot and killed by assailants on motorbikes after representing a Houthi group in a conference on Yemen’s future, while on Mar. 26 Shi’ite Houthi militiamen overran the Sana’a headquarters of three satellite television channels: Al-Jazeera, Al-Yaman-Shabab (Yemen-Youth), and Yemen Digital Media.

On Apr. 20, journalist and TV presenter Mohammed Shamsan and three other staff members of Sana’a-based television station Yemen Today were killed in an airstrike that appears to have deliberately targeted the broadcaster’s office.

Christophe Deloire, director-general of Paris-based Reporters Without Borders, said Wednesday that, “It’s historic that the Security Council should make a link between the right to freedom of expression and the need to protect journalists, even though it may seem obvious.”

But Deloire noted that hundreds of journalists have been killed since the last resolution was adopted in 2006 – 25 this year alone – and “as excellent as it may be, there is no certainty that a new resolution will in and of itself be enough to resolve the problem.”

U.S. Ambassador Samantha Power singled out Colombia, once considered the most dangerous country for journalists in South America, as taking positive action by establishing a 160-million-dollar annual fund to protect 19 groups, including journalists.

Earlier this week, Colombian President Juan Manuel Santos met with representatives of CPJ in Bogota and the Colombian press freedom group Foundation for a Free Press (FLIP) and pledged to prioritise combating impunity in attacks against the press.

While the security situation in Colombia has improved in recent years, impunity is entrenched and threats and violence against journalists continue, according to CPJ research.

“I envision a normal country where journalists won’t need bulletproof cars and bodyguards and will not need any protection,” said Santos, himself a former journalist and one-time president of the freedom of expression commission for the Inter-American Press Association.

“But for now we need to make sure that the programme is properly funded and effective,” he added.

Launched in 2011, the journalist protection programme provides protection for around 7,500 at-risk people, including human rights activists, politicians, and journalists, at a total cost of 600,000 dollars per day.

But the delegation recommended that it also focus on preventing attacks from occurring in the first place.

Colombia ranked eighth on CPJ’s 2014 Impunity Index, which spotlights countries where journalists are slain and their killers go free.

At the Security Council meeting, Deloire from Reporters Without Borders called for the creation of a Special Representative of the Secretary-General for the protection of journalists in order to increase the prominence of the issue within the U.N system.

He stressed that a staggering 90 percent of crimes against journalists go unpunished.

“Such a high impunity rate encourages those who want to silence journalists by drowning them in their own blood,” Deloire said.

This story was originally published on Common Dreams.

← Al Jazeera: The girls of the Lord’s Resistance Army
Chris Hedges and Richard D. Wolff at the Left Forum 2015: Marx: The System is the Problem →