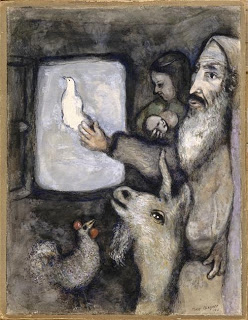 Marc Chagall, Noah lets go the dove through  the window of the Ark (Genesis VIII, 6 9)

I think it is important for Christians to discuss what they really think being “forgiven” for allowing nuclear devastation to happen might look like.At a nuclear disarmament meeting in New York two weeks ago, I said, “I wonder if people of faith will only really be able to become a force for the elimination of nuclear weapons when their respective religions accept — ‘own’ — the role that religion itself has played in bringing about the situation in which nuclear weapons exist today.”Since that time, I have been trying to identify what I think the theological problem that got us into this mess is.“Dominion theology” vs. “Stewardship theology” The rapid increase in understanding of the climate crisis in recent years has been accompanied by much discussion in the Church of where we went wrong with our ideas of “dominion over the Earth.” These days there is much more attention to our responsibility as stewards of the Earth.This is certainly related to the change in attitude that is needed to take seriously the nuclear threat.But I don’t think it is the only, or even the major, theological issue.“Just war”Through my work on opposing drone warfare, I have had the opportunity to learn from people who have been thinking long and hard about the “just war” tradition — and who have been working to challenge it. (See, for instance, Jack Gilroy’s play The Predator, which challenges the (mis)use of “just war” theory to buttress the US drone assassination program.)

It is extremely clear that “just war” theory is a major supporter of the nuclear threat. For instance, a recent viewing of The Fog of War reminded me how someone like former Secretary of Defense Robert McNamara could, at one and the same time, be making an urgent call for the total elimination of nuclear weapons, and yet also falling back on “just war” excuses for the US slaughter of Japanese civilians via fire-bombing and atomic bombing in 1945.

So, again, I think “just war” is part of the problem, but not the central problem. 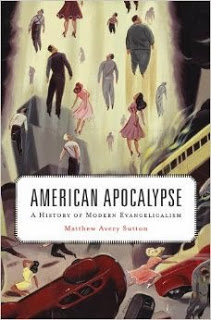 This awareness has stimulated me to try to learn more about pre-millenial thinking, and I have been finding two books very helpful: American Apocalypse: A History of Modern Evangelicalism by Matthew Avery Sutton, and The Rapture Exposed: The Message of Hope in the Book of Revelation by Barbara Rossing. Before, I suppose, I thought of the biblical Book of Revelation as something that could be written off as irrelevant, and those who put stock in the images and ideas in it as marginal. Now I am realizing that both the writing and the people who find it compelling must be understood.Through an article by my sister (“Extreme Injury”by Elaine Scarry in the Boston Review), I became aware of the degree to which people who are involved in the mechanics of the nuclear threat (missileers, production workers, officers) are buttressed by a resignation to a coming divine  Apocalypse.

While I think we need to understand the role of apocalypse theology in buttressing the nuclear threat, I think there is something even more important.

I wonder if our very best theology — the theology that teaches that God loves us, that there is nothing that God will not forgive, and that God is supreme — hasn’t led us astray.

Are there some things that won’t be forgiven?

I think particularly of the story of Noah: doesn’t that teach us that, no matter how bad things get, God won’t abandon (wo)mankind? 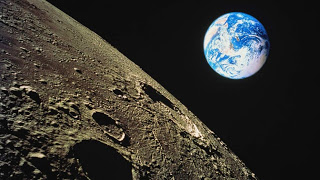 Or is there a difference between “forgiving” and “saving the day”? Is it necessary for us to recognize a distinction between the idea that God can “forgive” us if we destroy our world, but that that isn’t the same as giving us a re-do.

I’m feeling that we have some really difficult theological questions to ask ourselves about a Creation in which God goes on, but people and the Earth have come to an end. Is that outside the bounds of what our theology imagines? Why?

Is it possible that we will only truly understand God’s promise to humanity once we understand that there are some outcomes that would make a mockery of God’s forgiveness, and that God has empowered us to prevent those outcomes, and that it’s now up to us to do so?

Go to your
pastor/rabbi/imam/priest/etc.
and ask:
“What will it take
for our community
to work
for nuclear disarmament
as if we really knew
it’s up to us
to save the world?”
The RiseUpTimes.org featured image is from

6e338-jasmineprasadnonukesblog.jpg
Donate
By Rise Up TimesPublished On: May 13th, 2015Comments Off on ATOMIC HUBRIS: Are There Some Things That Won’t Be Forgiven?