Desperate to win reelection, Israeli Prime Minister Benjamin Netanyahu stripped off Israel’s mask and exposed the ugliness that has deformed his country over the past several decades. He abandoned the subterfuge of a two-state solution, exposed the crass racism that underlies Israeli politics, and revealed Israel’s blatant control of the U.S. Congress.

For years, these realities were known to many Americans, but – if they spoke up – they were condemned as anti-Semites, so most stayed silent to protect their careers and reputations. But – given Netanyahu’s brazen admissions – the American people may have little choice but to finally take notice of this troubling reality and demand a change in U.S. policy.

Click here to help Rise Up Times continue to bring you essential news you won’t find in the mainstream corporate media. 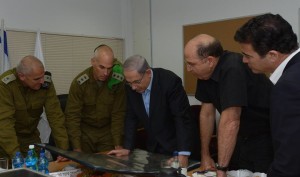 Israeli Prime Minister Benjamin Netanyahu meeting with his generals to discuss the offensive in Gaza in 2014. (Israeli government photo)

The truth is that the two-state solution has been a fiction for at least the past two decades, dying in 1995 with the assassination of Prime Minister Yitzhak Rabin. But the two-state illusion still served important political purposes both for Israelis, who would pay it lip service while continuing their steady encroachment on Palestinian lands, and for U.S. politicians who could point to the mirage as an excuse not to pressure Israel too hard on its human rights violations.

Yet, whenever any U.S. official actually tried to reach that shimmering oasis of a two-state solution, it would recede into the distance. Then, the Israelis would rely on their friends and allies in the news media and politics to blame the Palestinians. Now, however, the illusion of Israel seeking such an outcome in good faith has been lost in Netanyahu’s anything-goes determination to keep his office – a case of political expediency trumping strategic expediency.

In the closing days of the campaign, Netanyahu promised that as long as he was prime minister he would block a Palestinian state and would continue building Jewish settlements on what international law recognizes as Palestinian land.

To further rally his right-wing Jewish base, Netanyahu warned that “Arab voters are streaming in huge quantities to the polling stations” – an alarm similar to racist politicians in the United States motivating the white vote with claims about loads of blacks being bused to the polls. With his crude appeal, Netanyahu undermined the longstanding denial that Zionism is a form of racism.

Even before Netanyahu’s last-minute histrionics, he had exploited his relationship with the United States to burnish his reputation as a world leader by appearing for a record-tying third time as a foreign leader addressing a joint session of the U.S. Congress. (Only Great Britain’s Winston Churchill had appeared three times before Congress.)

Acting as almost a stand-in for the President of the United States, Netanyahu gave what amounted to a faux State of the Union address filled with scary tales about Iran and with dire warnings against international negotiations seeking to ensure that Iran’s nuclear program remains peaceful.

Though some Democrats boycotted the speech because it represented an unprecedented insult to an American president, the Republican majority and many Democrats gave Netanyahu more than 40 ovations as they cheered his vitriolic attacks on Iran and his denunciations of the negotiations supported by President Barack Obama. [See Consortiumnews.com’s “Congress Cheers Netanyahu’s Hatred of Iran.”]

Then, last weekend, a prominent neoconservative Joshua Muravchik admitted that the almost certain outcome of Netanyahu’s scuttling of the negotiations would be to bomb Iran. Muravchik laid out this scenario in a Washington Post article headlined “War is the only way to stop Iran” in print editions and “War with Iran is probably our best option” online.

“What if force is the only way to block Iran from gaining nuclear weapons? That, in fact, is probably the reality,” Muravchik wrote. “Sanctions may have induced Iran to enter negotiations, but they have not persuaded it to abandon its quest for nuclear weapons. Nor would the stiffer sanctions that Netanyahu advocates bring a different result. …

“Does this mean that our only option is war? Yes, although an air campaign targeting Iran’s nuclear infrastructure would entail less need for boots on the ground than the war Obama is waging against the Islamic State, which poses far smaller a threat than Iran does. … Wouldn’t destroying much of Iran’s nuclear infrastructure merely delay its progress? Perhaps, but we can strike as often as necessary.”

In other words, if Netanyahu keeps pulling the strings of the U.S. government, an open-ended war on Iran is the almost certain result. But Netanyahu, for short-term political gain, risked Israel’s longstanding support from the American people by spotlighting his role as the marionette of the U.S. Congress. [See Consortiumnews.com’s “A Neocon Admits the Plan to Bomb Iran.“]

Netanyahu’s reelection victory has clarified the situation for the American people in another way. We now know there will be no two-state solution with the Palestinians as Israel cements its status as an apartheid state – and all the cries of “anti-Semitism” are not likely to silence people taking notice of this reality since the Israeli Prime Minister himself has taken the sting out of the slur.

The American people now have little choice but to recognize that Israel intends to maintain and expand its “Jewish state” pushing the Palestinians into isolated enclaves. For nearly a half century, Israel has exercised effective control over these indigenous people in the West Bank and Gaza (totaling more than 4 million people), but there was always the hope of a Palestinian state.

Now, by jettisoning the prospect of a “two-state solution,” Netanyahu will institutionalize what had long been the unacknowledged fate of the Palestinians. In essence, Netanyahu is opting for a one-state solution, just with most Palestinians confined to a state-less netherworld where they will be denied political rights, left to wither and die.

And, whenever some Palestinians act up, Israel will wage war against them, killing thousands at a time and destroying their homes and infrastructure, what Israelis call “mowing the grass.”

With the facades gone, Americans must decide if they will embrace this apartheid system or not. Many Christian Zionists, who are a powerful force inside the Republican Party, are okay with Israel’s brutal repression because they see the Jews taking this land as a step toward fulfilling a biblical prophecy so Jesus can return to earth as its king.

But rational Americans are confronted with a difficult moral choice. Either continue supporting Netanyahu in brutalizing the Palestinians and in his looming war against Iran (using the U.S. military to carry it out) or insist that the U.S. government reassess its relationship with Israel.

The developments of March 2015 – from Netanyahu’s proconsul-style speech before the U.S. Congress to the racist incitements of his victorious campaign – have forced thoughtful Americans to abandon their longstanding excuses for Israeli behavior.

From now on, there’s no pretending that “standing with Israel” doesn’t mean kneeling in an obsequious acceptance of Netanyahu’s cruelty toward the Palestinians and cooperation in an illegal and aggressive war against Iran.

Investigative reporter Robert Parry broke many of the Iran-Contra stories for The Associated Press and Newsweek in the 1980s. You can buy his latest book, America’s Stolen Narrative, either in print here or as an e-book (from Amazon and barnesandnoble.com). You also can order Robert Parry’s trilogy on the Bush Family and its connections to various right-wing operatives for only $34. The trilogy includes America’s Stolen Narrative. For details on this offer, click here.