The panel’s first review of the U.S. record on preventing torture since 2006 followed racially-tinged unrest in cities across the country this week sparked by a Ferguson, Missouri grand jury’s decision not to charge a white police officer for the fatal shooting of an unarmed black teenager. 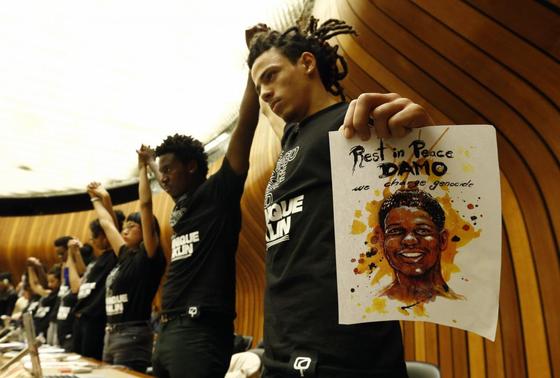 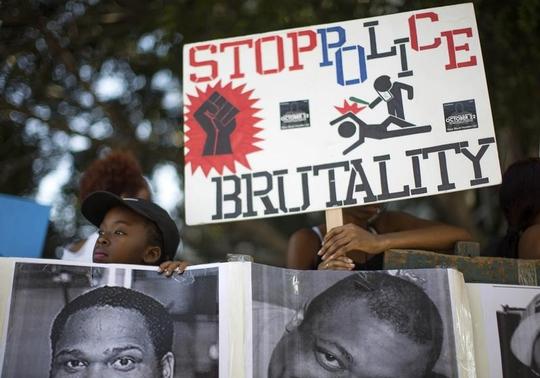 Activists hold hands during a silent protest at a hearing of the United States at the Committee against Torture at the United Nations in Geneva November 13, 2014.  CREDIT: REUTERS/DENIS BALIBOUSE

(Reuters) – The U.N. Committee against Torture urged the United States on Friday to fully investigate and prosecute police brutality and shootings of unarmed black youth and ensure that taser weapons are used sparingly.

The panel’s first review of the U.S. record on preventing torture since 2006 followed racially-tinged unrest in cities across the country this week sparked by a Ferguson, Missouri grand jury’s decision not to charge a white police officer for the fatal shooting of an unarmed black teenager.

The committee decried “excruciating pain and prolonged suffering” for prisoners during “botched executions” as well as frequent rapes of inmates, shackling of pregnant women in some prisons and extensive use of solitary confinement.

Its findings cited deep concern about “numerous reports” of police brutality and excessive use of force against people from minority groups, immigrants, homosexuals and racial profiling.

The panel referred to the “frequent and recurrent police shootings or fatal pursuits of unarmed black individuals.”

“We recommend that all instances of police brutality and excessive use of force by law enforcement officers are investigated promptly, effectively and impartially by an independent mechanism,” said panel member Alessio Bruni, noting “reported current police violence in Chicago especially against African-Americans and Latino young people”.

The U.S. delegation reported that 20 investigations had been opened since 2009 into systematic police abuses and that more than 330 police officers had been prosecuted for brutality.

“We have certain concerns about whether investigations are thoroughly completed and whether punishment of law enforcement (officers) when they have crossed the line are effectively put in place,” committee member Jens Modvig told reporters.

Activists welcomed the findings and called for reforms.

“This report – along with the voices of Americans protesting around the country this week – is a wake-up call for police who think they can act with impunity,” said Jamil Dakwar of the American Civil Liberties Union (ACLU), who attended the review.

The U.N. panel called for ending U.S. custody of migrants including children in “prison-like detention facilities”.

It criticized what it called a continued U.S. failure to fully investigate allegations of torture and ill-treatment of terrorism suspects held in U.S. custody abroad, “evidenced by the limited number of criminal prosecutions and convictions”.

Some 148 inmates are held at the U.S. Guantanamo base in Cuba amid reports, the committee’s report said, of “a draconian system of secrecy surrounding high-value detainees that keeps their torture claims out of the public domain”.

Donate
By Rise Up TimesPublished On: December 5th, 2014Comments Off on U.N. torture watchdog urges U.S. crackdown on police brutality