From:  The Vineyard of the Saker 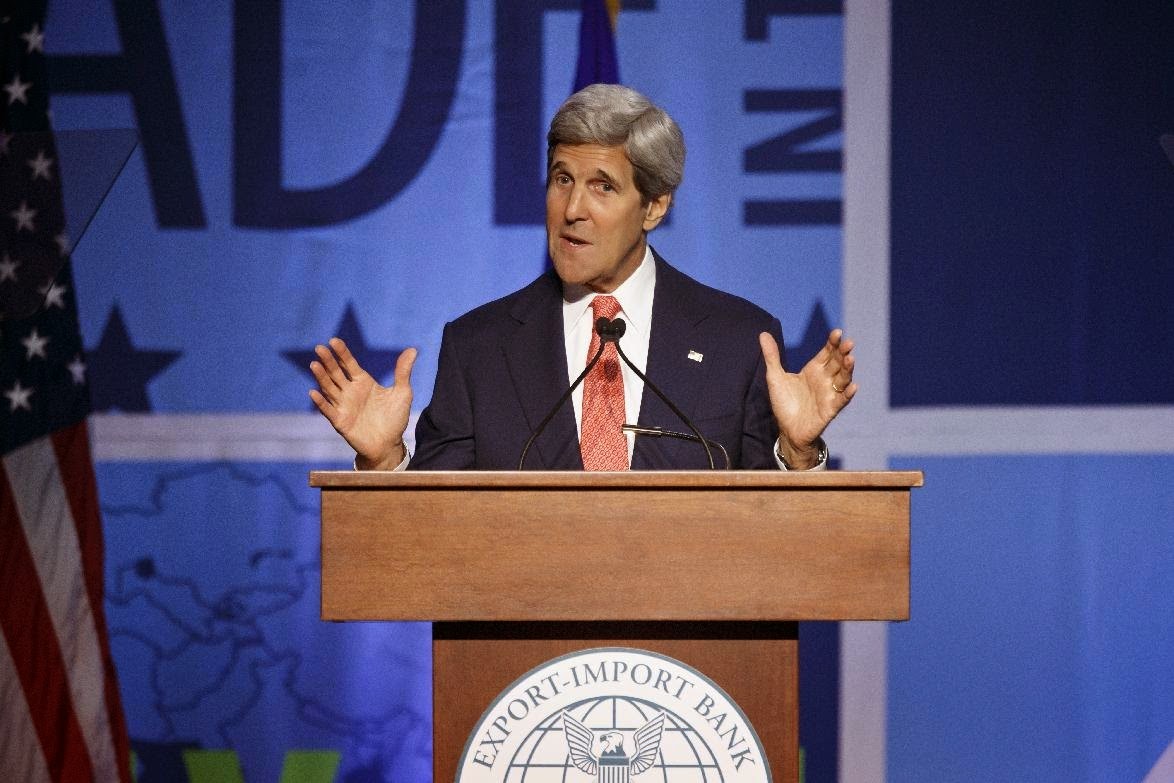 Listening to Kerry today I went through a series of rather contradictory emotions.  First, I felt disgusted, then my disgust turned to anger, then to outright amazement and, by the end, I actually felt rather happy.  Let me explain why.

First, of course, my stomach turns every time I hear this prototypical representative of the 1%er plutocracy speaking to the world as if he was some kind of Emperor-schoolteacher scolding a class of rather dumb and unruly kids for their bad behavior and promising them a spanking.  We all know that folks like Obama or Baby Bush are just puppets, a mostly empty shell shown to the zombified public as “The President and Commander in Chief” while in reality these guys are basically spokesmen.  Not so Kerry.  He is in the Dick Cheney or James Baker class, not quite at the top of the power pyramid, but much higher up.  These are the folks who step in when the mindless puppet makes a mess and some brains are needed on the frontlines.  I find these people profoundly repulsive (though I could not help admiring James Baker’s fantastic diplomatic skills).

My initial disgust turned into rage when I heard Kerry speak such lies that out to make even a politician feel ashamed of himself.   Most of what Kerry said could quite literally be turned around by 180 degrees and become true.  Even though I am now 50 years old and I have seen all sorts of lies, deceptions, betrayals and falsehoods over the years, I still have a naive voice in me screaming “how can he say that?”, “does he not feel horribly ashamed?”, “how can he live with himself?”.  I know.  I am naive and idealistic.  I just cannot get used to it.  Even after 50 years.
Eventually, my rage turned into outright amazement.  At this point, I was beyond good and evil, I was marveling at the nerve it takes to go on world-wide TV and basically state that he earth is not round, but triangular, that 2+2=317 and that black is pink with green dots.  He even added that it was impossible to turn black into grey, that black was just that, black.  At this point I was awed.
And then, suddenly, it hit me.  Kerry and the interests he represents are really terrified and frustrated.  His statement is a desperate attempt to do what the lawyers call the “last resort rule“.  It goes like this: “If you have the law, hammer the law. If you have the facts, hammer the facts. If you have neither the law nor the facts, hammer the table”.  Kerry was hammering the table really very, very strongly and that, I realized, was an implicit admission that neither the (international) law nor the facts were on his side.  Had the facts or the law been on his side, there would have been no need for table hammering, of course.
His panic and frustration also showed in his rather clumsyattack on the Russia Today TV channel.  Here is what he said:

In fact, the propaganda bullhorn that is the state-sponsored Russia Today program, has been deployed to promote – actually, Russia Today network – has deployed to promote President Putin’s fantasy about what is playing out on the ground. They almost spend full time devoted to this effort to propagandize and to distort what is happening or not happening in Ukraine. Instead, in plain sight, Russia continues to fund, coordinate, and fuel a heavily armed separatist movement in Donetsk.

But think about it:  Russia Today does not broadcast in Ukrainian or Russian.  It broadcasts in English, Spanish and Arabic.  The only thing RT does broadcast in Russian are its documentaries on its dedicated website:http://doc.rt.com/on-air/.  This is a tiny fraction of what the channel really does and its audience in Russia or the Ukraine is minute compared to the one of the big Russian TV channels.  So why did Kerry single our Russia Today?  The answer is obvious, of course, it is because Russia Today is a very popular TV channel outside Russia or the Ukraine. According to Wikipedia,

The network’s signal is carried by 22 satellites and over 230 operators, which allows some 644 million people to watch the channel in more than 100 countries. RT America is available to 85 million people in the United States.  In 2011 it was the second most-watched foreign news channel in the U.S. after BBC World News, and the number one foreign station in five major U.S. urban areas in 2012. It is also very popular among younger American people, U.S. college students, and in U.S. inner city neighborhoods. In 2013 RT has become the first TV news channel in history to reach 1 billion views on YouTube. According to the Broadcasters’ Audience Research Board between 2.2–2.3 million Britons tuned their televisions to RT during the second half of 2012, making it the fourth-most watched rolling news channel in Britain, behind BBC News, Sky News and Al Jazeera English.

Remember the candid admission of Walter Isaacson, chairman of the Broadcasting Board of Governors, who openly declared that,

“We can’t allow ourselves to be out-communicated by our enemies, you’ve got Russia Today, Iran’s Press TV, Venezuela’s TeleSUR, and of course, China is launching an international broadcasting 24-hour news channel with correspondents around the world [and has] reportedly set aside $6 -10 billion dollars – we have to go to Capitol Hill with that number – to expand their overseas media operations.”

So there you have it.  The problem is not that Russia Today is stirring up the people of eastern Ukraine, the problem is that thanks to Russia Today the people in the West are beginning to see through the official propaganda!  That is the real reason for Kerry frustrated outburst.
So, to sum things up:
1) The law is not on Kerry’s side.
2) The facts are not on Kerry’s side.
3) The people in the West are beginning to see through the lies of the propaganda machine.
4) There is nothing the Empire can do about any of that.
If any confirmation of that was needed, it came today with the amazing performance of Mark Levine on today’s CrossTalk show.  It’s not on YouTube yet, but you can watch it here: http://rt.com/shows/crosstalk/154788-ukraine-info-war-russia/.  Levine turned CrossTalk into CrossShout, another clear case of “table hammering”.  Why – for the same reasons as Kerry.  Nothing else works for him anymore.
Ever since Putin came back to power, Russia is not playing by the same set of rules as the ones drafted by the Empire.  Both in Syria and the Ukraine, Russia has been very carefully but steadily pushing back the international AngloZionist plutocracy and loosening its grip on the planet and this is directly reflected in the impotent rage of Kerry and his fellow 1%ers.
This, I think, is very good news indeed.
Cheers,
The Saker

Donate
By Rise Up TimesPublished On: April 27th, 20142 Comments