Letter to Judge Thompson Regarding Restitution

I am writing to inform you that I will not willingly pay the court-ordered restitution of $200 as the result of our conviction for the frac sand protest of April 29, 2013 and our trial verdict of February 6. To do so would make us further complicit in human-caused climate change because of your decision to make such a payment as restitution to frac sand profiteers rather than a fine which might accrue to victims of crime. Your choosing that penalty directly implicates you in support of the on-going destruction of the landscape and the endangerment of our water and air. 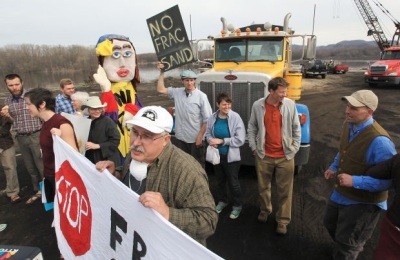 I know our trial was about us, the defendants, but you took the opportunity with the jury excused to lecture us about civil disobedience and taking the consequences for our actions. I wish you had continued in that vein and would talk about the role of the courts and judges in sentencing people like Martin Luther King. Would you have ordered him to pay restitution to the racist governmental leaders? Would you have ordered him to “behave himself” and not risk arrest again for one year as our world is increasingly threatened by potentially apocalyptic climate change?

You strive to be “content neutral” in your rulings from the bench but my I remind you of the late historian Howard Zinn who forcefully wrote histories of social change and said, “You can’t be neutral on a moving train”? I understand your argument about the quicksand nature of protests which land before the courts, running the gamut from landmines to abortion, from Klu Klux Klan to civil rights. But you did choose to take sides in court when you agreed with Prosecutor Flaherty to order restitution in this case. Where is restitution really needed? Can you order restitution to the Mississippi River because it is being endangered? Can you order restitution to our air, to the water table? Why is it that corporations, a legal construct designed to limit liability, are favored by our judicial system rather than nature itself which seems to have no standing before the court?

If the judiciary is to, in fact, act as a check-and-balance on the other two branches of our government in our “messy democracy”, at what point will it weigh in on crucial political issues to help move public opinion? You pointed out how difficult it is to change public opinion within a democracy. Was your sentencing designed to be your “public comment” on the frac sand industry which threatens both the beauty and livability of your city for the sake of short-term profits? Or could you use your position to take a risk by speaking out on behalf of the river flowing by just blocks from your judicial chamber?

Enclosed is the $85 court costs fee. You can gather my account number and bank off the check if you wish to seize my money to pay those you see as “victims” of my “crime” but I will not pay it voluntarily. I bear you no ill will or animosity. I felt you treated us respectfully in the court. My lack of compliance is an act of conscience, a withdraw of consent on behalf of the governed. Please also note my Rosa Parks stamp on the envelope.