The vast expenditures of the U.S. government and its client here simply can’t be designated as contributions toward “security.” These funds have contributed to insecurity and danger while failing to address basic human needs.

By Kathy Kelly  January 6, 2014  Direct to Rise Up Times
Kabul — The fire in the Chaman e Babrak camp began in Nadiai’s home shortly after noon.  She had rushed her son, who had a severe chest infection, to the hospital. She did not know that a gas bottle, used for warmth, was leaking; when the gas connected with a wood burning stove, flames engulfed the mud hut in which they lived and extended to adjacent homes, swiftly rendering nine extended families homeless and destitute in the midst of already astounding poverty. By the time seven fire trucks had arrived in response to the fire at the refugee camp, the houses were already burned to the ground. 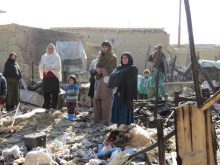 Refugees in the Chaman e Babrak camp stand amid the rubble

No one was killed. When I visited the camp, three days after the disaster, that was a common refrain of relief. Nadiai’s home was on the edge of the camp, close to the entrance road. Had the fire broken out in the middle of the camp, or at night when the homes were filled with sleeping people, the disaster could have been far worse.
Even so, Zakia, age 54, said this is the worst catastrophe she has seen in her life, and already their situation was desperate. Zakia had slapped her own face over and over again to calm and focus herself as she searched for several missing children while the fire initially raged. Now, three days later, her cheeks are quite bruised, but she is relieved that the children were found. 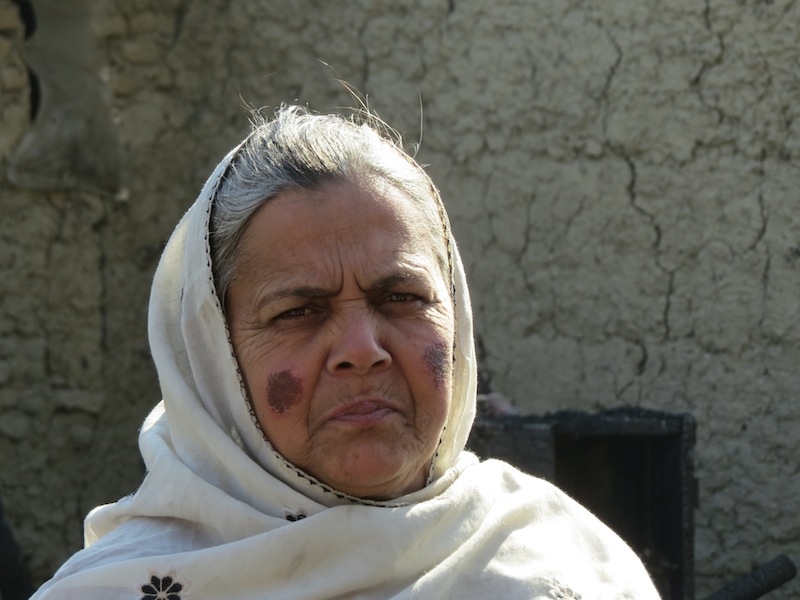 Zakia, with bruised cheeks, who survived the fire.

Standing amid piles of ashes near what once was her home, a young mother smiled as she introduced her three little children, Shuba, age 3 ½, and Medinah and Monawra, twin girls, age 1 ½.   They were trapped in one of the homes, but their uncle rescued them.
Now the nine families have squeezed in with their neighbors. “We are left with only the clothes on our body,” said Maragul. She added that all of the victims feel very grateful to their neighbors. “We cook together,” she said, “and they offer us shelter at night.” Three or four families will sleep together in one room. Asked if their neighbors were all from the same clan, Maragul, Nadiai and Zakia immediately began naming the different ethnic groups that are among their neighbors. Some are Turkman, some Uzbek, some from Herat or Kabul, others are Pashtun, and some are Kuchi. The women said that they begin to feel like brothers and sisters, living together in these adverse circumstances.
The Chaman e Babrak refugee camp spills over the grounds of a large field formerly used for sporting events. With 720 families crowded into the camp, it is second in density and size only to the Charahi Qambar refugee camp, on the outskirts of Kabul, which is twice as large and more than twice as full as the Chaman e Babrak camp.
Years ago, before the Taliban originally captured Kabul, some of the families in this camp had rented homes in the area. They had fled to Pakistan to escape the fighting, hoping to find a future with security and work. After the U.S. invasion, with President Karzai’s accession to power, they’d been urged to return, told that it was safe to go back. But upon their return they’d learned their old homes and land now belonged to victorious warlords, and they learned again that safety is painfully elusive in conditions of poverty and the social disintegration that follows years, and in their case decades, of war.
Asked about prospects for their husbands to find work, the women shook their heads. Nadiai said that her husband has occasional work as a porter, carrying materials in a wheelbarrow from one site to another. Sometimes construction projects will hire him, but in the winter months construction projects are closed and already scarce work vanishes altogether. And war, in a sense, brings its own winter along with it: Next to the camp is a construction project that has been dormant since 2008. It had been intended to become an apartment building.
There was never any plan announced to house these families, even before the fire. And since the fire, there has been no offer of aid aside from those seven fire trucks, rushing in to contain an immediate threat not only to the camp but of course to neighboring businesses, several wedding halls and a plastic surgery hospital, up against which, in a city no stranger to glaring contrasts of wealth, the camp finds itself pressed. I came to the camp with young activists of the Afghan Peace Volunteers there to distribute heavy coverlets, (duvets), manufactured with foreign donations by local seamstresses, precisely for distribution free of charge to Kabul’s neediest people in the winter months. The UK sister organization to my own group, Voices for Creative Nonviolence, will distribute food packages in the camp during the coming week.
We’ll never know who the fire might have killed, because when the old or the young die from the pressures of poverty, of homelessness, of war, we can’t know which disaster tipped the balance.  We won’t know which catastrophe, specifically, will have taken any lives lost here to this dreadful winter.  Many will be consumed by the slow conflagration of widespread poverty, corruption, inequality and neglect.
As many as 35,000 displaced persons are now living in the slum areas in Kabul alone.  “Conflict affects more Afghans now than at any point in the last decade,” according to Amnesty International’s 2012 report, Fleeing War, Finding Misery. “The conflict has intensified in many areas, and fighting has spread to parts of the country previously deemed relatively peaceful. The surge in hostilities has many obvious consequences, among them that families and even entire communities flee their homes in search of greater security. Four hundred people a day are displaced in Afghanistan, on average, bringing the total displaced population to 500,000 by January 2012.”
The vast expenditures of the U.S. government and its client here simply can’t be designated as contributions toward “security.” These funds have contributed to insecurity and danger while failing to address basic human needs. The realpolitik of an imperial power, as utterly disinterested in security here as it seems to be in its own people’s safety at home, will not notice this camp. As we pull together in our communities to enkindle concern, compassion, and respect for creative nonviolence, we are in deep winter hoping for a spring.  We are right to work and to hope, but faced with the spectacle of winter in Chaman e Babrak I can’t help remembering Barbara Deming’s lines:  “Locked in winter, summer lies; gather your bones together. Rise!”
Kathy Kelly (kathy@vcnv.org) co-coordinates Voices for Creative Nonviolence (www.vcnv.org).  In Kabul, she is a guest of the Afghan Peace Volunteers (ourjourneytosmile.com)
Photo credits:  Abdulai Safarali
Related
KATHY KELLY: AFGHAN STREET CHILDREN BEG FOR CHANGE

Donate
By Rise Up TimesPublished On: January 8th, 2014Comments Off on Kathy Kelly: Locked in Winter