By Kathy Kelly  December 30, 2013
Kabul, Afghanistan is “home” to hundreds of thousands of children who have no home.  Many of them live in squalid refugee camps with families that have been displaced by violence and war.  Bereft of any income in a city already burdened by high rates of unemployment, families struggle to survive without adequate shelter, clothing, food or fuel. Winter is especially hard for refugee families.  Survival sometimes means sending their children to work on the streets, as vendors, where they often become vulnerable to well organized gangs that lure them into drug and other criminal rings.
Subscribe or “Follow” us on RiseUpTimes.org. Rise Up Times is also on Facebook! Check the Rise Up Times page for posts from this blog and more! “Like” our page today. Find us on TWITTER at Rise Up Times(@touchpeace). Rise Up Times is also on  Pinterest, Google+ and Tumblr.
Last year, the Afghan Peace Volunteers (APV), a group of young Afghans who host me and other internationals when we visit their home in Kabul, began a program to help street children enroll in schools.  They befriend small groups of children, get to know the children’s families and circumstances, and then reach agreements with the families that if the children are allowed to attend school and reduce their working hours on the streets, the APVs will compensate the families, supplying them with oil and rice.  Next, the APVs buy warm clothes for each child and invite them to attend regular classes at the APV home to learn the alphabet and math.
Yesterday, Abdulhai and Hakim met a young boy, Safar, age 13, who was working as a boot polisher on a street near the APV home.  Abdulhai asked to shake Safar’s hand, but the child refused. Understandably, Safar may have feared Abdulhai.  But when Abdulhai and Hakim told Safar there were foreigners at the APV office who were keen to help, he followed them into our yard.
Sitting next to me, indoors, Safar continued shaking from the cold. We noticed that he had an angry red welt across his right cheek.  Safar said that the previous day he had tried to warm his hands over an outdoor bar-b-que grill, and the cook hit him across the face with a red hot skewer to shoo him away.  Safar clutched a half-filled small plastic Coca-Cola bottle in his hands.  Asked why he was drinking cold soda on such a cold day, he said that he had a headache.
He was wearing a hoodie, light pants, and plastic slippers. He had no socks or gloves– hardly adequate attire for working outside in the bitter cold all day.   On a “good” day, Safar can earn 150 Afghanis, a sum that amounts to $3.00 and could purchase enough bread for a family of seven and perhaps have some left over to purchase clothes. 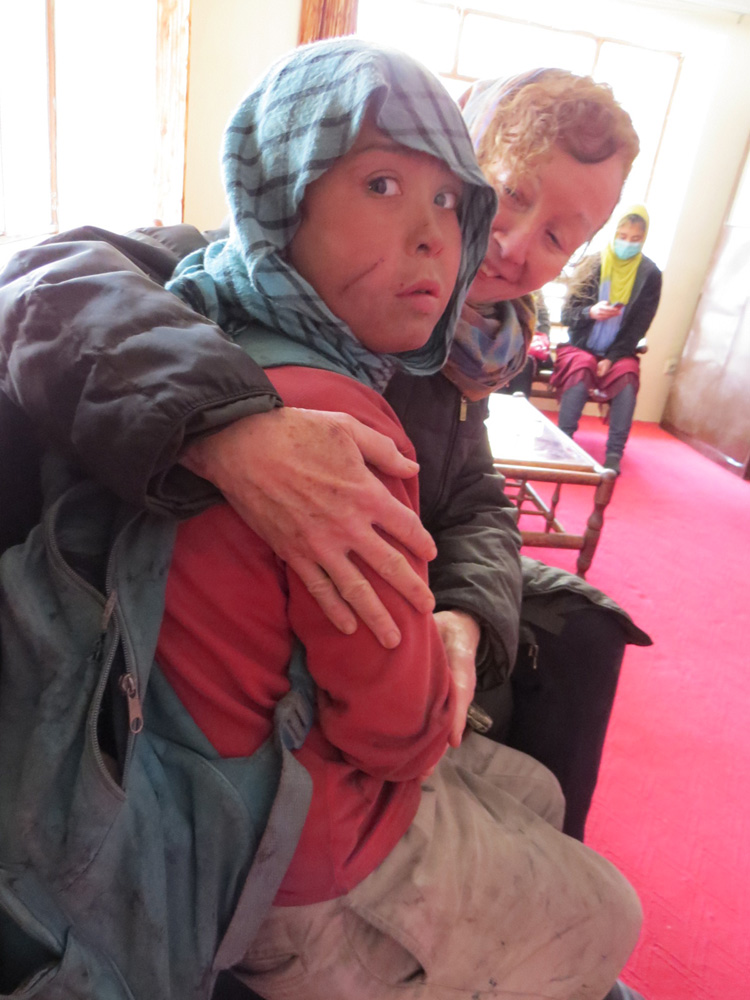 Abdulhai and Hakim asked Safar to come back the next day with some of his friends.  One hour later, he arrived with five friends, two Pashto boys and three Tajiks, ranging in age from 13 to 5. The children promised to return the next day with more youngsters.
And so this morning seven street children filed into the APV home. None of them wore socks and all were shivering.  Their eyes were gleaming as they nodded their heads, assuring us that they want to join APV’s street kids program.
Here in Kabul, a city relatively better off than most places in Afghanistan, we have electricity every other day.  When the pipes freeze and there’s no electricity, we have no water. Imagine the hardships endured by people living with far less.   Even in the United States, thousands of children’s basic needs aren’t met.  The New York Times recently reported that there are 22,000 homeless children living in New York City.
Thinking of how the U.S. has used its resources here in Afghanistan, where more than a trillion has been spent on maintaining war and occupation, I feel deep shame.  In 2014, the U.S. will spend 2.1 million dollars for every U.S. soldier stationed in Afghanistan.  Convoys travel constantly between US military bases, transporting large amounts of fuel, food and clean water — luxury items to people living in refugee camps along their routes – often paying transportation tolls to corrupt officials, some of whom are known to head up criminal gangs.
While the U.S. lacks funds to guarantee basic human rights for hundreds of thousands of U.S. children, and while U.S. wars displace and destroy families in Afghanistan, the U.S. consistently meets the needs of weapon makers and war profiteers.
Even so, the inspiring activities of my young Afghan friends fuel a persistent hope.  Heavy coverlets, called duvets, are bulging out of several storage rooms in the APV home.  Talented young women have coordinated “the duvet project,” now in its second year, involving 60 women who produce a total of 600 duvets every two weeks for distribution to impoverished families.  The seamstresses are paid for each duvet they make.  In a society where women have few if any economic opportunities, this money can help women put food on the table and shoes on their children’s feet. The women equally represent three of the main ethnic divisions here in Kabul, –Hazara, Pashto, and Tajik — an example that people can work together toward common goals.  The young people work hard to develop similarly equal distribution amongst the neediest of families.  Today they delivered 200 duvets to a school for blind children.  Later in the day they will hike up the mountainside to visit widows who have no income.
This afternoon, 2 dozen young girls will be compensated for embroidering 144 blue scarves that proclaim “Borderfree” in Dari and English.  The blue scarves, which are now being distributed in various parts of the world, symbolize the reality that there’s one blue sky above us. Activists in numerous peace and justice campaigns have been wearing the blue scarves.
Here in Kabul, our young friends gathered together on the evening of the winter solstice for music and celebration.  At one point, they sat quietly, their faces illuminated by candle light, as each person in the circle said what they hoped would change, in the coming year, to help bring the world closer to peace.  The visions danced – I hope children will be fed… I hope we won’t buy or sell weapons… I hope for forgiveness.
The light shines in the darkness, and the darkness has not overcome it.  The collective yearning and longing of children who deserve a better world may yet affect hearts and minds all over the world, prompting people to ask why do we make wars? Why should people who already have so much amass weapons that protect their ability to gain more?
I hope we will join Afghanistan’s children in begging for change.
Kathy Kelly (kathy@vcnv.org) co-coordinates Voices for Creative Nonviolence (www.vcnv.org).  In Kabul, she is a guest of the Afghan Peace Volunteers (www.ourjournetytosmile.com)

Donate
By Rise Up TimesPublished On: January 4th, 20141 Comment