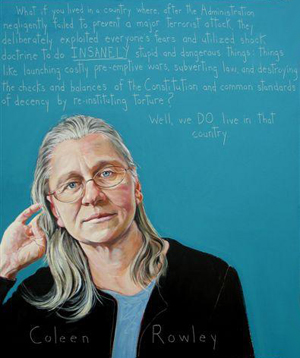 Lighting Candles in the Dark

Portrait of Coleen Rowley by realist painter Robert Shetterly in the series, “Americans Who Tell the Truth:  Models of Courageous Citzenship.”

Within Robert Shetterly’s portrait of her in his series “Americans Who Tell the Truth,” a quote from Coleen Rowley reads: “What if you lived in a country where, after the Administration negligently failed to prevent a major terrorist attack, they deliberately exploited everyone’s fears and utilized shock doctrine to do insanely stupid and dangerous things: things like launching costly preemptive wars, subverting law, and destroying the checks and balances of the Constitution and common standards of decency by reinstituting torture?
Well, we do live in that country.”
But Edward Snowden does not. Not any more. After working for a government contractor and blowing the whistle on the NSA’s massive surveillance of Americans, he is living in exile in Russia. That’s why Coleen, along with three other U.S. whistleblowers, all Sam Adams Associates for Integrity in Intelligence, had to travel to Moscow this past October in order to deliver an award to him. Together with Coleen, former high-ranking CIA analyst Ray McGovern, former senior NSA official Thomas Drake, and Jesselyn Radack, a former Justice Department professional responsibility official, awarded Snowden the Sam Adams Corner-Brightener Candlestick Holder. (Sam Adams was a CIA analyst whose efforts to expose truth about the Vietnam War were thwarted within official channels.)
Coleen commented on the visit with Snowden: “We had quite a bit of time to talk to him, even without his attorney present. I have not met anyone so squared away, so well grounded. He is solely focused on the issue of reform. He kept bringing the conversation back to how the massive spy operation can be fixed and about what efforts could be launched in Europe and in the United States. He had just given a statement that was read by proxy to the European Union Committee on Human Rights the week before and so there was discussion on how that could be built on and maybe how in the United States he could testify before Congress.”
Early in November, Snowden sent a letter via a German parliamentarian, stating that he would like to testify before the U.S. Congress about surveillance activities. (In the wake of revelations that the NSA spied on German citizens, including the cell phone calls of German Chancellor Angela Markel, he also said he would testify in Germany.) But U.S. officials continue to reiterate that, though they would not torture or kill him, he will face felony charges for leaking classified information, making it obvious that they prefer to punish him for telling the truth rather than have him testify within government channels.
Coleen Rowley as Chief Division Counsel for the FBI in Minneapolis, was allowed to testify before the Senate Judiciary Committee in 2002 on pre-9-11 failures. Since leaving the FBI, for several years now, she has been an uber justice and peace activist—and we are proud to make this full disclosure—serves on the all-volunteer WAMM Board. One of her concerns is that the NSA, with both its government agencies and private contractors, wants to listen in on everyone!
“NSA with both its government agencies and private contractors wants to listen in on everyone! Edward Snowden blew the whistle so all of us could hear when he said, “I don’t want to live in a world where everything that I say, everything I do, everyone I talk to, every expression of creativity, or love, or friendship is recorded, and that’s not something I’m willing to support, it’s not something I’m willing to build, and it’s not something I’m willing to live under.”

That’s why Edward Snowden blew the whistle. He said, “I don’t want to live in a world where everything that I say, everything that I do, everyone I talk to, every expression of creativity, or love, or friendship is recorded, and that’s not something I’m willing to support, it’s not something I’m willing to build, and it’s not something I’m willing to live under.”
Congress moved closer to creating that kind of world in November when legislation passed in the Senate Select Committee on Intelligence. Michelle Richardson, Legislative Counsel, ACLU Washington Legislative Office calls it, “Dianne Feinstein’s Fake Surveillance Reform.” She wrote that’s because:
the legislation would make clear in no uncertain terms that communication records like phone, email, and internet data can be collected without even an ounce of suspicion, pursuant to the so-called privacy rules already in place…For the first time in history, Congress would explicitly and intentionally authorize dragnet domestic spying programs targeting every day Americans.
The Feinstein bill also makes the current situation even worse. It gives the government a 72-hour grace period to warrantlessly spy on foreigners who enter the U.S., without even the attorney general approval that is currently required in emergency situations. It explicitly states that none of its provisions should be read to prevent law enforcement from digging through massive NSA databases for evidence of criminal activity.—
Richardson calls for real NSA reform instead. So, too, do Coleen Rowley, Daniel Ellsberg, Glenn Greenwald, former U.S. Senator James Abourezk, Naomi Klein, Laura Flanders, Cornell West, David Swanson and others in the Roots Action Team who endorse the Leahy-Sensenbrenner bill—dubbed the USA FREEDOM Act (the Leahy-Sensenbrenner bill S1599/HR3361). They say that it is a real step toward fully ending the NSA’s outrageous abuses and quote Electronic Frontier Foundation, which also advocates for this legislation: “We know that no bill is perfect, but the USA FREEDOM Act [] could well be our best shot at fixing some of the worst problems with NSA surveillance. That’s why we’re urging members of Congress to support the bill, work to improve the bill through the amendment process, and above all to resist efforts to undermine the privacy protections offered by the bill.”
Edward Snowden said he did what he did to get the nation to focus on discussing massive surveillance of the public. The critical for citizens to engage now because the discussion is in full force in Congress. Coleen Rowley, who lives in Minnesota and once ran for a congressional seat, comments that Minnesota’s senators Amy Klobouchar and Al Franken are both on the Senate Judiciary Committee but tend to follow Dianne Feinstein in voting. Let’s be sure they hear from us and throw more light on the issue.
ACTION: Call your senators today, or go to RootsAction.org to have an electronic message sent.
© 2013 Women Against Military Madness.

Donate
By Rise Up TimesPublished On: December 11th, 20135 Comments