By Kathy Kelly  Direct to Rise Up Times

While catching up with one another over the challenges facing ordinary Afghans and Egyptians, Sherif Sameer and I talked about how ‘opening our eyes’ could go a long way to building a better world. We decided to co-write this piece, from Ismailia, Egypt and Kabul, Afghanistan. 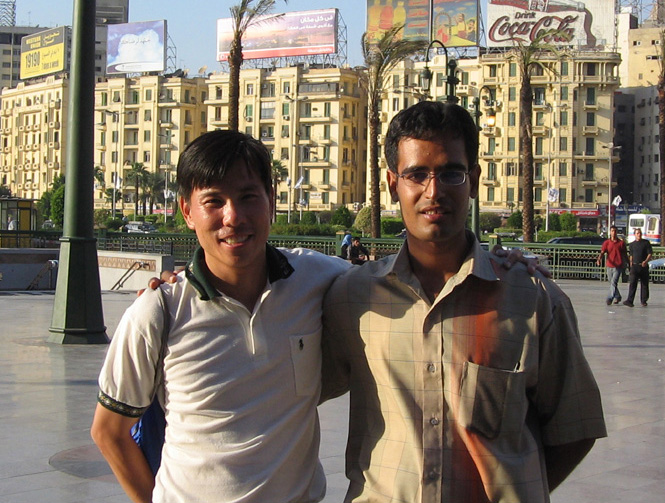 Open Our Eyes in Egypt

The truth is there, clear and burning like a sun. We only need to open our eyes and take a look. ‘Our eyes’ means ‘our minds’. The mind is that big thing on top of our necks inside of our heads, and it has a function called ‘thinking’.

Just last year, I was taken from my village in Egypt to spend some time in Spain, because I wrote a short story and won a prize. There, I noticed that I was walking around with a belief in the cleanliness and accuracy of everything. I was drinking tap water believing it was so pure and clean, eating food as if it was coming from heaven, even after I got diarrhoea and had to take medicine. I believed that the medicine will cure me like magic. I had faith in absolutes and that meant that my mind was dysfunctional.

Now, that was a very small example of what is happening on a world wide scale that hurts us more than diarrhoea.

A few rich people benefit from the natural resources of the majority of human race, and they don’t have to kill you for it. They only have to turn off your thinking machine, and then not only will you let them take your life, but you’ll also fight for them against those who work to free you. I know Egyptians who are poor and sick and ready to sacrifice their lives and their children’s lives to help those who abuse them last richer and more powerful for longer, under absolute beliefs like religion, just as the Muslim Brotherhood members do every Friday while their leaders ‘perform’ the American agenda.

Now, I know this sounds so complicated and mysterious, and that you are really enjoying the peaceful and secure feeling of the absolute beliefs, but in fact, you really need to suspect and think through every claim and cause, not so much the new ones, but the old ones, for those are the most dangerous.

A golden rule for all of us: welcome every idea however strange it seems as long as it doesn’t claim to be the absolute good, as soon as it doesn’t refuse differences, and let go of every idea that shuts the door for creation and progress.

Open Our Eyes in Afghanistan

Even from kindergarten, my ‘inner’ eye was being blinded to alternative ways of learning other than a test-based approach. Unconsciously, I was motivated to believe, “This is education – reading and writing the English and Chinese alphabet well enough to be some ‘meritocratic’ top student.”

Many decades later, during a three-month peace workshop at Bamiyan University, the student participants identified illiteracy as one of the main reasons for the chronic wars in Afghanistan. My awareness had revolutionized, so I disagreed and offered, “The unlettered Afghan shepherd is usually enraptured by care for his sheep. He does not sit on councils to pen justifications for expending blood and money to wage wars. His illiteracy does not cause wars.”

Asad ( not his real  name ) had become a young journalist, certainly literate, and educated, by conventional definitions. At a meeting of the showcase ‘Afghan Youth Parliament of Bamiyan Province’, this Hazara, wearing tinted glasses and a Western success-style coat, had concluded, “The Taliban are mainly Pashtun. If I took power someday, I will eliminate them.”

These days, think tanks, and these not even military think tanks, will praise this ‘realistic’ strategy, perhaps even recruit Asad. Asad’s eyebrows were contorted with prejudice and anger. His breath seemed to be puffs from ‘fighter jets’. The war will rage on in his personal and social life, along with the academic degrees he’ll frame and display is his bright-future office.

If I were an angel, I would have let in as much sunlight into that meeting room as possible, encouraged him to ease his frown, and enrolled him in a visionary kindergarten, where, after 5 minutes of “A,B,C” and” آ, ب , پ”   , I would introduce him to a 5 year old Pashtun boy, and suggest, “Go out to the park together for the next 50 minutes. Look and listen attentively without alphabets distracting your minds, so as to understand how many different kinds of insects and birds there are and to appreciate their songs. Study how the snow leopard is endangered even though it won’t make you a high-dollar earning oil-driller, mineral-extracting corporatist, or the first financial derivatives trader in Afghanistan.”

“Remove the adult tinted glasses, and open your eyes.”

Hakim, ( Dr Teck Young, Wee ) is a medical doctor from Singapore who has done humanitarian and social enterprise work in Afghanistan for the past 9 years, including being a mentor to the Afghan Peace Volunteers, an inter-ethnic group of young Afghans dedicated to building non-violent alternatives to war. He is the 2012 recipient of the International Pfeffer Peace Prize.

Donate
By Rise Up TimesPublished On: December 8th, 2013Comments Off on Kathy Kelly: Open Our Eyes