(See also article below from Fight Back! News)

ST. PAUL, Minn. — An attorney for two anti-war activists whose Minneapolis homes were raided by the FBI three years ago as part of an investigation that has not yet yielded criminal charges asked a federal judge on Friday to unseal the documents that prompted the searches and end the secrecy.

Jess Sundin and Mick Kelly are among 23 political activists in Minneapolis, Chicago and Grand Rapids, Mich., whose homes were searched in late 2010. At the time of the raid, search warrants obtained by The Associated Press indicated federal investigators were looking for connections between the activists and radical groups in Colombia and the Middle East.

“There is a public interest … in knowing the government’s basis for targeting these homes three years ago,” said Bruce Nestor, attorney for Sundin and Kelly. He added that the searches placed his clients under undue suspicion.

But prosecutors said Friday there is a compelling interest to keep the search warrant affidavit sealed for now because the investigation continues.

Assistant U.S. Attorney Andrew Winter said “there will be a day” when the document becomes public, but he could not say whether anyone would be charged.

Documents like the affidavit are typically made public once charges are filed or after the statute of limitations runs out, which in this case is five years. They can also be made public if a time limit for keeping them sealed is put in place. In this case, a time limit was not specified.

U.S. Magistrate Judge Steven Rau told Nestor that public access to the documents is not an unfettered right, and it’s not uncommon for such documents to be under seal.

But Rau also said the larger issue is what to do about ongoing secret investigations, saying the government can’t always say it has a compelling reason to keep documents sealed simply because an investigation is underway.

Rau said Winter has 120 days to tell him — privately — about the nature of the investigation and what has happened since the searches. Rau will then decide whether the affidavit should be unsealed. [Italics WAMMToday]

While the FBI initially said authorities were seeking evidence related to activities concerning the material support of terrorism, authorities haven’t yet revealed the targets of the investigation or details. While many of the activists have been subpoenaed to appear before a grand jury in Illinois, none have testified.

The activists have denied contributing money to terrorist groups and say they have done nothing illegal.

The warrant for Kelly’s home sought evidence on travel he did as part of his work for the Freedom Road Socialist Organization and on travel to Colombia, the Palestinian territories, Jordan, Syria or Israel. Two groups — one in Chicago and one in New York — use the Freedom Road name after a 1999 split. The New York group has said it was not targeted.

The warrant for Sundin’s home was similar but included a slightly different list of groups.

Nestor said he believed the government conducted the raids in hopes of uncovering a conspiracy to help the Revolutionary Armed Forces of Colombia or the Popular Front for the Liberation of Palestine.

“The court should really ask: Is there really an ongoing investigation, or is the government embarrassed that the vast conspiracy … never materialized?” Nestor said.

Nestor said keeping the documents under seal sends a message that the government can raid the homes of political dissidents, never charge them and never explain why. He said the situation initially made his clients afraid to exercise their right to free speech.

“I understand your clients’ concern about this … but it hasn’t deterred them,” Rau said. 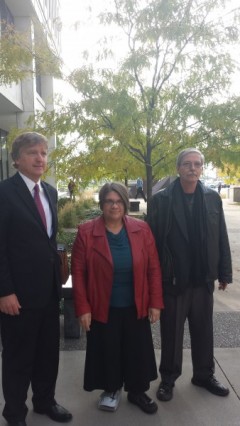 St. Paul, MN – Two prominent anti-war and international solidarity activists, Jess Sundin and Mick Kelly, were in federal court here, Nov. 1, in a bid to pull back the curtain of government secrecy that surrounds the FBI raids on their homes on Sept. 24, 2010. In the hearing presided over by Judge Steven E. Rau, Bruce Nestor, attorney for the plaintiffs, made a passionate argument for a motion to unseal the affidavits used to obtain the search warrants for the FBI raids.

Nestor told the court that the government cannot raid the homes of political activists without providing an explanation. He also spoke of the chilling effect the raids had on those exercising their First Amendment rights.

The Sept. 24, 2010 FBI raids struck seven homes in Minneapolis and Chicago and the office of the Twin Cities Anti-War Committee. A total of 23 activists were summoned to a Chicago grand jury investigating “material support for terrorism.” No one testified.

At the Nov. 1 hearing, Assistant U.S. Attorney Andrew Winter cited the ongoing investigation into the anti-war and Palestine solidarity activists as the “compelling government interest” in continuing to keep the documents under seal. Judge Rau stated that he will hold a closed ‘in camera’ hearing with Assistant U.S. Attorney Winter in 120 days, where Winter will report on the status and scope of the investigation. After that the judge will make periodic reviews (possibly every 90 days) of the order to keep the documents sealed.

Commenting on the Nov. 1 proceedings, Jess Sundin stated, “I came to court today hoping to hear that the investigation of myself and fellow activists was coming to a close and that the veil of secrecy and suspicion around us would be lifted. Instead, the government said the investigation is ongoing. While Assistant U.S. Attorney Winter didn’t openly threaten indictments, he expressed that things could develop in our case any day. Given that the government is fighting to keep its secrets hidden, I think he was saying that one or more indictments may still be coming. Or perhaps he expects the investigation will widen, and other activists will be caught up in this shameful witch hunt.”

Sundin continued, “I left the courtroom with a sense of foreboding. We need to be prepared, in the event of indictments, possibly within the next few months. We need to defend others who are persecuted for their political ideas or who they are – such as Chicago’s Palestinian community leader Rasmea Odeh. Three years ago, many of us made arrangements for family members to put up their homes, in the event that we would need to make bail. It was a sobering moment after court today, when we were reminded that all of these preparations should be reviewed again today.”

Sundin and Kelly have long spoken out against U.S. wars and in support of oppressed people. Mick Kelly said, “This case is all about criminalizing those of us who stand with the struggles in Palestine and Colombia, those of us who work against U.S. wars. There is no doubt that the affidavits used to obtain the search warrants on our homes are full of lies and are an attack on protected political activity. We want to drag them into the light of day.”

Donate
By Rise Up TimesPublished On: November 2nd, 2013Comments Off on Minnesota anti-war activists ask judge to unseal FBI documents that led to 2010 searches