The emperor has no clothes.
The fact that anyone older than 3 years old really believes that something this big is “stealth” and can sneak up on the Chinese has those war contractors laughing all the way to the bank.
Thank you for the vigil, bearing witness to this visible manifestation of insanity.
Carol 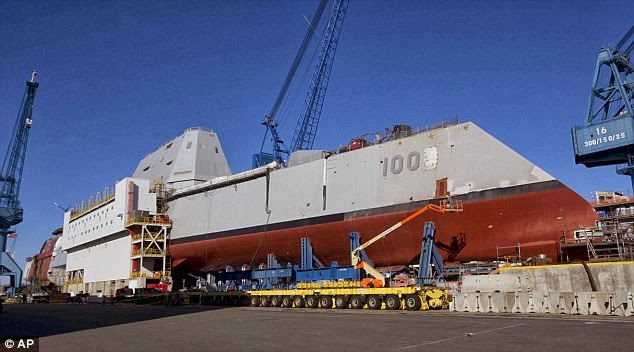 The first ever Zumwalt “stealth” destroyer built at
Bath Iron Works
I learned today that the new “stealth” destroyer made here in Bath will be put into the water on this Friday, Oct 25.  I am going to put together a vigil on Washington St in front of the BIW administration office from 3:00 – 4:30 pm.  All are invited to join me.This warship will be used to sneak up along China’s coast because it will supposedly be able to evade radar detection.  There can be no doubt that its primary mission is not defense, but instead is a key tool in the Pentagon’s first-strike planning.
The Associated Press has reported,  “A super-stealthy destroyer that could underpin the U.S. Navy’s China strategy will be able to sneak up on coastlines virtually undetected and pound targets with electromagnetic ‘rail guns’ right out of a sci-fi movie.  Using electric pulses, not chemical explosives, the ‘rail gun’ can shoot a 40-pound metal slug from New York to Philadelphia at up to 5,600 mph — more than seven times the speed of sound — with 32 times the force of a car traveling at 100 miles per hour.”
The new stealthy DDG-1000 being built by General Dynamics in Bath will cost between $4-7 billion each.  The Navy did not actually want the destroyer because it would eat up too much of their shipbuilding budget.  But Obama, who was strongly supported in his run for president in 2008 by the Chicago-based Crown family (which are majority stockholders in General Dynamics), has insisted the ships be built.Almost every major defense contractor (including Lockheed Martin, Raytheon, General Dynamics, Northrop Grumman Sperry Marine, L-3 Communications) and subcontractors from nearly every state in the U.S. are involved to some extent in this project, which is the largest single line item in the Navy’s budget.
Previous versions of Navy destroyers, outfitted with ‘missile defense’ systems cost about  $1.5 billion each.

Donate
By Rise Up TimesPublished On: October 25th, 20131 Comment