On August 27th [there was a celebration] at the Kellogg House in St. Paul.  Meanwhile, in Illinois, an award ceremony is planned for the winners of the first annual essay contest dedicated to the question “How Can We Obey the Law Against War?”  But why shouldn’t there be celebrations everywhere?

A petition that can be signed at rootsaction.org and used in your area for local lobbying. The wording is listed below.

By davidswanson – Posted on 15 August 2013  davidswanson.org
When I wrote When the World Outlawed War, I was struck by the significance of a forgotten day, a day matching the description in the 1950 folk song that begins “Last night I had the strangest dream . . . ”  On this day, August 27, 1928, the major nations of the world sent representatives to a room in Paris, France, in which they signed a treaty banning war and committing to the peaceful settlement of all disputes.
The treaty they signed, which is still on the books, has been used over the decades to prevent wars, end wars, and prosecute war makers.  The Peace Pact is listed as in force on the U.S. State Department website (open the document, scroll to page 454). But, unlike a corporate trade agreement, the Kellogg-Briand Pact is, shall we say, less than strictly adhered to — or even remembered.
Few people strolling down Kellogg Boulevard in St. Paul, Minnesota, have any idea that it’s named for Frank Kellogg or who he was.
They’re about to find out. 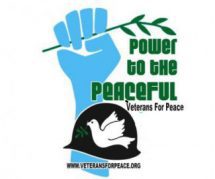 At 3:30 p.m. on Wednesday, August 21, a resolution will be introduced and voted on by the St. Paul City Council.  This resolution is being brought forward by Council member David Thune for the purpose of proclaiming August 27, 2013, to be “Kellogg-Briand Peace Pact Day” in celebration of the 85th anniversary of the signing.
Council member Dave Thune’s ward includes Kellogg’s former house.  Thune will be introducing the proclamation at the request of St. Paul residents, including members of the Minneapolis-St. Paul chapter of Veterans For Peace. The Kellogg-Briand Pact  “renounces war as an instrument of National Policy” which is the exact wording found in the (more recently created) Statement of Purpose of Veterans For Peace.
Here is the resolution that is being introduced:

Whereas Frank Billings Kellogg has rightly been honored around the world, including with a Nobel Peace Prize presented to him in 1930,
Whereas Frank Kellogg is honored in the National Cathedral in Washington, D.C., where his ashes lie, and where the Kellogg window in the Kellogg Bay bears these words: “In grateful memory of Frank Billings Kellogg, LL.D., 1856-1937, Senator of the United States from Minnesota, Ambassador to the Court of St. James, Secretary of State, a Judge of the Permanent Court of International Justice, Joint Author of the Kellogg-Briand Pact, in Fidelity to American Ideals he served his nation with conspicuous ability and sought equity and peace among the nations of the world, his body rests in this cathedral,”
Whereas Frank Kellogg’s family moved to Minnesota in 1865 and Kellogg moved to St. Paul in 1886, and Kellogg’s home from 1899 to 1937 was the house at 633 Fairmont Avenue in St. Paul, Minnesota, which is now a National Historic Landmark,
Whereas Frank Kellogg’s name is remembered in St. Paul as the name of Kellogg Boulevard, but memory of what Kellogg did to merit such honors is fading,
Whereas Frank Kellogg as U.S. Secretary of State heeded the passionate and almost universal desire of the people of this and other nations for peace, and in particular the proposal of the Outlawry Movement to legally ban war,
Whereas Frank Kellogg surprised his State Department staff and many others in 1927 by working carefully and diligently to bring many of the world’s nations together to ban war,
Whereas war had not previously been a crime, and the Kellogg-Briand Pact made it one, resulting in a nearly complete end to the legal recognition of territorial gains made through war, and resulting in the prosecution following World War II of the new crime of making war,
Whereas the wealthy well-armed nations of the world have not gone to war with each other since those prosecutions — the elimination of war upon and among the world’s poorer nations remaining an important goal toward which greater recognition of the Kellogg-Briand Pact might contribute,
Whereas the Kellogg-Briand Pact is recognized as in force by the U.S. State Department with 84 nations currently parties to it, and the pact open to any other nations that choose to join,
Whereas the Pact, excluding formalities and procedural matters, reads in full, “The High Contracting Parties solemly [sic] declare in the names of their respective peoples that they condemn recourse to war for the solution of international controversies, and renounce it, as an instrument of national policy in their relations with one another.  The High Contracting Parties agree that settlement or solution of all disputes or conflicts of whatever nature or whatever origin they may be, which may arise among them, shall never be sought except by pacific means,”
Whereas compliance with the law is more likely to occur if we remember what the law is,
Whereas then French Foreign Minister Aristide Briand remarked at the signing of the Kellogg-Briand Pact on August 27, 1928: “For the first time, on a scale as absolute as it is vast, a treaty has been truly devoted to the very establishment of peace, and has laid down laws that are new and free from all political considerations.  Such a treaty means a beginning and not an end. . . . [S]elfish and willful war which has been regarded from of old as springing from divine right, and has remained in international ethics as an attribute of sovereignty, has been at last deprived by law of what constituted its most serious danger, its legitimacy.  For the future, branded with illegality, it is by mutual accord truly and regularly outlawed so that a culprit must indur the unconditional condemnation and probably the hostility of all his co-signatories,”
Therefore, in hopes of encouraging awareness of the work of Frank Kellogg and of the peace movement of the 1920s that moved him to action, the City of St. Paul, Minnesota, proclaims August 27th to be Kellogg-Briand Peace Pact Day.

On August 27th a celebration is planned at the Kellogg House in St. Paul.  Meanwhile, in Illinois, an award ceremony is planned for the winners of the first annual essay contest dedicated to the question “How Can We Obey the Law Against War?”  But why shouldn’t there be celebrations everywhere?
Why not recognition for Salmon Oliver Levinson of Chicago, whose movement persuaded Kellogg to act?  Why not remembrance of Kellogg in Washington, D.C., where he’s buried?  Why not celebration of the activists of the 1920s who made up the Outlawry Movement, and who were from every part of the United States and many other nations?  Why not a day of celebrating peace and advancing the cause of the abolition of war, including by collectively urging new nations to sign onto the Peace Pact?
Here’s a petition that can be signed at rootsaction.org and the signatures from any town or state printed out to be used in local lobbying.  St. Paul is leading the way, but it need not do so alone.
The petition reads:

We support local, state, national, and international legislation that would make August 27th a holiday in honor of the Kellogg-Briand Pact, also known as the Peace Pact, that was signed on this date in 1928. The International Pact which renounced war as an instrument of national policy and committed nations to settling disputes exclusively by peaceful means was passed into U.S. law in 1929 with only one Senator in opposition. The co-authors were Republican Secretary of State Frank Kellogg from Minnesota and French foreign minister Aristide Briand. Kellogg won the Nobel Peace Prize, and the Pact is still U.S. and International Law.

Donate
By Rise Up TimesPublished On: August 20th, 2013Comments Off on David Swanson> A New Holiday Is Being Created for Peace