“Why, in April 2005, did you approve 13 harsh interrogation tactics, including waterboarding and up to 180 hours of sleep deprivation, for use on suspects by officers of the C.I.A.?” 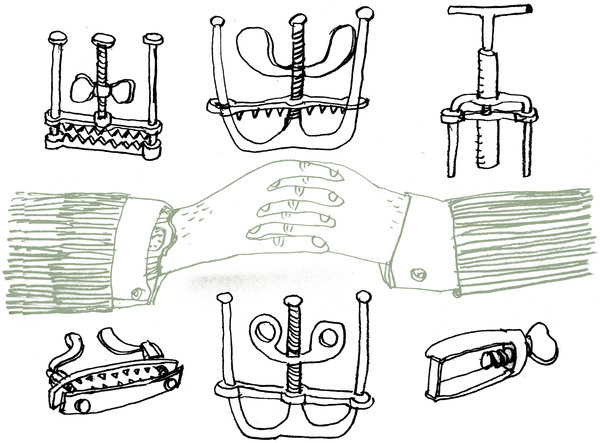 APPLE VALLEY, Minn. — WHEN President Obama nominated James B. Comey to lead the F.B.I., he lauded Mr. Comey as someone who understands the challenge of “striking a balance” between security and privacy, and had been “prepared to give up a job he loved rather than be part of something he felt was fundamentally wrong.”
High praise, but was it deserved? We may find out today, when the Senate Judiciary Committee holds a hearing on his confirmation.
Mr. Comey’s reputation for courage and probity rests largely on a dramatic episode in March 2004 when he and the current F.B.I. director, Robert S. Mueller III, tried to squelch the George W. Bush administration’s warrantless wiretapping program. But that was just one night in the 20 months that Mr. Comey served as deputy attorney general.
And while it was not the only time he expressed reservations, Mr. Comey apparently did eventually sign off on most of the worst of the Bush administration’s legal abuses and questionable interpretations of federal and international law. He ultimately approved the C.I.A.’s list of “enhanced interrogation” techniques, including waterboarding, which experts on international law consider a form of torture. He defended holding an American citizen, Jose Padilla, without charges for more than three years as an “enemy combatant,” and subjecting him to interrogation without counsel to obtain information from him. (Mr. Padilla was ultimately convicted of terrorism charges in civilian court.)
Mr. Mueller and Mr. Comey famously thwarted efforts by two Bush officials, Alberto R. Gonzales and Andrew H. Card Jr., to pressure a hospitalized Attorney General John Ashcroft to sign off on Mr. Bush’s warrantless monitoring order after the Justice Department found it illegal. But within days, Mr. Mueller and Mr. Comey, having threatened to resign, spoke with Mr. Bush. Whatever assurances the president may have given them are not (and may never be) known — but we know that the surveillance program continued, perhaps with modification, and certainly without further public dissent from Mr. Mueller and Mr. Comey.

I suggest that the senators ask Mr. Comey these questions:
1. Will you maintain the F.B.I. ban on torture and coercing of statements and confessions? Would you instruct F.B.I. agents to investigate all credible reports, including those involving other federal personnel, of violations of Sections 2340 and 2441 of Title 18 of the United States Code, which define torture and war crimes? (In 2002, according to a Justice Department report, F.B.I. agents at Guantánamo Bay created a “war crimes file” to document accusations of prisoner mistreatment by American military personnel, but an F.B.I. official ordered that the file be closed in 2003.)
2. In March 2004, you argued that the N.S.A. surveillance program was illegal. Do you still believe that the domestic communications of American citizens can be legally monitored by the government only with a judicially approved warrant? If so, what assurances about the warrantless surveillance scheme did Mr. Bush offer that persuaded you to stop opposing the program?
3. Do you stand by your statement, made at a Justice Department news conference in June 2004, that it was right to hold Jose Padilla, an American citizen who was arrested on American soil, in a military brig (for two years at that point) without charges?
4. Why, in April 2005, did you approve 13 harsh interrogation tactics, including waterboarding and up to 180 hours of sleep deprivation, for use on suspects by officers of the C.I.A.?
5. Do you stand by a speech in March 2009 in which you spoke of the need to “incapacitate” terrorists who could not be prosecuted, either because of a lack of sufficient evidence or because the information had been secretly provided by a foreign country? Do you believe that since procedures exist for “preventative detention” of people with dangerous mental illness, there should be a similar way to detain terrorism suspects without trial?
6. Do you believe there is a trade-off between civil liberties and national security, or do you think, as Mr. Obama stated when he ran for president, that this is a false choice? Where do you believe the balance between privacy and safety can be found, when the government has ready access to vast amounts of data collected by communications companies?
7. The N.S.A.’s data-mining operations seem to be sweeping up information involving foreigners and American citizens alike. How can we preserve the distinction between “non-U.S. persons” abroad, on whom officials have virtually unlimited authority to conduct surveillance, and “U.S. persons” inside our borders, on whom they lack authority to conduct warrantless surveillance?
8. Can you explain why the F.B.I. has submitted requests to the Foreign Intelligence Surveillance Court for phone call data, even though the data is to be directly furnished to the N.S.A.? How does the F.B.I. follow up on such requests to ensure that the N.S.A. is protecting the rights of American citizens?
9. Are the N.S.A.’s data-gathering efforts, disclosed in recent weeks, an outgrowth of Mr. Bush’s earlier warrantless surveillance program, to which you objected? Do they relate to the “Total Information Awareness” scheme proposed by John M. Poindexter, a retired admiral and former aide to Ronald Reagan, that was terminated after it was made public in 2002?
10. Do you believe that the F.B.I., in investigating a leak of classified information, was right in 2010 to call James Rosen, a Fox News reporter, a potential “co-conspirator”?
11. Officials say that great national harm will result from the disclosure of secret activities that are legally questionable. What do you think of this proposed remedy: The government should abide by international law and refrain from infringing on the rights of American citizens in the first place?

Coleen Rowley, a special agent for the F.B.I. from 1981 to 2004, testified before Congress about the F.B.I.’s failure to help prevent the 9/11 attacks. Coleen is a member of the board of Women Against Military Madness.

A version of this op-ed appeared in print on July 9, 2013, on page A21 of the New York editionwith the headline: Questions for the F.B.I. Nominee.

Readers shared their thoughts on this article.

Donate
By Rise Up TimesPublished On: July 9th, 20131 Comment