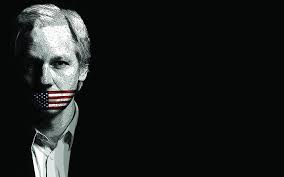 WASHINGTON — The U.S. media made themselves vulnerable to attack by the Department of Justice by standing aside as WikiLeaks and Army Pfc. Bradley Manning were targeted several years ago, Julian Assange told The Huffington Post in an interview from the Ecuadorian Embassy in London, where he is holed up fighting extradition to Sweden.
“All rights are fought for and maintained,” the WikiLeaks founder said. “As soon as organizations or people stop demanding that their rights be protected, then they are overrun and the current situation results.”
Ecuador has offered Assange political asylum, but Britain is threatening to arrest him once he leaves the embassy grounds.
Michael Ratner, Assange’s U.S. lawyer and the president of the Center for Constitutional Rights, noted the parallels between the case against Fox News reporter James Rosen and Assange, both of whom have been accused of soliciting classified information by the U.S. government.
“That began with Julian Assange and the claim that he was not a publisher, but he was soliciting and all that. It’s really the old story of standing up at the right time for Julian, which a lot of mainstream press did not. And of course, now it’s visiting home,” Ratner said.

Assange said that the decision to charge Manning with aiding the enemy — a charge that the Army private is now fighting in a military court trial — should be a “wake-up call” to the U.S. media.
“It is a disgrace to charge [Manning with] communicating with the enemy and to make it a capital offense — to threaten to either kill him or make him spend life in prison. The prosecution has refused to drop that charge. The reason that charge is there, and it should be a wake-up to all U.S. journalists and publishers, is to establish a precedent,” said Assange.
“The precedent works like this: If you communicate with a journalist, then you communicate with a publisher, then you communicate with the public, then you communicate with al Qaeda — so you communicate with enemies of the United States, and as a result your communications with a journalist must be punished by death or life imprisonment. If tolerated, that will lead to regimes where every U.S. government source, when speaking to a journalist, must be concerned that they will suffer either the death penalty or life imprisonment as a result. Now having established that, the U.S. government will have set the precedent that not only is the[source][/source] indirectly communicating with al Qaeda by communicating with the public, but the publisher and the journalist is as well. And therefore the publisher and the journalist can be embroiled in espionage charges, some of which similarly carry the death penalty,” Assange said.
In the Manning case, the prosecution has said it will not seek the death penalty. He still faces a maximum sentence of life without parole.
The Department of Justice is currently under fire for a sweeping subpoena of Associated Press phone records and for labeling Rosen, in a separate subpoena, a potential co-conspirator for seeking out classified information.
“It’s a worrying trend, but we weren’t surprised. [Attorney General] Eric Holder and the DOJ have been conducting precisely that investigation against us for two and a half years,” Assange said. “Our advice [to the mainstream media] has been what it always was. First of all, hold the line, as journalist organizations must stand up to protect their rights.”
Assange noted that “The New York Times didn’t even bother to send a reporter” to cover certain pretrial proceedings on the abusive conditions in which Manning was kept after he was arrested, though he had leaked information that led to blockbuster New York Times reports. “There have been a great many people who have benefited from the release of the diplomatic cables and other materials, including The New York Times,” Assange said.
Among the secret files that Manning released was a video showing a U.S. helicopter air strike that kills unarmed men and children in Iraq. The footage, taken from one helicopter, records the shooters celebrating over the “dead bastards” and firing at a father and son who come to the scene to tend to the wounded, killing them both. Manning also released thousands of documents giving a fuller picture of the wars in Iraq and Afghanistan, as well as the practice of U.S. diplomacy abroad.
“It can only be described as a show trial. The prosecution has vigorously fought to exclude all evidence as to motives, and all evidence as to outcomes,” Assange said. “No one was harmed as a result of the publications.”
“The case is a sledgehammer,” he added. “It is there to try and terrorize anyone else into [not] being a force for the media by trying to terrorize this young man.”