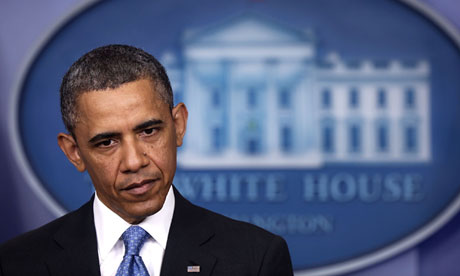 Due to the controversies over the IRS and (especially) the DOJ’s attack on AP’s news gathering process, media outlets have suddenly decided that President Obama has a very poor record on civil liberties, transparency, press freedoms, and a whole variety of other issues on which he based his first campaign. The first two paragraphs of this Washington Post article from yesterday, expressed in tones of recent epiphany, made me laugh audibly:

“President Obama, a former constitutional law lecturer who came to office pledging renewed respect for civil liberties, is today running an administration at odds with his résumé and preelection promises.
“The Justice Department’s collection of journalists’ phone records and the Internal Revenue Service’s targeting of conservative groups have challenged Obama’s credibility as a champion of civil liberties – and as a president who would heal the country from damage done by his predecessor.”

You don’t say! The Washington Post’s breaking news here is only about four years late. Back in mid-2010, ACLU executive director Anthony Romero, speaking about Obama’s civil liberties record at a progressive conference, put it this way: “I’m disgusted with this president.” In the spirit of optimism, one can adopt a “better-late-than-never” outlook regarding this newfound media awakening.
Subscribe or “Follow” us on WAMMToday.org. For the TC EVENTS calendar and the ACTIONS AND ACTION ALERTS click on the tab at the top of the page and click on the item of interest to view. WAMMToday is also on FACEBOOK! Check the WAMMToday page for posts from this blog and more! “Like” our page today.  Find us on TWITTER at WAMMToday (@touchpeace).
As a result of the last week, there is an undeniable and quite substantial sea change in how the establishment media is thinking and speaking about Obama. The ultimate purveyors of Beltway media conventional wisdom (CW), Politico’s Mike Allen and Jim Vandehei, published an article yesterday headlined “DC turns on Obama”, writing that “the town is turning on President Obama – and this is very bad news for this White House” and “reporters are tripping over themselves to condemn lies, bullying and shadiness in the Obama administration.” The Washington Post’s political reporter, Dan Balz, another CW bellwether, wrote that these controversies “reflect questions about the administration that predate the revelations of the past few days”.  About the AP story, Balz wrote that “no one can recall anything as far-reaching as what the Justice Department apparently did in secretly gathering information about the work of AP journalists.”
This morning, the New York Times’ public editor Margaret Sullivan wrote about the AP story and the broader War on Whistleblowers, and said that Obama’s presidency is “turning out to be the administration of unprecedented secrecy and of unprecedented attacks on a free press.” She added:

This isn’t just about press rights. It’s about the right of citizens to know what their government is doing. In an atmosphere of secrecy and punishment – despite the hollow promises of transparency – that’s getting harder every day.”

The New York Times itself editorialized today that “the Obama administration, which has a chilling zeal for investigating leaks and prosecuting leakers, has failed to offer a credible justification” for its “spying on the AP”; the NYT editors also quoted a letter from the Reporters Committee for Freedom of the Press to Attorney General Holder stating that the AP spying “calls into question the very integrity” of the administration’s policy toward the press. The New Yorker this morning published an article by its general counsel, Lynn Oberlander, denouncing the DOJ’s conduct as “cowardly”; she wrote: “Even beyond the outrageous and overreaching action against the journalists, this is a blatant attempt to avoid the oversight function of the courts.” Former New York Times general counsel James Goodale, who represented the paper during its Pentagon Papers fight with the Nixon administration, said in an interview yesterday that Obama is worse than Nixon when it comes to press freedoms.
Those are all media venues generally sympathetic to and supportive of Obama. But this anger has infected even the most Obama-loyal circles. Journalist Jonathan Alter, who has literally written books using what he touts as his “unmatched access” that are paens to Obama’s greatness and Goodness, yesterday demanded: “Obama should simply apologize to the AP and its reporters. It’s the least he can do to show he still believes in the First Amendment.” Even at MSNBC, its most influential host, Rachel Maddow, broadcast a 20-minute segment vehemently condemning the Obama DOJ on the AP matter that featured an interview with an AP lawyer and used Nixon’s attacks on Pentagon Papers leaker Daniel Ellsberg as the historical context. Maddow then broadcast another segment on the IRS’ targeting of right-wing groups in which she correctly pointed out that there is no evidence of Obama’s personal role in that targeting but that it will create serious problems for his administration. Even Harry Reid – the Senate’s top Democrat –denounced the DOJ’s actions as “inexcusable”, saying “there is no way to justify this.”
There are two significant points to make from these events. First, it is remarkable how media reactions to civil liberties assaults are shaped almost entirely by who the victims are. For years, the Obama administration has been engaged in pervasive spying on American Muslim communities and dissident groups. It demanded a reform-free renewal of the Patriot Act and the Fisa Amendments Act of 2008, both of which codify immense powers of warrantless eavesdropping, including ones that can be used against journalists. It has prosecuted double the number of whistleblowers under espionage statutes as all previous administrations combined, threatened to criminalize WikiLeaks, and abused Bradley Manning to the point that a formal UN investigation denounced his treatment as “cruel and inhuman”.
But, with a few noble exceptions, most major media outlets said little about any of this, except in those cases when they supported it. It took a direct and blatant attack on them for them to really get worked up, denounce these assaults, and acknowledge this administration’s true character. That is redolent of how the general public reacted with rage over privacy invasionsonly when new TSA airport searches targeted not just Muslims but themselves: what they perceive as “regular Americans”. Or how former Democratic Rep. Jane Harman – once the most vocal defender of Bush’s vast warrantless eavesdropping programs – suddenly began sounding like a shrill and outraged privacy advocate once it was revealed that her own conversations with Aipac representatives were recorded by the government.
Leave to the side how morally grotesque it is to oppose rights assaults only when they affect you. The pragmatic point is that it is vital to oppose such assaults in the first instance no matter who is targeted because such assaults, when unopposed, become institutionalized. Once that happens, they are impossible to stop when – as inevitably occurs – they expand beyond the group originally targeted. We should have been seeing this type of media outrage over the last four years as the Obama administration targeted non-media groups with these kinds of abuses (to say nothing of the conduct of the Bush administration before that). It shouldn’t take an attack on media outlets for them to start caring this much.
Second, we yet again see one of the most significant aspects of the Obama legacy: the way in which it has transformed and degraded so many progressive precincts. Almost nobody is defending the DOJ’s breathtaking targeting of AP, and with good reason: as the Reporters Committee for Freedom of the Press made clear yesterday, it’s unprecedented:

“In the thirty years since the Department issued guidelines governing its subpoena practice as it relates to phone records from journalists, none of us can remember an instance where such an overreaching dragnet for news gathering materials was deployed by the Department, particularly without notice to the affected reporters or an opportunity to seek judicial review.”

But there are a few people excusing or outright defending the DOJ here: namely, some progressive blogs and media outlets. They are about the only ones willing to defend this sweeping attempt to get the phone records of AP journalists.
As I noted yesterday, TPM’s Josh Marshall – who fancies himself an edgy insurgent against mainstream media complacency as he spends day after day defending the US government’s most powerful officials – printed an anonymous email accusing AP of engineering a “smear of Justice”. Worse, Media Matters this morning posted “talking points” designed to defend the DOJin the AP matter that easily could have come directly from the White House and which sounded like Alberto Gonzales, arguing that “if the press compromised active counter-terror operations for a story that only tipped off the terrorists, that sounds like it should be investigated” and that “it was not acceptable when the Bush Administration exposed Valerie Plame working undercover to stop terrorists from attacking us. It is not acceptable when anonymous sources do it either.” It also sought to blame Republicans for defeating a bill to protect journalists without mentioning that Obama, once he became president, reversed his position on such bills and helped to defeat it. Meanwhile, the only outright, spirited, unqualified defense of the DOJ’s conduct toward AP that I’ve seen comes from a Media Matters employee and “liberal” blogger.
During the Bush years, it was conservatives who supported the Bush DOJand Alberto Gonzales’ threats against the press on national security grounds; now, defenders of such threats to press freedoms are found almost exclusively from progressive circles (similarly, many of the most vicious and vocal attacks on WikiLeaks and Bradley Manning have come from progressives).
This is such an under-appreciated but crucial aspect of the Obama legacy. Recall back in 2008 that the CIA prepared a secret report (subsequently leaked to WikiLeaks) that presciently noted that the election of Barack Obama would be the most effective way to stem the tide of antiwar sentiment in western Europe, because it would put a pleasant, happy, progressive face on those wars and thus convert large numbers of Obama supporters from war opponents into war supporters. That, of course, is exactly what happened: not just in the realm of militarism but civil liberties and a whole variety of other issues. That has had the effect of transforming what were, just a few years ago, symbols of highly contentious right-wing radicalism into harmonious bipartisan consensus. That the most vocal defenders of this unprecedented government acquisition of journalists’ phone records comes from government-loyal progressives – reciting the standard slogans of National Security and Keeping Us Safe and The Terrorists – is a potent symbol indeed of this transformation.
RELATED
Justice Department’s pursuit of AP’s phone records is both extreme and dangerous | Glenn Greenwald May 14, 2013 Glenn Greenwald

Donate
By Rise Up TimesPublished On: May 16th, 20131 Comment