On Military Drones (and tearing them to pieces)

It’s the arms race of the future, really, except this time
Sputnik’s ganna be an unmanned plane.
And if the vessel is unmanned, doesn’t that make the killing
automatically inhumane? 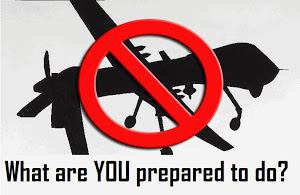 It’s odd to me to think that when I’m voting with my dollar,
I demand a better treatment of the chicken for my dinner
than our military seems to see fit for the people on the ground
in places like Iraq and Yemen, Afghanistan, or Pakistan…
You know, those unreliable statistics because really, who sees?
The trouble with machines is there’s a lack of accountability.
I want our government to have to make stickers for
all their little planes that say “No dolphins or civilians were
harmed in the making of this democracy.”
How about that?
How about a harm-free approach to foreign policy?
Can you install that, Uncle Sam,
at the point of your gun?
Of course not, it’s an oxymoron.
American. The humanitarian.
On a mission and it’s called an invasion.
Look up in the sky!
It’s a bird, it’s a plane-
cause it sure aint Super Man.
It’s a U.S. military drone, and it’s loaded
so go ahead and run
because it sees you too
but not with eyes,
with orders.
Cause anyway, that’s what “collateral damage” is
code for: Dead people- lots of them children.
“Unarmed civilians” is a way of saying that they had nothing to do
with this conflict, but then, neither do we on this end.
The taxed, yet, unrepresented majority of people in this country
who do not like this war, and do not support another one.
But what can we do?
We don’t feel the trigger under our finger because we are fed
a constant stream of lies, and all our lives we’re told that it’s
“Do unto others as you would have done unto yourself”
and yet every time the news breaks that a woman is raped,
that a village was slaughtered, we are ready to make those
sacrifices for what we call the safety of our country and it is
utter nonsense.
Violence begets violence.
This is a fundamental truth.
We are the purveyors of death and atrocity in these parts of the world
and then you wonder why they hate us  ???
So you tell me, who is the real terrorist?
Rebel with a gun or the smiling politician?
Whatever gets the job done, and these days
the job is as easily done as the push of a button by some
pimple faced kid in a bunker in Nevada, somewhere.
Did you know that the controls for these drones are compatible with
a Play Station? This is not a coincidence.
They are spoon-feeding this to your kids, so I suggest you get acquainted.
Because drones are the future of warfare that already is.
And I heard that Obama just Okayed the use of drones over
ALL U.S. air space within the next year, so be prepared
to see them around, equipped with cameras instead of bombs
So that should make us all feel safer. (big smile)
They say that they are looking for the terrorists among us
and looking at everyone- you know, just in case.
Even though the only cases it seems that our government team
can solve these days are the ones they cooked up in the first place.
But hey- they’ve gotta spend that budget some way, don’t they?
And did you know that it takes a whopping, jaw dropping, 300 people
to fully operate one of those drones for just one day?
One of those $28 million pilot-less planes???
Oh yes sir’ee, it’s a bombing industry.
Remember that bumper sticker about how great it’s be
if schools had all the funding they needed
and the army had to hold a bake sale?
People, this is what your government is busy buying.
This is where the tax dollars go.
So when they say they’ve gotta cut some spending
you just tell’em “Land some drones, man. Just land the drones.”
And call me a sentimental hippie like that
but I believe in the power of the people to fight back
because we can’t just let this technology run wild, or go rouge,
or come crashing home on us. We must realize and regulate,
man, we gotta study up and educate people before this whole thing
gets out of control (with evidence to suggest
that we are already at the threshold).
So, let your president and your members of congress know
what you think about these wars,
and what you think about the drones.
Tell’em we don’t need any more killing machines.
We could use those funds much better at home.
Why don’t you leave those kids in Pakistan alone.
It’s time to end the wars, and land the drones.

Misty Rowan is a Minneapolis poet and activist.  Her blog site is missteatree.com

April is national action against drones month.
See the full list of vigils, protests, lectures, and other actions that are part of the April Days nationwide.
#APRILDAYS ON TWITTER
As part of the April Days of Action Against Drones, anti-drones activists will be tweeting throughout the month, using the hashtags #AprilDays and #nodrones.
Read about how you can be part of the #ApilDays campaign on Twitter.

Donate
By Rise Up TimesPublished On: April 11th, 2013Comments Off on Misty Rowan> On Military Drones (and tearing them to pieces)