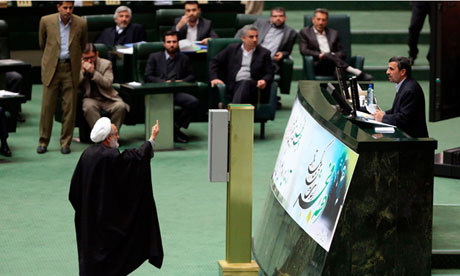 Mahmoud Ahmadinejad, Iran’s president, right, faces objections from MPs during a speech to the parliament in Tehran on 3 February.
Photograph: Atta Kenare/AFP/Getty Images

Flynt Leverett and Hillary Mann Leverett are two of the nation’s preeminent experts on all matters relating to Iran. They have also become the nation’s most unlikely yet compelling critics of US policy toward Tehran and particularly the misconceptions shaping political and media discourse in the west. What’s most amazing is that they come directly from the belly of the National Security State beast: they both were Middle East officials in the National Security Council and State Department during the Bush years, while he also worked as a CIA analyst and she for the US mission to the UN and as one of the few diplomats to directly negotiate with Tehran in the wake of the 9/11 attacks. With their top secret security clearances, they both had front-row seats to the run-up to the Iraq war from inside the US government.
They have now published an extraordinary new book entitled Going to Tehran: Why the United States Must Come to Terms with the Islamic Republic of Iran. No matter your views, it’s impossible to meaningfully participate in debates over these issues without understanding the facts they have assembled and perspectives they advocate. Exactly as happened with Iraq, there is a whole slew of highly dubious assumptions and narratives about Iran and the US’s relationship to it that are rarely challenged in any meaningful way in standard media circles. The Leveretts and “Going to Tehran” are vital to thinking critically about these claims.
I spoke with them for 30 minutes about Iran, their new book, and the criticisms to which they have been subjected, and that discussion can be heard below. They identify the most significant misconceptions about Iran that prevail in the west, analyze the inflammatory policies toward Iran from the Obama administration (and its true motives in the region), and discuss the lessons they learned from the Iraq war and how they apply to Iran. Hillary also recounts the key role played by Bill Clinton in bolstering the resolve of her then-boss, Condoleezza Rice, to wage war on Iraq. Just as happened in the run-up to the Iraq war – when even the most informed experts on that country were marginalized if they opposed the prevailing Beltway assumptions – the Leveretts, as they detail here, are now experiencing a similar marginalization process (I erroneously said in the introduction that Flynt is with the New American Foundation: he no longer is, but is instead now a professor at Pennsylvania State University’s School of International Affairs).
Both because of their expertise and their long immersion in these issues, they (and their data-filled book) deserve a prominent voice in all serious debates about Iran. They are very worth listening to. The 30-minute podcast can be heard on the player [on the Guardian website of the original posting] (or at this link)
Subscribe or “Follow” us on WAMMToday.org. For the TC EVENTS calendar and the ACTIONS AND ACTION ALERTS click on the tab at the top of the page and click on the item of interest to view. WAMMToday is also on FACEBOOK! Check the WAMMToday page for posts from this blog and more! “Like” our page today.  Find us on TWITTER at WAMMToday (@touchpeace).
Donate
By sueannmPublished On: April 10th, 2013Comments Off on Glenn Greenwald> Podcast discussion with two of America’s leading Iran experts: the Leveretts