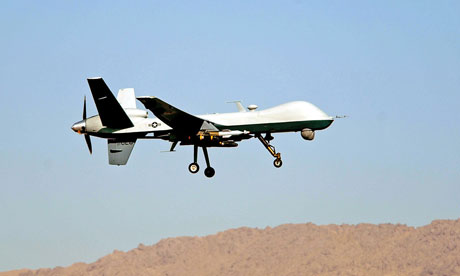 US Drone, Pakistan.  The use of unmanned robots to strike at suspected militants has risen sharply during the Obama administration. Photograph: James Lee Harper Jr/AFP/Getty Images

Military bases, universities and companies involved in Barack Obama‘sdrones programme are to be targeted in a month-long series of protests by activists keen to build on the renewed public focus over the president’s controversial policy.

Dubbed “April Days of Action” by participants, organisers are hoping to capitalise on a series of recent controversies that have thrust the use of drones – especially when it comes to targeted killings of suspected terrorists – into the heart of American political debate.

The protests will begin on April 3 with a rally in New York, followed by three days of protest outside the facilities of companies that make drones, including at San Diego-based General Atomics which makes Predator and Reaper drones.

Later in the month, protests will take place at universities and other institutions that conduct research into drones or help train drone pilots and operators. At the end of the month, rallies and demonstrations will target military bases in the US from where drones operate, including Hancock air base near Syracuse, New York.

“There is a tremendous amount of scepticism with the public about drone attacks in other countries. There is concern that innocent people are killed and enemies of the United States are being made,” said Nick Mottern, founder of Know Drones, an educational organization that is helping co-ordinate the protests. Over the month the cities targeted by the campaign will also include Washington DC, Atlanta, Philadelphia, Honolulu, San Francisco, Sacramento, Minneapolis, Des Moines and others.

The use of unmanned robots to strike at suspected Islamic militants abroad has risen sharply during the Obama administration. Its defenders say that it offers a precision way of hitting targets without the potentially disastrous deployment of US manpower abroad. But critics point out that drone strikes frequently cause civilian casualties, while the definition of a suspect is worryingly broad and the exact legal context of the programme is shrouded in secrecy.

The London-based Bureau of Investigative Journalism tracks drone casualties, and estimates that in Pakistan alone 366 strikes have killed up to 3,581 people, with 884 being innocent civilians. Of that total number of attacks, 314 have been ordered while Obama has been in office.

Protesters said they hoped the campaign would rally public anger. “There is no question that the April Days of Action will exhibit a level of anti-war and civil liberties activism that is unprecedented in recent years,” said Medea Benjamin, founder of veteran anti-war group Code Pink, whose members recently protested against the appointment of drones advocate John Brennan as the new head of the CIA.

But anger over drones is not limited to US liberals. One of the highest-profile critics of the drone programme is Kentucky senator Rand Paul, a rising star of the Republican right wing.

Paul recently launched a remarkable 13-hour filibuster effort against Brennan’s appointment. The bid failed, but it highlighted concerns over the legal implications of drone attacks that have killed American citizens and worries that the devices might be deployed for similar purposes on US soil.

Mottern said that the April Days protests would seek to push forward the debate in the wake of Paul’s action. “Most people here in the United States know a little bit about drones; we want everyone to begin to see the depth of the threat that drones present to all of us, regardless of what nation we live in,” he said.

Donate
By sueannmPublished On: March 28th, 2013Comments Off on Anti-drones activists plan month of protest over Obama’s ‘kill’ policy