From Wikipedia, the free encyclopedia

The Triangle Shirtwaist Factory fire in New York City on March 25, 1911, was the deadliest industrial disaster in the history of the city of New York and resulted in the fourth highest loss of life from an industrial accident in U.S. history. It was also the second deadliest disaster in New York City – after the burning of the General Slocum on June 15, 1904 – until thedestruction of the World Trade Center 90 years later. The fire caused the deaths of 146 garment workers, who died from the fire, smoke inhalation, or falling or jumping to their deaths. Most of the victims were recent Jewish and Italian immigrant women aged sixteen to twenty-three;[1][2][3] of the victims whose ages are known, the oldest victim was Providenza Panno at 43, and the youngest were 14-year-olds Kate Leone and “Sara” Rosaria Maltese.[4]
Because the managers had locked the doors to the stairwells and exits – a common practice at the time to prevent pilferage and unauthorized breaks[5] – many of the workers who could not escape the burning building jumped from the eighth, ninth, and tenth floors to the streets below. The fire led to legislation requiring improved factory safety standards and helped spur the growth of the International Ladies’ Garment Workers’ Union, which fought for better working conditions for sweatshop workers.
The factory was located in the Asch Building, at 23–29 Washington Place, now known as the Brown Building, which has been designated a National Historic Landmark and a New York City landmark.[6] 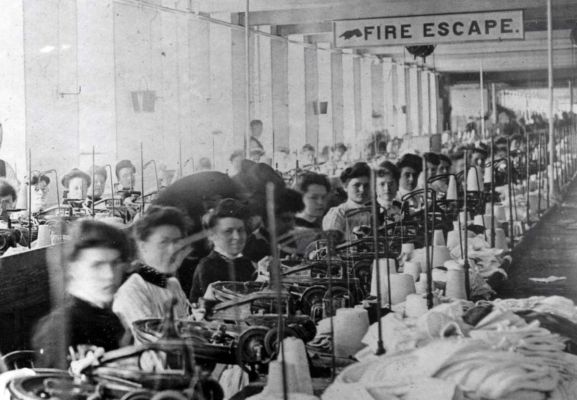 Two photos above added by WAMMToday.

Donate
By Rise Up TimesPublished On: March 25th, 20132 Comments