Bradley Manning: the face of heroism

The 25-year-old Army Private, this generation’s Daniel Ellsberg, pleads guilty today to some charges and explains his actions 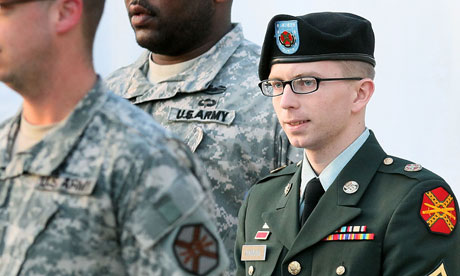 (updated [Friday])
In December, 2011, I wrote an Op-Ed in the Guardian arguing that ifBradley Manning did what he is accused of doing, then he is a consummate hero, and deserves a medal and our collective gratitude, not decades in prison. At his court-martial proceeding this afternoon in Fort Meade, Manning, as the Guaridan’s Ed Pilkington reports, pleaded guilty to having been the source of the most significant leaks toWikiLeaks. He also pleaded not guilty to 12 of the 22 counts, including the most serious – the capital offense of “aiding and abetting the enemy”, which could send him to prison for life – on the ground that nothing he did was intended to nor did it result in harm to US national security. The US government will now almost certainly proceed with its attempt to prosecute him on those remaining counts.
Manning’s heroism has long been established in my view, for the reasons I set forth in that Op-Ed. But this was bolstered today as he spoke for an hour in court about what he did and why, reading from a prepared 35-page statement. Wired’s Spencer Ackerman was there and reported:

“Manning’s motivations in leaking, he said, was to ‘spark a domestic debate of the role of the military and foreign policy in general’, he said, and ’cause society to reevaluate the need and even desire to engage in counterterrorism and counterinsurgency operations that ignore their effect on people who live in that environment every day.

‘”Manning explain[ed] his actions that drove him to disclose what he said he ‘believed, and still believe . . . are some of the most significant documents of our time’ . . . .”He came to view much of what the Army told him — and the public — to be false, such as the suggestion the military had destroyed a graphic video of an aerial assault in Iraq that killed civilians, or that WikiLeaks was a nefarious entity. . . .

“Manning said he often found himself frustrated by attempts to get his chain of command to investigate apparent abuses detailed in the documents Manning accessed. . . .”

Manning also said he “first approached three news outlets: the Washington Post, New York Times and Politico” before approaching WikiLeaks. And he repeatedly denied having been encouraged or pushed in any way by WikiLeaks to obtain and leak the documents, thus denying the US government a key part of its attempted prosecution of the whistleblowing group. Instead, “he said he took ‘full responsibility’ for a decision that will likely land him in prison for the next 20 years — and possibly the rest of his life.”
Subscribe or “Follow” us on riseuptimes.wordpress.com. For the TC EVENTS calendar and the ACTIONS AND ACTION ALERTS click on the tab at the top of the page and click on the item of interest to view. WAMMToday is also on Facebook! Check the WAMMToday page for posts from this blog and more! “Like” our page today.  Find us on twitter at WAMMToday (@touchpeace).
This is all consistent with what Manning is purported to have said in the chat logs with the government snitch who pretended to be a journalist and a pastor in order to assure him of confidentiality but then instead reported him. In those chats, Manning explained that he was leaking because he wanted the world to know what he had learned: “I want people to see the truth … regardless of who they are … because without information, you cannot make informed decisions as a public.” When asked by the informant why he did not sell the documents to a foreign government for profit – something he obviously could have done with ease – Manning replied that he wanted the information to be publicly known in order to trigger “worldwide discussion, debates, and reforms”. He described how he became deeply disillusioned with the Iraq War he had once thought noble, and this caused him to re-examine all of his prior assumptions about the US government. And he extensively narrated how he had learned of serious abuse and illegality while serving in the war – including detaining Iraqi citizens guilty of nothing other than criticizing the Malaki government – but was ignored when he brought those abuses to his superiors.
Manning is absolutely right when he said today that the documents he leaked “are some of the most significant documents of our time”. They revealed a multitude of previously secret crimes and acts of deceit and corruption by the world’s most powerful factions. Journalists and even some government officials have repeatedly concluded that any actual national security harm from his leaks is minimal if it exists at all. To this day, the documents Manning just admitted having leaked play a prominent role in the ability of journalists around the world to inform their readers about vital events. The leaks led to all sorts of journalism awards for WikiLeaks. Without question, Manning’s leaks produced more significant international news scoops in 2010 than those of every media outlet on the planet combined.
This was all achieved because a then-22-year-old Army Private knowingly risked his liberty in order to inform the world about what he learned. He endured treatment which the top UN torture investigator deemed “cruel and inhuman”, and he now faces decades in prison if not life. He knew exactly what he was risking, what he was likely subjecting himself to. But he made the choice to do it anyway because of the good he believed he could achieve, because of the evil that he believed needed urgently to be exposed and combated, and because of his conviction that only leaks enable the public to learn the truth about the bad acts their governments are doing in secret.
Heroism is a slippery and ambiguous concept. But whatever it means, it is embodied by Bradley Manning and the acts which he unflinchingly acknowledged today he chose to undertake. The combination of extreme government secrecy, a supine media (see the prior two columns), and a disgracefully subservient judiciary means that the only way we really learn about what our government does is when the Daniel Ellsbergs – and Bradley Mannings – of the world risk their own personal interest and liberty to alert us. Daniel Ellberg is now widely viewed as heroic and noble, and Bradley Manning (as Ellsberg himself has repeatedly said) merits that praise and gratitude every bit as much.

In the New Republic this morning, Harvard Law Professor Yochai Benkler has a superb article warning of the radical theories being used to prosecute Manning, entitled “The Dangerous Logic of the Bradley Manning Case”. Among other things, he explains that a conviction on the “aiding and abetting the enemy” charge “would dramatically elevate the threat to whistleblowers” and “the consequences for the ability of the press to perform its critical watchdog function in the national security arena will be dire”. That, of course, is precisely why the Obama administration is doing it. That’s the feature, not a bug. He concludes: “what a coup for Al Qaeda” that the US has obliterated its core freedoms under the pretense of national security.
Meanwhile, the outstanding independent journalist Alexa O’Brien was present at the court-martial proceeding and has created a transcript of Manning’s statement, here. Among other things, he describes his reaction when he first saw the video of the Apache helicopters in Baghdad shooting at journalists and then those who came to rescue them (“The most alarming aspect of the video to me, however, was the seemly delightful bloodlust they appeared to have. They dehumanized the individuals they were engaging and seemed to not value human life by referring to them as quote ‘dead bastards’ unquote and congratulating each other on the ability to kill in large numbers”). The US government, its media and other assorted apologists have tried to malign Manning as a reckless and emotionally unstable malcontent who could not possibly have read what he leaked or made an informed choice to do so. Just read what he says to understand how thoughtful, rational, and deliberate of an act this was: “The more I read, the more I was fascinated with the way that we dealt with other nations and organizations. I also began to think the documented backdoor deals and seemingly criminal activity that didn’t seem characteristic of the de facto leader of the free world. . . .The more I read the cables, the more I came to the conclusion that this was the type of information that should become public.”

Donate
By sueannmPublished On: March 2nd, 2013Comments Off on Glenn Greenwald> Bradley Manning: the face of heroism