Congress: End Endless War and Stop Becoming “the Evil That We Deplore”

[youtube http://www.youtube.com/watch?v=Nf1N-y9Mbo4&w=420&h=315]
Congress waited six years to repeal the Tonkin Gulf Resolution after it opened the bloody floodgates for the Vietnam War in August 1964.
If that seems slow, consider the continuing failure of Congress to repeal the “war on terror” resolution—the Authorization for Use of Military Force—that sailed through, with just one dissenting vote, three days after 9/11.
Prior to casting the only “no” vote, Congresswoman Barbara Lee spoke on the House floor. “As we act,” she said, “let us not become the evil that we deplore.” 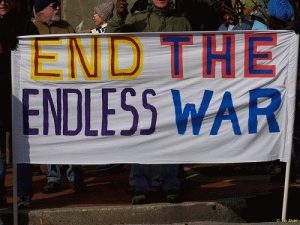 We have. That’s why, more than 11 years later, Lee’s prophetic one-minute speech is so painful to watch. The “war on terror” has inflicted carnage in Iraq, Afghanistan, Yemen and elsewhere as a matter of routine. Targets change, but the assumed prerogative to kill with impunity remains.
Now, Rep. Lee has introduced H.R. 198, a measure to repeal the Authorization for Use of Military Force. (This week, several thousand people have already used a RootsAction.org special webpage to email their Senators and House members about repealing that “authorization” for endless war.) Opposed to repeal, the Obama administration is pleased to keep claiming that the 137-month-old resolution justifies everything from on-the-ground troops in combat to drone strikes and kill lists to flagrant abrogation of civil liberties.
Subscribe or “Follow” us on riseuptimes.wordpress.com. For the TC EVENTS calendar and the ACTIONS AND ACTION ALERTS click on the tab at the top of the page and click on the item of interest to view. WAMMToday is also on Facebook! Check the WAMMToday page for posts from this blog and more! “Like” our page today.  Find us on twitter at WAMMToday (@touchpeace).
A steep uphill incline faces efforts to repeal the resolution that issued a blank political check for war in the early fall of 2001. Struggling to revoke it is a valuable undertaking. Yet even repeal would be unlikely to end the “war on terror.”
At the start of 1971, President Nixon felt compelled to sign a bill that included repeal of the Tonkin Gulf Resolution. By then, he had shifted his ostensible authority for continuing the war on Vietnam—asserting his prerogative as commander in chief. Leaders of the warfare state never lack for rationales when they want to keep making war.
In retrospect, the U.S. “war on terror” has turned out to be even more tenacious than the U.S. war that took several million lives in Vietnam, Laos and Cambodia during the 1960s and early 1970s.
Some key similarities resonate with current circumstances. Year after year, in Congress, support for the Vietnam War was bipartisan. Presidents Johnson and Nixon preached against unauthorized violence in America’s cities while inflicting massive violence in Southeast Asia. Both presidents were fond of proclaiming fervent wishes for peace.
But unlike the horrific war in Southeast Asia, the ongoing and open-ended “war on terror” is not confined by geography or, apparently, by calendar. The search for enemies to smite (and create) is availing itself of a bottomless pit, while bottom-feeding military contractors keep making a killing.
Beyond the worthy goal of repealing the Authorization for Use of Military Force is a need for Congress to cut off appropriations for the “war on terror.” A prerequisite: repudiating the lethal mythology of righteous war unbounded by national borders or conceivable duration.
What may be even more difficult to rescind is the chronic disconnect between lofty oratory and policies digging the country deeper into endless war.
“We, the people, still believe that enduring security and lasting peace do not require perpetual war,” President Obama said in his 2013 inaugural address, after four years of doing more than any other president in U.S. history to normalize perpetual war as a bipartisan enterprise.
Repealing the Authorization for Use of Military Force will be very hard. Revoking the power to combine lovely rhetoric with pernicious militarism will be even more difficult.

Norman Solomon is co-founder of RootsAction.org and founding director of the Institute for Public Accuracy. His books include “War Made Easy: How Presidents and Pundits Keep Spinning Us to Death” and “Made Love, Got War: Close Encounters with America’s Warfare State“.
Donate
By Rise Up TimesPublished On: February 20th, 2013Comments Off on Congress: End Endless War and Stop Becoming “the Evil That We Deplore”