I am hurting too

The hurt of militarized authoritarianism in Singapore, Afghanistan and the world

It’s hard for me, an ordinary citizen of Singapore, a medical doctor engaged in social enterprise work in Afghanistan and a human being wishing for a better world, to write this from Kabul.
But people are dying.
And children and women are feeling hopeless.
“What’s the point in telling you our stories?” asked Freba, one of the seamstresses working with the Afghan Peace Volunteers to set up a tailoring co-operative for Afghan women. “Does anyone hear? Does anyone believe us?”
Silently within, I answered Freba with shame,” You’re right. No one is listening.”
So, I write this in protest against my government’s presence in the humanitarian and war tragedy of Afghanistan, as a way to lend my voice to Freba and all my Afghan friends.
I do so in dissent, against the global security of imprisoned minds.
I thought, “If no one listens as humans should, we should at least speak like free men and women.”
Singapore’s complicity in the humanitarian and war tragedy of Afghanistan
It is clear that the Taliban, the many Afghan and regional warlords, militia groups and the Afghan government are responsible for the current humanitarian and war tragedy of Afghanistan.
But Singapore is also responsible because it is one of the fifty U.S. /NATO (the North Atlantic Treaty Organization) coalition countries working with the corrupt Afghan government ( rated the most corrupt country in 2012 ).
While the Singapore government would never support any corrupt Singaporean leader even for a day, they have sent troops to support the most corrupt leaders on earth! If accountability is at all important, we cannot say, ‘Oh…never mind!”
Moreover, Singapore has inadvertently become a minor accomplice of the self-interests of the U.S. government in Afghanistan ; The U.S. Vice President , Joe Biden, spoke at the Munich Security Conference recently, “The United States is a Pacific power. And the world’s greatest military alliance ( NATO ) helps make us an Atlantic power as well. As our new defense strategy makes clear, we will remain both a Pacific power and an Atlantic power.”
American power and economic interests naturally do not include the best interests of ordinary Singaporeans or Afghans.
The Afghan humanitarian tragedy
In the normal, logical world, it should inspire the doubt and curiosity of Singaporeans that while the U.S. /NATO coalition was spending billions of dollars every week on the Afghan war ( the U.S. alone was spending two billion dollars every week ), Afghans have been perishing under one of the highest infant and maternal mortality rates in the world. At least 36% live below the poverty line and 35% of Afghan men do not have work . The UN calls the acute malnutrition of nearly one million children in the Afghan south ‘shocking’ . Almost three quarters of all Afghans do not have access to safe drinking water .
On several occasions in the past few years, Afghanistan was declared the worst country for children and women, and yet, many of us still hold this warped presumption, “Afghanistan is the worst country for children and women but whatever we are doing over there MUST somehow be right!”
The Afghan war tragedy
In the normal, logical world, it should at least matter to ‘result-orientated’ Singaporeans that the very expensive Afghan/U.S. coalition’s ‘war against terrorism’ has increased rather than decreased ‘terrorism’, with the Global Terrorism Index reporting that terrorist strikes in the region have increased four times since the start of the Iraq war in 2003.
Even President Karzai said in the UK recently that the security situation in southern Helmand province of Afghanistan was better before British troops were deployed.
Adding to this cynical mess of increased ‘terrorism’ at the hands of global superpowers, the U.S. has established an epicenter of drone warfare in Afghanistan, with Afghans and Pakistanis and other ‘insurgents’ as their ‘targets’, and Singapore as one of their many allies. Singapore has had teams helping in drone reconnaissance operations, reconnaissance that may have eventually ended up with a U.S. /NATO decision to kill someone without trial.
I had raised this personal concern once in a meeting room at Singapore’s Ministry of Foreign Affairs ; I was appreciative of the attentiveness given to this issue, but sensed that there was no great interest in ‘investigating’ how Singapore’s co-operation in the drone operations in Afghanistan may be violating international law, as was suggested by the ex-UN Special Rapporteur on Extra Judicial, Summary or Arbitrary Killings, Mr Philip Alston.
A recent New York Times article highlights these ‘fears  for U.S. allies’, reporting on a lawsuit in the British courts that ‘accuses British officials of becoming “secondary parties to murder” by passing intelligence to American officials that was later used in drone strikes.’ My life has been changed by listening to Afghan friends like Raz Mohammad tell how ‘drones bury beautiful lives’. 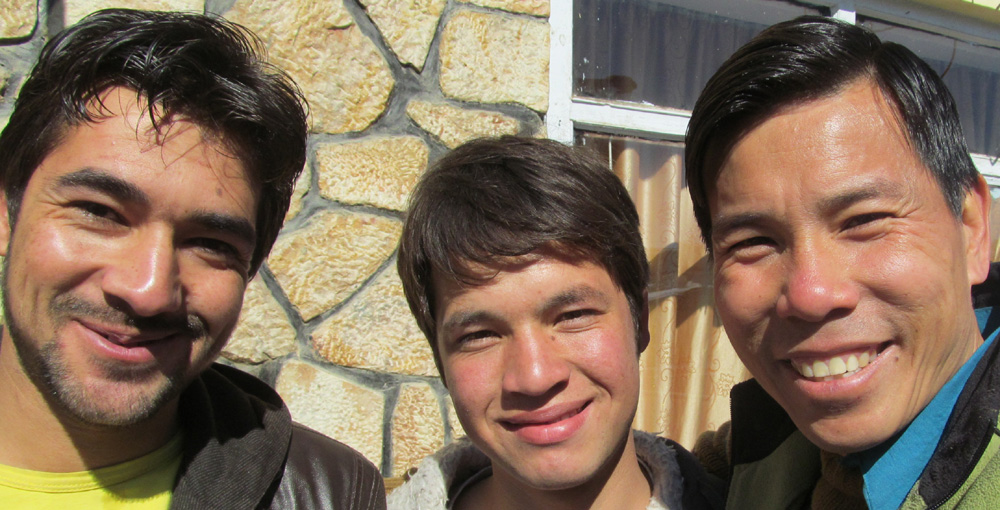 Raz Mohammad, Abdulhai and I in Kabul, Afghanistan

The U.N. is finally living up to its charter to ‘remove the scourge of war’ by duly investigating  drone warfare. Major U.S. newspapers are also asking for more transparency over Obama’s weekly, premeditated ‘kill lists’. There has been concern over unchecked Powers getting even more out of all jurisdictions with the appointment of ‘drone justifier’ John Brennan as Obama’s CIA Director nominee.
Even the UN Committee on the Rights of a Child has been “alarmed” at reports of the deaths of hundreds of children from US attacks and air strikes in Afghanistan since the committee last reviewed U.S. practices in 2008.
Singapore should be alarmed too.
Singapore’s own identity as a militarized, authoritarian country
Deep within, like most human beings, Freba yearns for a decent livelihood without war. Abdulhai and the Afghan Peace Volunteers wish for friends from all 195 countries of the world, a better world without borders!
What kind of identity do Singaporeans wish for their country, a peaceful and friendly country or otherwise?
Again, I’m concerned. We like pictures of be-medaled soldiers more than unsung ‘Mother Teresa’ heroines. Our government has a significant number of ex-military commanders.
According to the Global Militarisation Index released by the Bonn International Centre for Conversion (BICC), Singapore has been the second most militarized nation in the world for years. The latest ranking puts Singapore just second to Israel and one brutal position more militarized than Syria.
What also worries me is that this militarized mindset may be behind Singapore’s enthusiasm in the drone show-business, and in ‘unintentionally’ being part of the U.S.’ ‘Asia pivot’ by hosting four U.S. littoral combat ships.
Even on the economic front, while Singapore has one of the higher Gini coefficients of income inequality in the world, not many people in Singapore are aware of or debating Singapore’s participation in the Trans-Pacific Partnership , again a partnership that corporate America is pushing for.
What Singapore has aligned herself with in Afghanistan is militarized authoritarianism that concentrates profit and power in the hands of a few. While this follows global norms, such a system works mainly for the wealth and power of the 1% in the short term, but not for the daily needs of the 99% in either the short or long term.
I personally think that both the democratic and socialist practices of today are ‘non-progressive’ vehicles for the rule of the few ‘Kings, Emperors, Presidents, and Prime Ministers’ over the many presumably ‘ignorant, helpless and sometimes lazy’ subjects. These elitist systems tend to maintain control by ‘pacifying the masses’ through formal education, mainstream media and force.
I hope Singapore can steer itself away from this ‘norm’, an ugly ‘norm’ in which war becomes fun, like when Prince Harry described his combat pilot job in Afghanistan as “a joy … because I’m one of those people who loves playing PlayStation and Xbox, so with my thumbs I like to think I’m probably quite useful.”
I believe that for effective defense and genuine security, we ought to be friends with neighbours and all peoples of other lands rather than militarists with superior weapons.
Perhaps these are differences in opinions which can be included in Our Singapore Conversation.
It’s hard for me to write this, but I am sincerely ashamed to be a citizen of the 2nd most militarized nation on earth, a country that has participated in the legally-questionable drone warfare in Afghanistan.
Thankfully, I have hope in Singaporeans like I have hope in humanity. There are alternatives. The world is awakening, the human race is revolutionizing, and so is Singapore’s electorate. Most ordinary folk in the world don’t want to send missiles or guns to kill strangers in other places! Human beings have always preferred otherwise.
My voice is not political. My voice is human.
Afghans are hurting very badly.
And I am hurting to0.
Subscribe or “Follow” us on riseuptimes.wordpress.com. For the TC EVENTS calendar and the ACTIONS AND ACTION ALERTS click on the tab at the top of the page and click on the item of interest to view. WAMMToday is also on Facebook! Check the WAMMToday page for posts from this blog and more! “Like” our page today.

Donate
By Rise Up TimesPublished On: February 10th, 2013Comments Off on I am hurting too> The hurt of militarized authoritarianism in Singapore, Afghanistan and the world