A Message from Beyond the Wall

Thumbing its nose at the international community in this holiday season, the Israeli government is going ahead with building thousands of housing units in existing and new Jewish colonization settlements in Bethlehem and Jerusalem areas.

Editor’s Note: Palestinians in Bethlehem are occupied, walled in, divided from each other, deprived of rights, dispossessed of property. They are cut off from starved, bombed, and traumatized Palestinians in Gaza, who are under a draconian siege. Yet Palestine survives to proclaim, “We are still here today!” 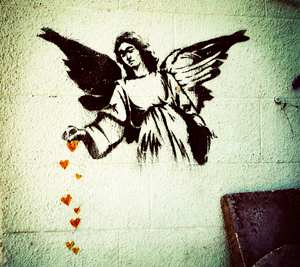 An angel stencil in Bethlehem by London-based, wall-graffiti artist Banksy who made images on buildings and the Segregation Wall in Palestine. Also see: This Way Over the Wall
After living 29 years in the U.S., it is not easy to be living in the Bethlehem area. Life can at times be hard, exhilarating, depressing, fun, and hopeful. Israel occupied this area in 1967, but the landscape had begun to change well before that. In 1948, Bethlehem became home to thousands of Palestinian refugees after more than 750,000 people were driven from their homes in what became Israel. Palestinians were forbidden to return, and three cramped refugee camps (Dheisheh, Azza, and Aida) add to the local migrants from villages whose lands were taken over.
The 180,000 native Christians and Muslims of Bethlehem are now restricted to development in only 13 percent of the district land. Some 87 percent of our land is now controlled by a ring of colonial settlements, military zones, and infrastructure restricted to Israeli occupiers’ use. Since 2002, we have faced the enormous human costs of a massive, concrete segregation wall. The wall zigzags around Bethlehem, placing fertile Palestinian agricultural lands and most of our water resources on the “Israeli side” and in many cases goes straight through centuries-old villages—separating Palestinian families from each other and from their jobs, hospitals, schools, churches, and mosques. The existence of the wall and checkpoints means that many faculty and students can no longer make it to school at Bethlehem University and our student body has steadily lost its geographic diversity. The biblical and literal path from Nazareth to Bethlehem is blocked by many checkpoints and 30-foot-high slabs of concrete. 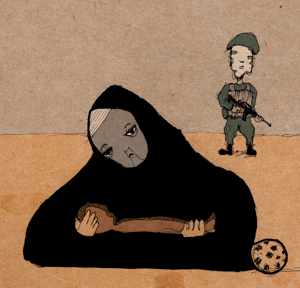 Nidal El-Khairy, a Palestinian illustrator for Electronic Intifada, portrayed the mourning mother of 13-year-old Hamid Younis Amid who was killed by Israeli machine-gun fire while playing soccer in front of his house in Gaza on November 8 at the beginning of Operation Pillar of Defense.

Many of my relatives lost jobs in Jerusalem or lost livelihoods that depended on the city of which we are a suburb. It is virtually impossible for West Bank Palestinians to obtain permits to enter Jerusalem or for Jerusalemites to engage in commerce with us. Even if one gets a rare permit, checkpoints make travel unpredictable and often impossible, precluding maintaining a decent economy. Unemployment is now at 45 percent, nearly twice what it was during the U.S. Great Depression. But we can be thankful that we are not living in Gaza, where things are far worse and where in just one week in November [2012??], Israeli attacks killed 191, including 48 children. Yet the whole area feels like a ticking time bomb.
Israel’s desire to acquire maximum geography with minimum Palestinian demography is the root of the suffering afflicting the Holy Land. Today there are nearly seven million Palestinian refugees and displaced people. Amnesty International has observed that the “peace processes” failed because Israel has ignored human rights, including the right of native Palestinians to return to their homes and lands. There is now a broad international consensus (with the exceptions of the U.S. and Israeli governments) on the danger to international peace and security posed by Israel’s continued violations of human rights and international law. Clearly, if one wants peace in the Middle East and beyond, the path starts by giving justice to Palestinians. I am doubly pained as an American and a Palestinian Christian because my taxes support this 60-year carnage. Israel is the largest recipient of U.S. foreign aid, and the U.S. administrations still go out of their way to cater to Israeli lobby influences.
Israel as the occupying power is responsible for the welfare of those under its belligerent military rule per the applicable Geneva conventions. Yet Israel has intentionally de-developed the Palestinian economy. With the collusion of the EU and the U.S., the economy of the West Bank and Gaza became even more dependent on Western “humanitarian aid.” Some 30 percent of this aid is siphoned off into Israel and some 30 percent goes to support Palestinian “security forces” whose job seems to focus not on protecting Palestinians from settler attacks but to fight any Palestinian who dares to resist the occupation or challenge the usurpation of his land.
There is a system of corruption involving governments and “authorities.” This is coupled with a media strategy that makes it look as if the only choices available to Palestinians are to blow themselves up or to capitulate and enter into endless negotiations. This sad state of affairs did not just happen but was engineered and is actively managed to perpetuate occupation and dependency. Why else would Israel deny entry to academics coming to teach at the universities here, or deny entry of equipment for even the simplest of industries? Why deny Gaza electric power and equipment to treat the sewage and thus let the sewage of 1.5 million people flow into the Mediterranean Sea, polluting Europe and even Tel Aviv? 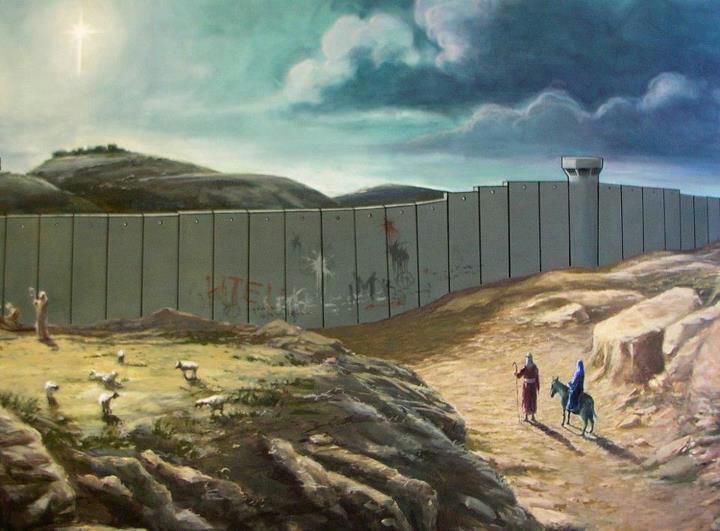 No Hallmark Greeting: Travelers are arrested by the 30-ft. high Segregation Wall and watchtower. The Wall blocks Mary and Joseph. Banksy image.
Cards with image: IfAmericansKnew.org

The logic of military and political power dictates that Israel is now building more Jewish settlements and demolishing more Palestinian homes and farms in spite of its obligations under signed agreements and under International law. The Obama administration and Congress (beholden to the pro-Zionist lobby) stand isolated among the community of nations in their support of this apartheid regime.
But we are hopeful, because history is not static. Here in Bethlehem, we derive strength from knowing that previous foreign military occupations came and went, including the Roman one that existed in Jesus’ time. We derive hope from the fact that the Crusades ended after 130 years of suffering caused by trying to change this country to become more monolithic. Zionism is also bound to fail in its similar task. We derive hope from thousands of visitors who come every year to show us solidarity. We derive energy from our work for peace with justice. We derive strength from the positive reaction received by churches around the world for the Palestine Kairos document. We derive strength from the growth of the boycotts, divestment, and sanctions movement (à la that implemented against apartheid in South Africa).
In this season celebrating the birth of Jesus, let us all resolve to work to end racism, occupation, and apartheid. Let us insist on the rights of refugees to return and build a democratic society for the entire people in the Holy Land. When we succeed, people of all religions (Jews, Christians, and Muslims) and all backgrounds will share this small piece of earth in harmony and peace.
Professor Mazin Qumsiyeh teaches and is a researcher at Bethlehem and Birzeit Universities in occupied Palestine. He serves as chairman of the board of the Palestinian Center for Rapprochement Between People and coordinator of the Popular Committee Against the Wall and Settlements in Beit Sahour. He blogs at popular-resistance.blogspot.com. His most recent book is Popular Resistance in Palestine: A History of Hope and Empowerment.
Editor’s Note: Because the Segregation Wall weaves in and out of Palestine, its people have been forced into separation from each other, parts of their own infrastructure, and the world. But the Wall is more than a material object, it is also an invisible shield keeping most Americans from hearing the Palestinian perspective, because Washington and the mainstream media favor the occupiers, whose policies, military, and weapons are supported by U.S. tax dollars. As a result, we are dependent on people-to-people connections to get glimpses beyond this wall. In one of these too rare but precious instances, this past November, Mazin Qumsiyeh gave a talk in Minneapolis, sponsored jointly by Middle East Peace Now and the Middle East Committee of Women Against Military Madness. On returning home to Palestine, he wrote this article.
© 2012-2013 Women Against Military Madness. All rights reserved.
Subscribe or “Follow” us on riseuptimes.wordpress.com. For the TC EVENTS calendar and the ACTIONS AND ACTION ALERTS click on the tab at the top of the page and click on the item of interest to view. WAMMToday is also on Facebook! Check the WAMMToday page for posts from this blog and more! “Like” our page today.

Donate
By Rise Up TimesPublished On: December 21st, 2012Comments Off on Mazin Qumsiyeh> A Message from Beyond the Wall